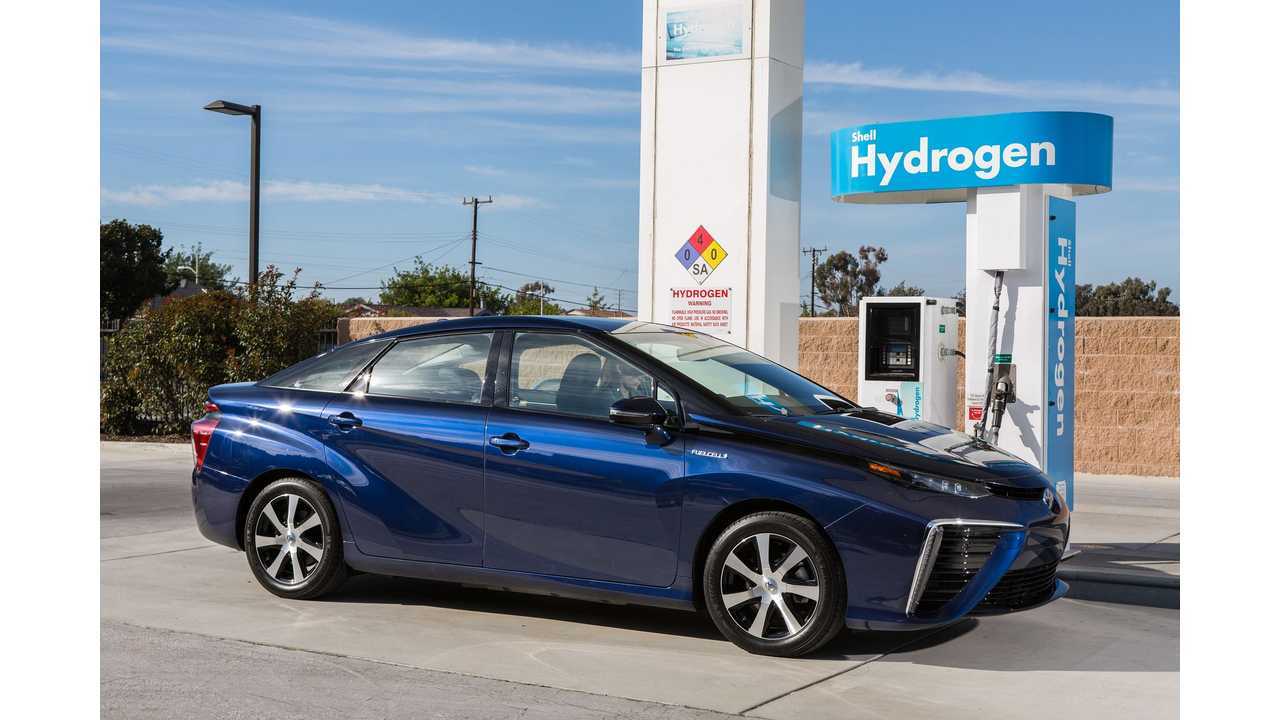 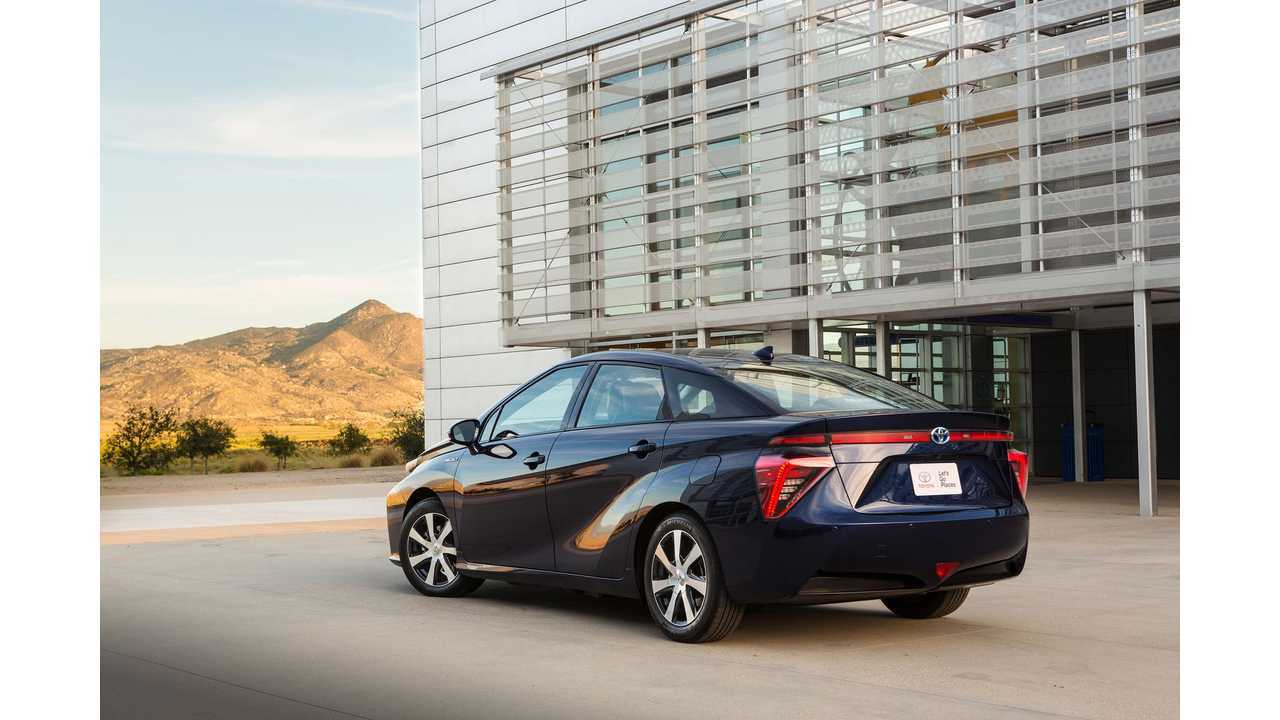 Mirai is now one of the most important products for Toyota, as the Japanese company finally decided to bring its first fuel cell cars to the market.

After the launch event last night, we found a lot of new data on this car in the video briefing.

After deducting incentives, Toyota expects a price of $45,000!

In Europe, the launch is scheduled for September 2015 - UK, Germany and Denmark. 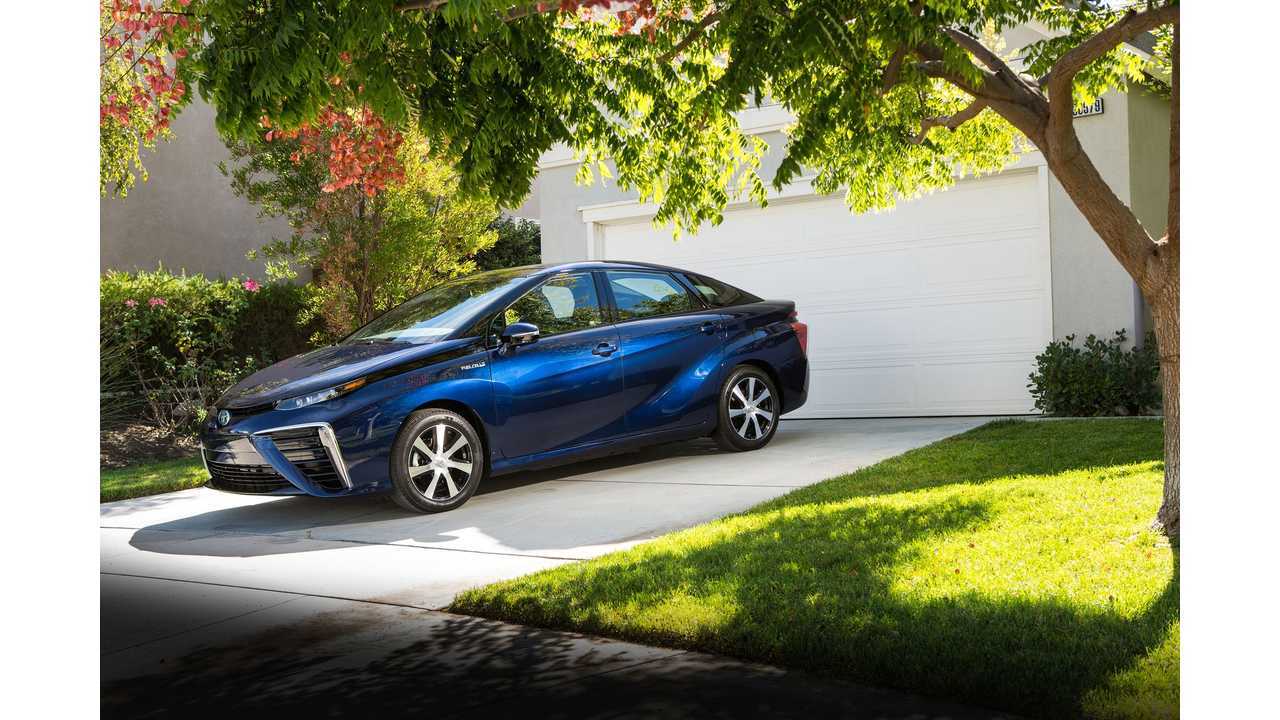 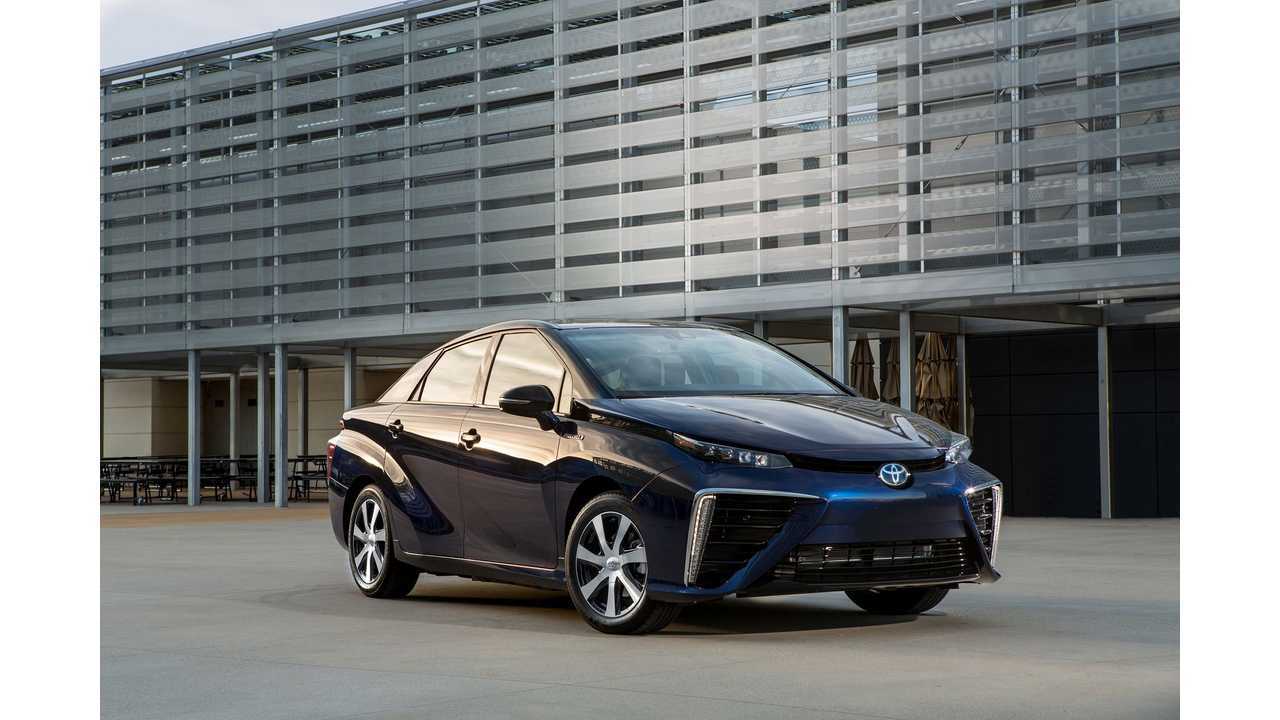 Sadly we still can't treat Mirai as a series production car, because in the first year Toyota would like to sell just 400 of them and already gathered in Japan orders for 200. There will be long waiting time in the beginning.

Toyota began developments of FCV in 1992, before Prius hybrid, so it took 23 years to slowly commercialize. This is a low pace for sure..

In California, the plan is to deploy 3,000 units on the roads by the end of 2017! The first will appear in the fall of next year.

"Mirai will hit the streets of California in the fall of 2015.

Volume will be restricted during the fourth quarter, to less than 200 vehicles, but will steadily increase, totaling more than 3,000 units by the end of 2017."

In Europe, the number of deliveries will be even lower: 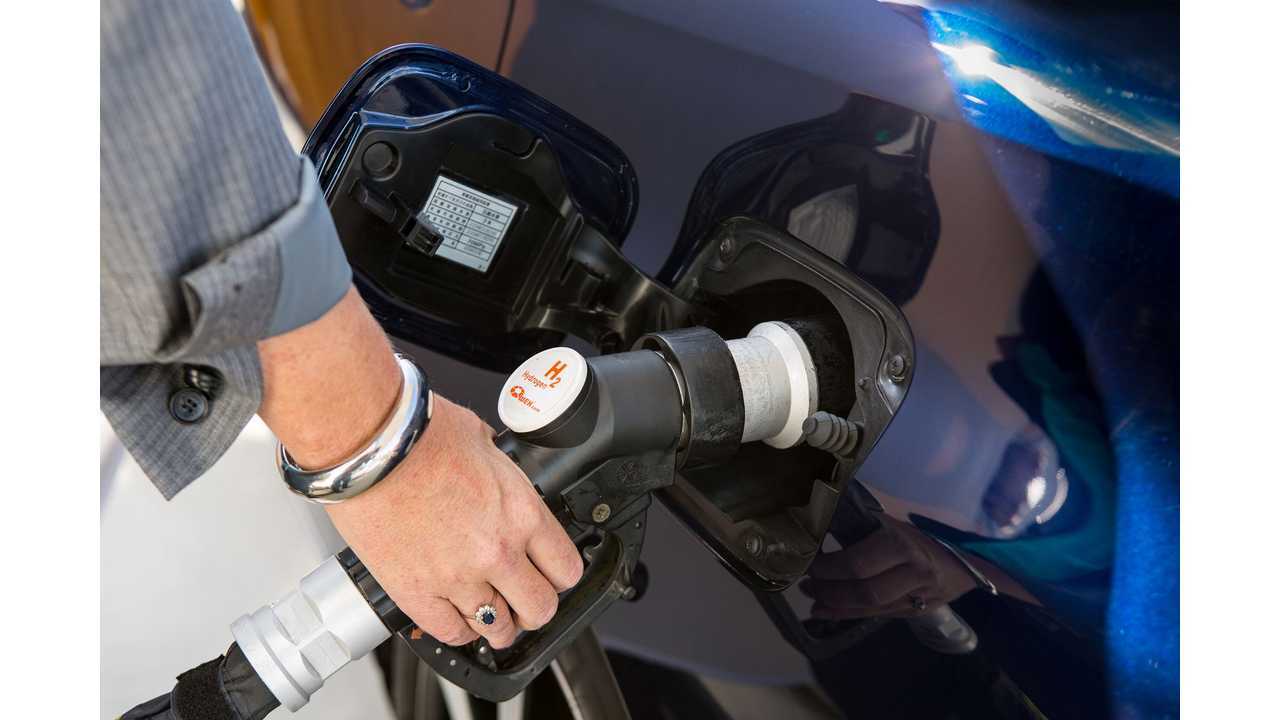 Toyota presented at the press conference a short crash test video and stressed that hydrogen tanks were not even deformed.

Mirai will be equipped with special H2O button to release the water - just in case you are thirsty or would like to show your friends how green the car is (sort of).

Asked about just 4 seats, while Honda released a 5-seat concept car at the same time (with fuel cell stack under the hood), Toyota stated that Mirai will be more of a luxury car with comfortable rear seats.

We saw in the first video that there is a CHAdeMO inlet shown that could supply electricity.

Toyota seems to have some cooperation with Honda in this matter, as both companies stated capability of supplying up to 9 kW DC power from the car (via CHAdeMO) to the external inverter (an optional power take off (PTO) device), which will turn it to AC and enable the car to power electrical appliances or maybe even a whole house.

With a full tank of hydrogen, Mirai should be able to provide approx. 60 kWh of energy so you could survive (with a working fridge) a few more days than others when the zombie apocalypse strikes. 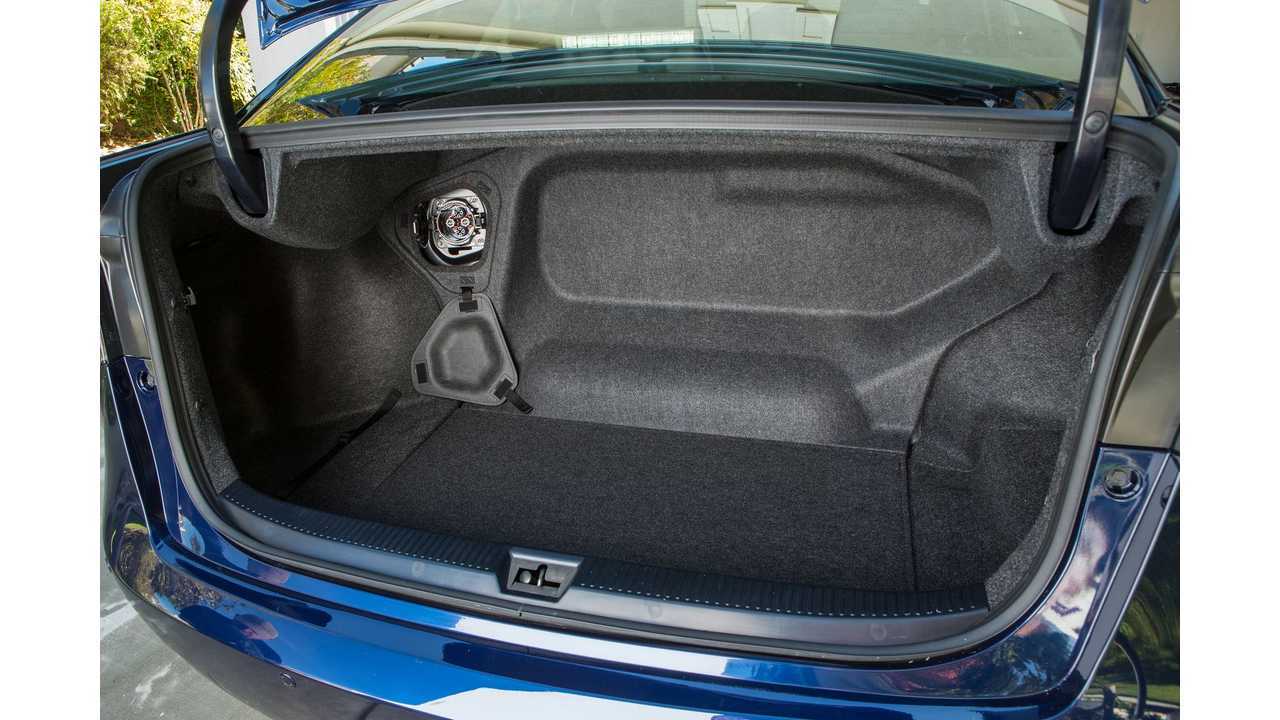 Toyota Mirai - CHAdeMO in the trunk 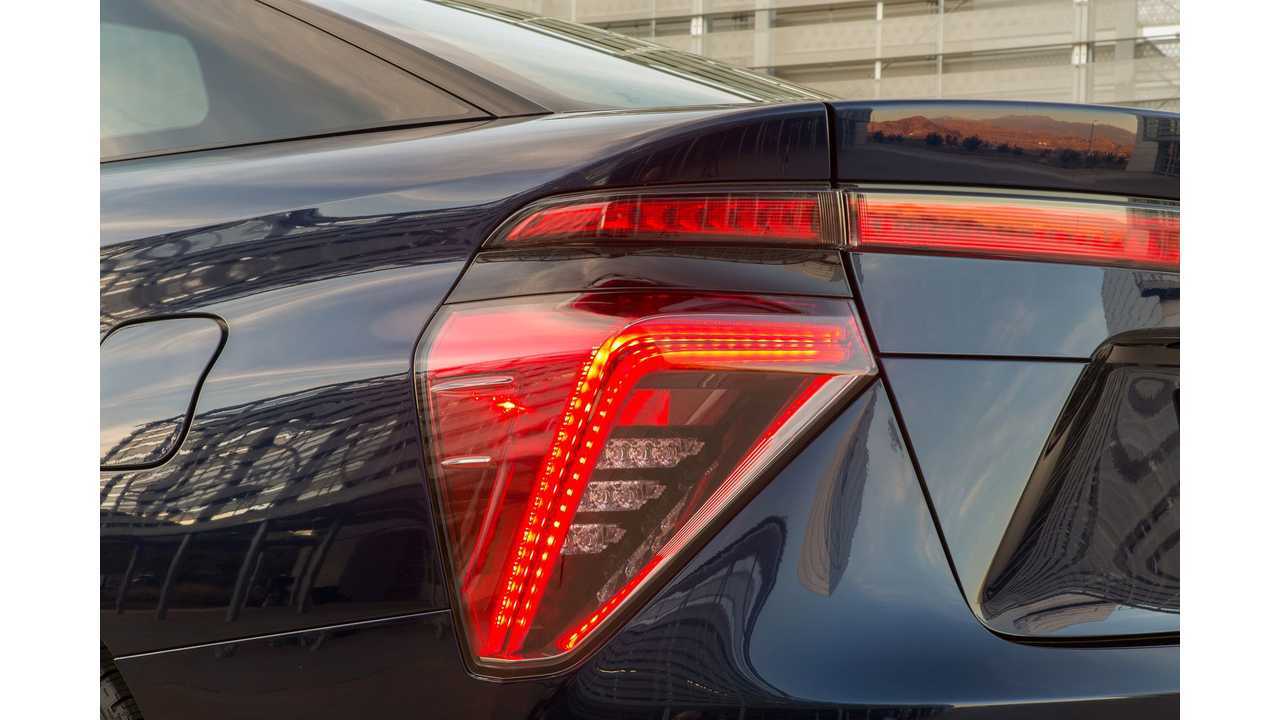 Range is about 300 miles and it takes 3 minutes to refuel.

Interesting is curb weight of Mirai at 4078.5 lbs (some 1,850 kg), which means that fuel cells don't have a weight advantage over EVs. Nissan, for example, could add more battery capacity into the LEAF and still stay within the same weight and price tag of Mirai. 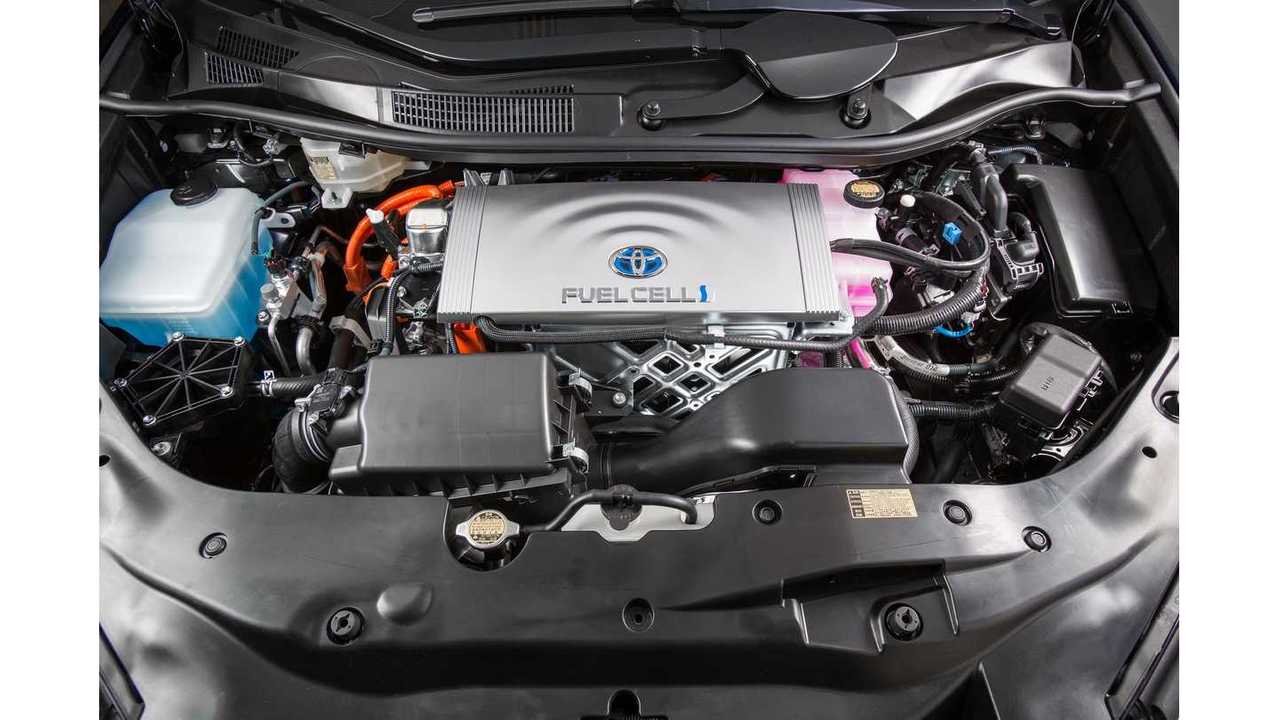 Toyota Mirai under the hood 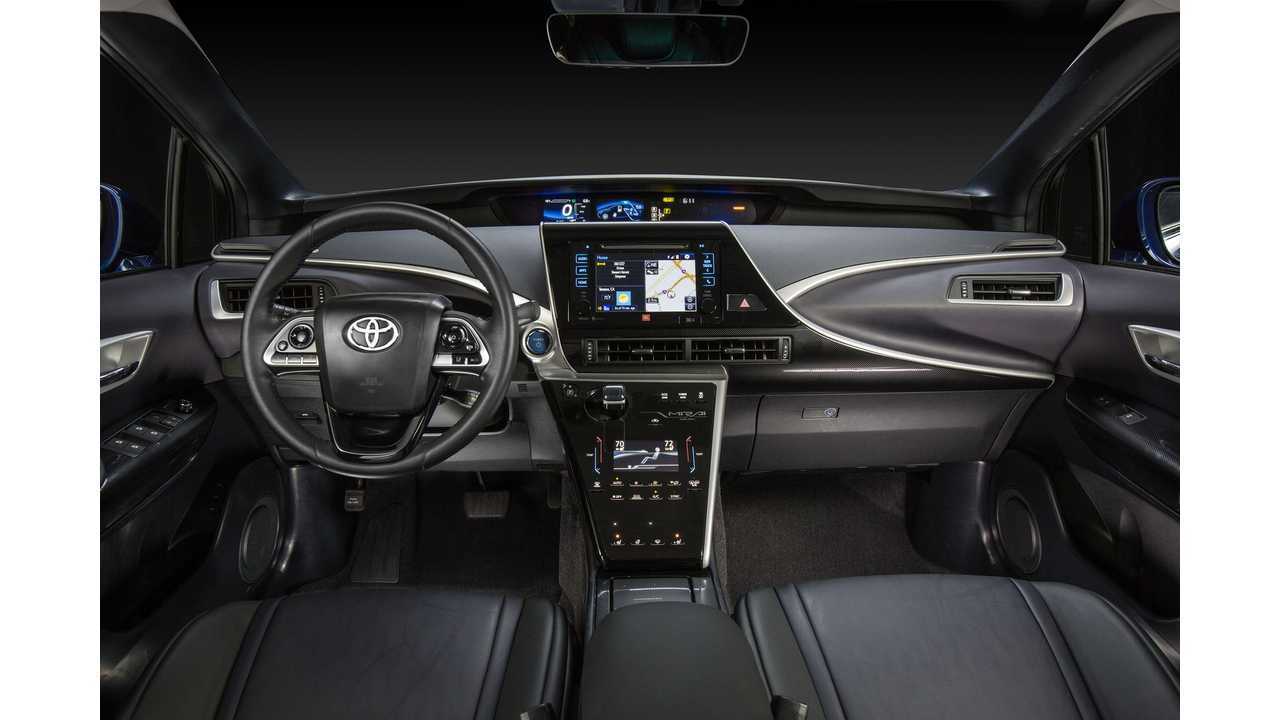 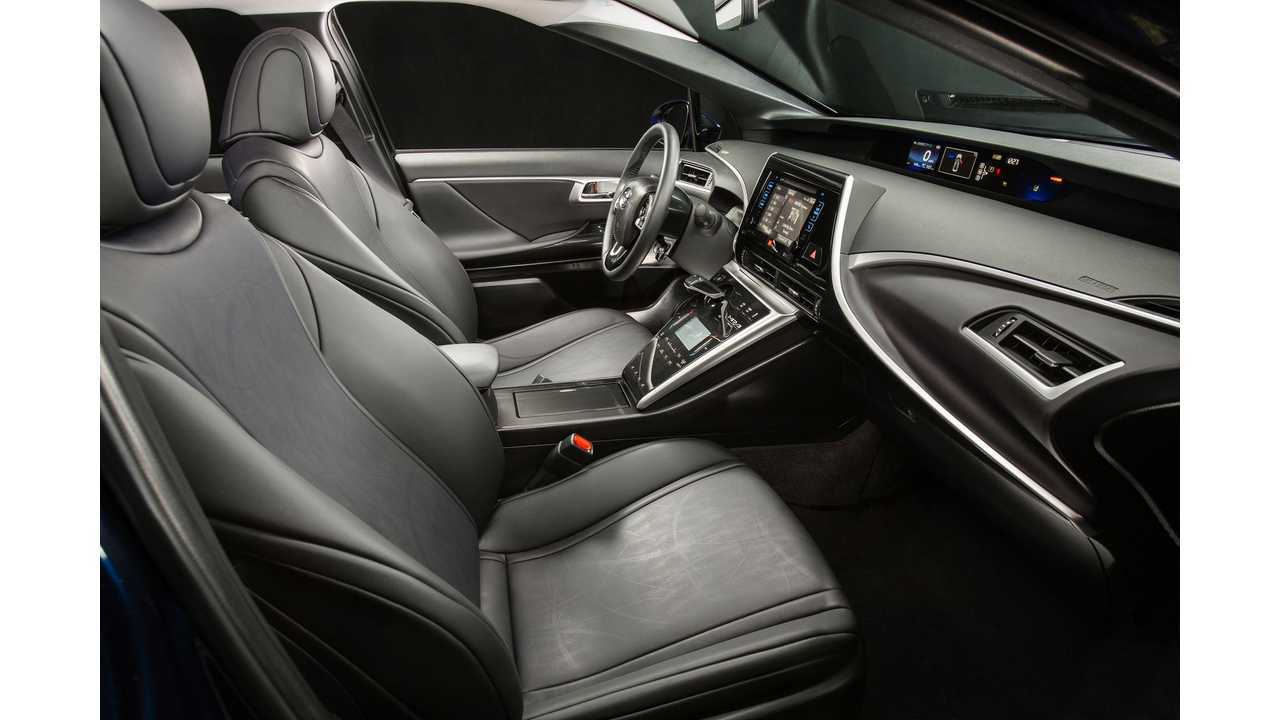 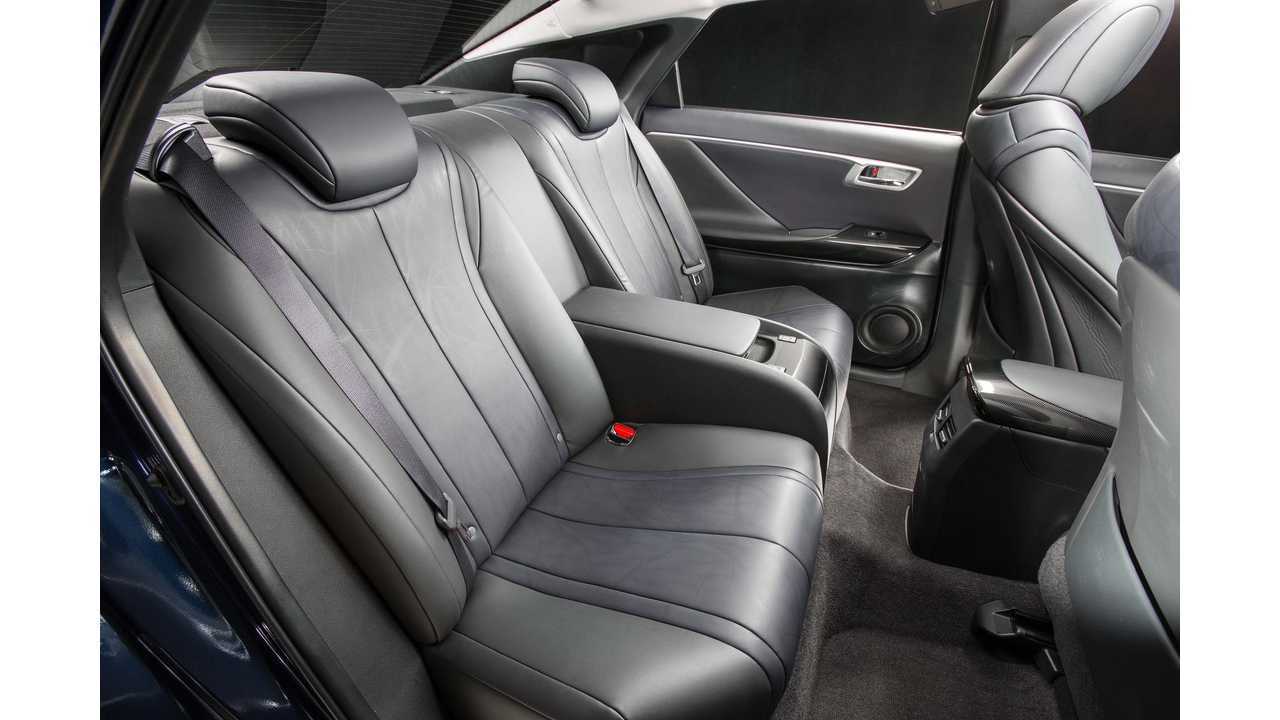 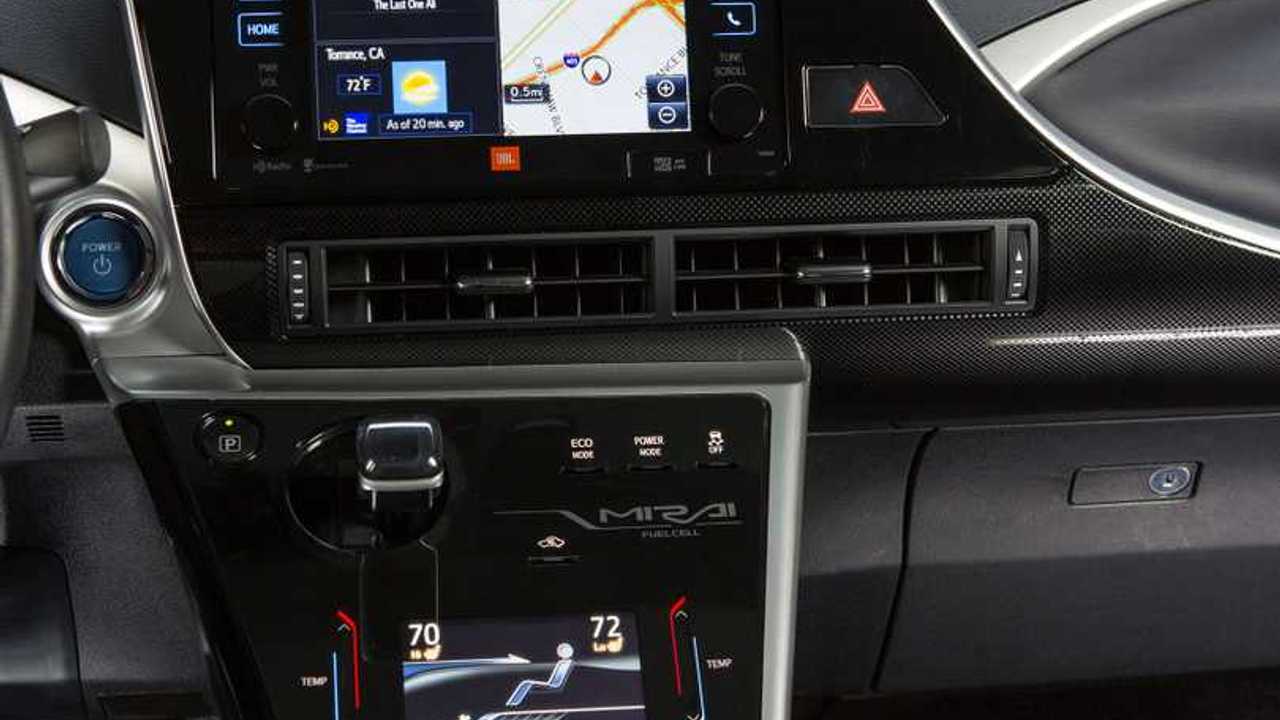 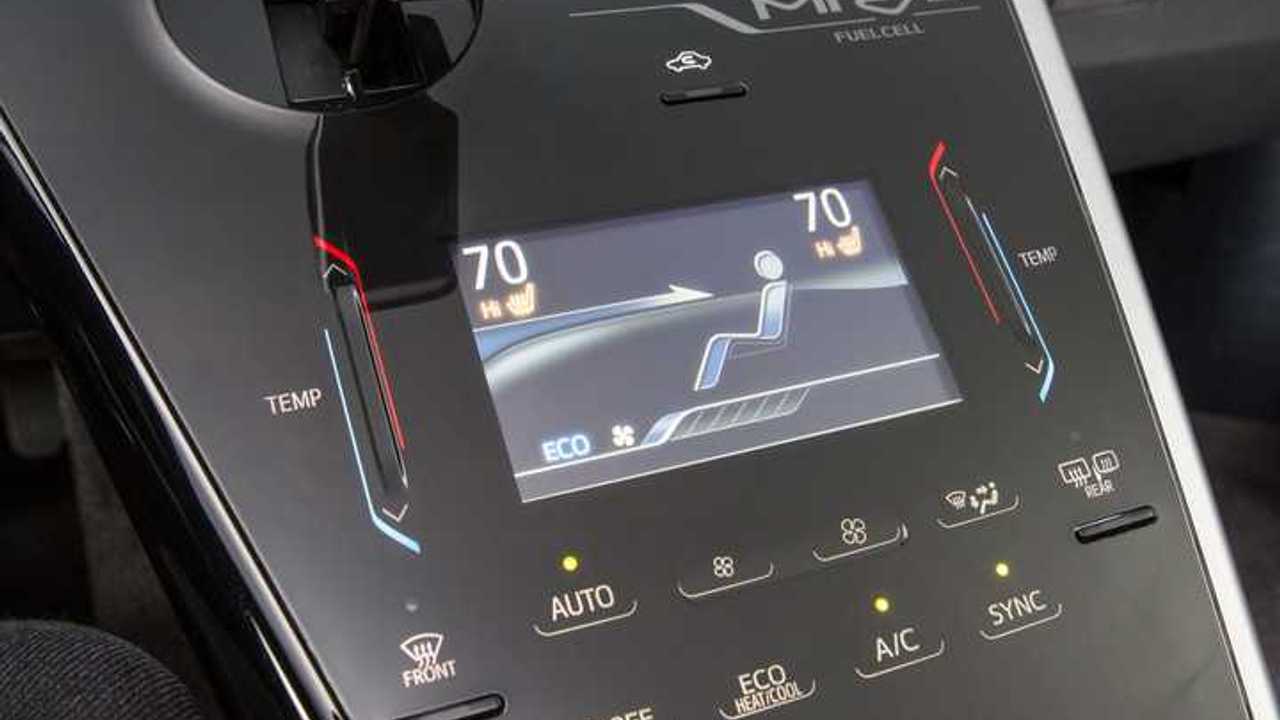 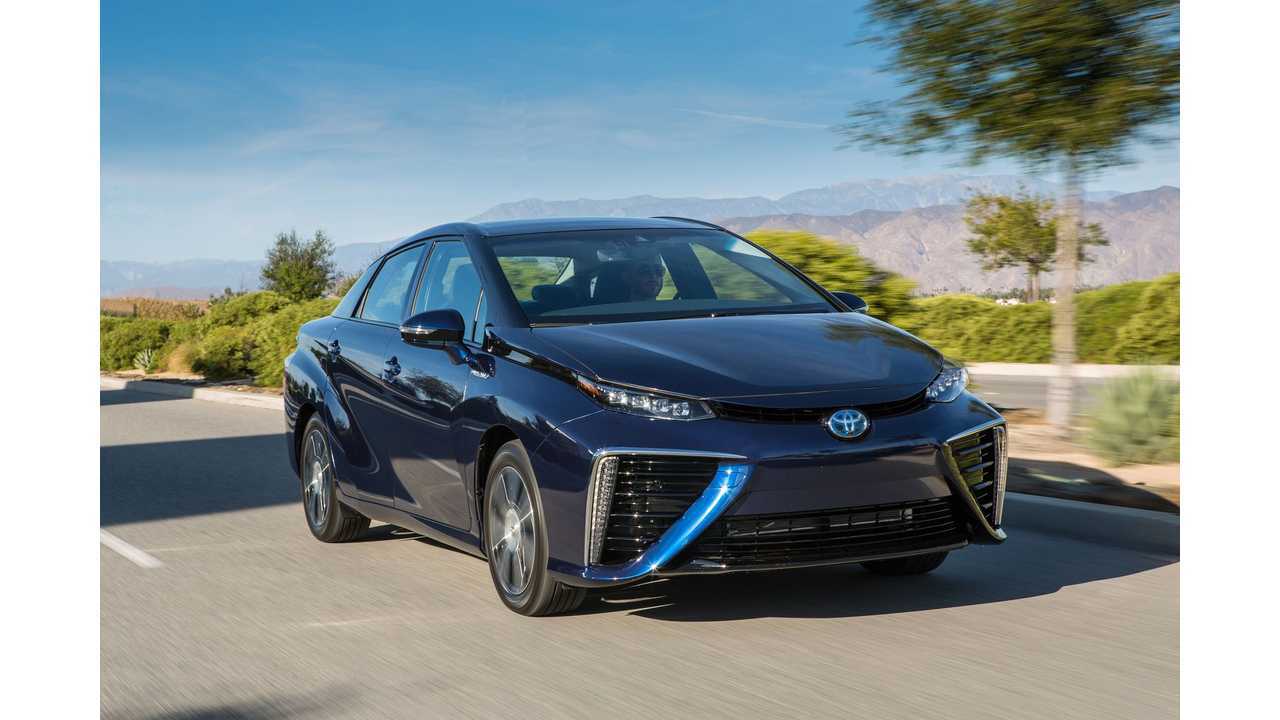 The Toyota Mirai is a four-door, mid-size sedan with performance that fully competes with traditional internal combustion engines – but it uses no gasoline and emits nothing but water vapor. The groundbreaking fuel cell electric vehicle is powered by hydrogen, re-fuels in about five minutes, and travels up to 300 miles on a full tank.

Mirai will be available to customers in California beginning in fall 2015, with additional markets tracking the expansion of a convenient hydrogen refueling infrastructure. Powered by an industry-leading fuel cell electric drivetrain and supported by an exceptional 360-degree ownership experience, Mirai marks a turning point for consumer expectations for a zero-emission vehicle.

Making its Mark with Performance In its basic operation, a fuel cell vehicle works much like a battery electric vehicle. But instead of the large drive battery, Mirai’s fuel cell stack combines hydrogen gas from tanks with oxygen to produce electricity that powers the electric motor.

Toyota’s proprietary fuel cell stack represents a major leap forward in performance, delivering one of the world’s best power outputs of 3.1 kW/L at a dramatically reduced size that fits under the front driver and passenger seats. The system provides Mirai with a maximum output of 153hp, accelerating from 0-60 in 9.0 seconds and delivering a passing time of 3 seconds from 25-40 mph.

What’s more, thanks to fuel cell technology’s versatility and adaptability, the Mirai offers performance options that go well beyond a traditional automobile. In fact, the vehicle will be offered with an optional power take off (PTO) device that enables Mirai to serve as a mobile generator in case of emergency. With the PTO accessory, Mirai is capable of powering home essentials in an average house for up to a week in an emergency – while emitting only water in the process.

Safe and Reliable Transportation Toyota began fuel cell development in Japan in the early 90s and have developed a series of fuel cell vehicles, subjecting them to more than a million miles of road testing. In the last two years alone, fuel cell test vehicles have logged thousands of miles on North American roads. This includes hot testing in Death Valley, cold testing in Yellowknife, Canada, steep grade hill climbs in San Francisco and high altitude trips in Colorado. The Toyota-designed carbon fiber hydrogen tanks have also undergone extreme testing to ensure their strength and durability in a crash.

This extended legacy of research and development is reflected in Mirai’s safety and reliability.  At Toyota’s advanced Higashifuji Safety Center, the vehicle has been subjected to extensive crash testing to evaluate a design specifically intended to address frontal, side and rear impacts and to provide excellent protection of vehicle occupants.  A high level of collision safety has also been achieved to help protect the fuel cell stack and high-pressure tanks against body deformation.

Focused on the Consumer Toyota believes that outstanding vehicle performance must be matched by an exceptional ownership experience.  And Toyota is committed to delivering on that promise.

When it hits the market in 2015, customers can take advantage of Mirai’s $499 per month/36 month lease option, with $3649 due at lease signing, or purchase the vehicle for $57,500.  With combined state and federal incentives of $13,000 available to many customers, the purchase price could potentially fall to under $45,000.

The vehicle will be matched by a comprehensive, 360-degree Ownership Experience offering a range of services, including:

Building a Convenient Refueling Infrastructure In addition, Toyota continues to support the development of a convenient and reliable hydrogen refueling infrastructure.

Research at the University of California Irvine’s Advanced Power and Energy Program (APEP) has found that 68 stations, located at the proper sites, could handle a FCV population of at least 10,000 vehicles.  Those stations are on their way to becoming a reality. By the end of 2015, 3 of California’s 9 active hydrogen stations and 17 newly-constructed stations are scheduled to be opened to the general public, with 28 additional stations set to come online by the end of 2016, bringing the near-term total to 48 stations.

Nineteen of those 48 stations will be built by FirstElement Fuels, supported by a $7.3 million loan from Toyota.  The company has also announced additional efforts to develop infrastructure in the country’s Northeast region.  In 2016, Air Liquide, in collaboration with Toyota, is targeting construction of 12 stations in five states – New York, New Jersey, Massachusetts, Connecticut, and Rhode Island."

And here we have specs:

This table provides technical specifications for the Toyota Mirai with comparative values for the previous SUV-based FCHV-adv fuel cell vehicle. Toyota previously made FCHV-adv available in very limited numbers as a lease vehicle.

Here is a link to the video site.