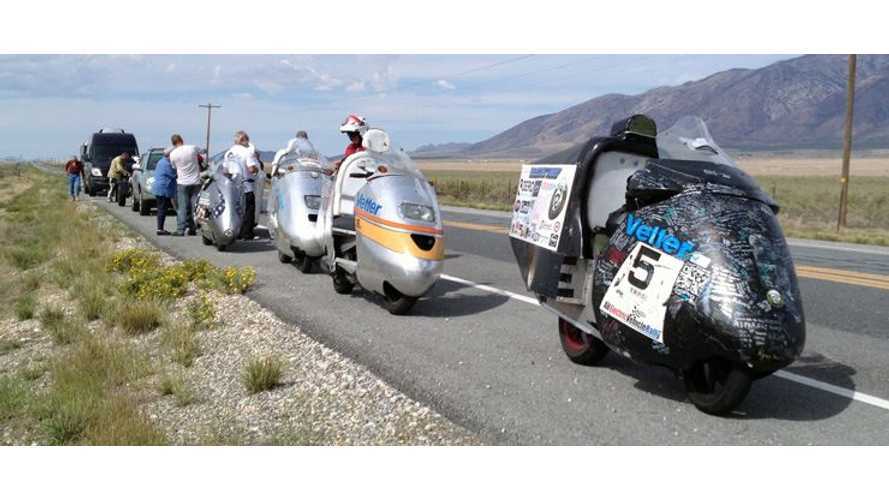 In the annual Vetter Challenge, Terry Hershner scored a decisive victory and once again made it into the record books with a first-ever win for electric motorcycles.

"The Craig Vetter Fuel Economy Challenge demonstrates how motorcycles can help us live better with less energy," said Challenge founder, Craig Vetter. "The goal is to test our machines in real conditions on real roads under normal circumstances. We want to discover the least amount of energy it takes for us to travel the way we really ride."

"Nobody could come close to 'Electric Terry's' 1.3¢ per mile cost."

"Silent on the road. Clean. No film of oil on it like most bikes. Once in a while he would zip by me with amazingly rapid acceleration. Terry has shown us that an electric motorcycle can go a useful distance. My Honda Helix was on reserve at the end while Terry still had energy. 1/2 the cost of Alan Smith... and Alan got 139mpg!"

This year's Vetter Challenge was ridden between Wendover and Tooele, Utah, a ride of 172 miles, and finished near the Bonneville Salt Flats at the close of this summer's Bonneville Motorcycle Speed Trials this past week.

Terry Hershner tells InsideEVs this of his record-shattering ride:

"I rode 172 miles at speeds up to 80 mph for 1.3 cents per mile, and that was with an artificial road tax added in that gas bikes pay as per the rules of the Challenge for electric competitors. Only fair but for people who buy an electric motorcycle today, you can ride even cheaper than that!" - Terry Hershner

Hershner's bike is a heavily modified 2012 Zero S, with Vetter's full streamlining bodywork.  Here's the full story on the Vetter site and below a diagram of the added batteries and chargers:

Hershner's no stranger to getting himself into the record books on his streamlined, modified Zero electric motorcycle.  Read more on his exploits on the Facebook page "Off the Grid", and the site Off The Grid Live.

*Editor's Note: Our congrats to Terry, friend of InsideEVs, on this achievement.  Terry puts the spotlight on electric motorcycles by once again proving they're superior to two-wheelers powered by other forms of energy.