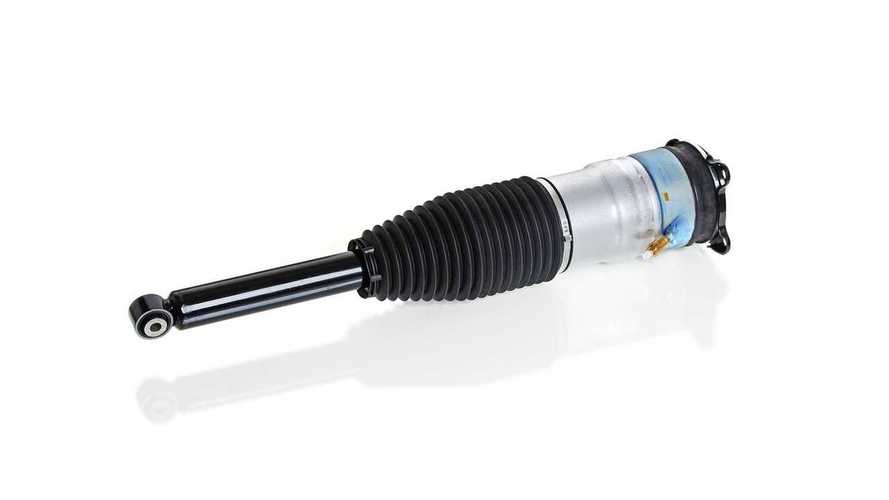 Last week, Continental released info saying that it "supplies air suspension system for an all-electric vehicle for the first time," but Continental did not reveal who is the customer (aka automaker).

Spring 2012?  Hmm...so Continental waited one and a half years to announce this and still is not saying which vehicle will use (already uses) it?

We can connect the dots Continental...you don't have to be so sly.

The Model S entered production in Spring 2012 and it's the only electric vehicle that uses an air suspension setup similar (identical) to the Continental unit shown above.

Perhaps Continental doesn't have permission to disclose who it supplies the air suspension to.

Anyways, Continental shared some interesting descriptions of this system:

Unfortunately, Even This Model S Supplier Chart (via autonews)Makes No Mention of Who Provides the Suspension Hardware - Click to Enlarge

"The vehicle is the first purely electric vehicle to be equipped with a Continental air suspension. The air suspension system we developed had to meet strict electric driving requirements but without neglecting aspects like comfort, range and driving pleasure", said Christian Hilgers, Project Manager in the Segment Suspension Systems in Continental's Chassis & Safety Division. This placed great demands on the air suspension system: low weight and low energy consumption with at least the same functionality as in other projects, and all to a tight schedule. In order to meet all these requirements the electric vehicle manufacturer consistently made use of Continental's expert knowledge of air suspension systems. Consequently, it was Continental's development of a closed air supply system with a high-performance compressor and solenoid valve block which was chosen."

"The closed air supply system pumps the air at high pressure back and forth in a circuit between the reservoir and the air springs. This allows a virtually unlimited number of rapid, consecutive changes in pressure levels", explained Christian Steinmann, Head of Segment Suspension Systems the practical benefit of this system. Changes to the ride height are either made automatically by the control electronics depending on the vehicle's speed or by the driver at the touch of a button."

"Right from the start of the project, the vehicle plus air suspension were designed as a coordinated package and, together with the manufacturer, the most important components and application parameters were specified. Many of the air suspension design's functions had already been proven in previous projects, making it possible to produce a design concept in very quick time. Software modules assembled from the so called baseline – a database containing functionalities which had already been tested and approved – were used for the Chassis Control Unit (CCU). Only the relevant communication and diagnostic parts were developed project-specifically and then the software functions were applied. The result is an integrated system, lighter than steel springs, which favors low energy consumption. The option of lowering vehicle height also leads to lower air resistance, reducing energy consumption still further."

"The components for the all-electronic vehicle electronic air suspension system are produced at the Morganton site in North Carolina in the USA. The system emphasizes Continental's expertise in developing air suspension systems individually tailored to vehicle models within short project timeframes and in supplying systems tailored to international customer needs throughout the world. Developments in electronics and innovative air bellows technology make it possible to design chassis which offer drivers maximum driving safety combined with superb comfort and sporty handling."

Below you'll find some videos with the Tesla Model S air suspension in action: