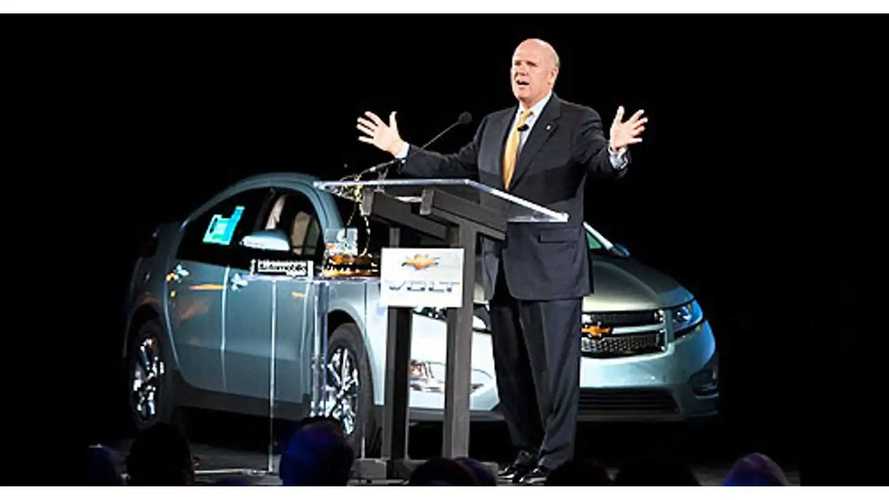 No Profit Made Yet On Chevrolet Volt, But It Is Coming...Along With A Big Price Cut

General Motor's CEO Dan Akerson was a speaker at Fortune's Brainstorm Green conference in Laguna Niguel, Calif on Tuesday, and he did not disappoint.

At GM, "green" equals all things Volt, and that is good for news-hungry starved Chevrolet plug-in enthusiasts.

During the conference, Mr. Akerson would hint at big things coming for the Chevrolet Volt, but first took a moment to reflect on what has transpired to date, especially in relation to the current "green halo" champion from Toyota...which the CEO refuses to name out loud.

"I'm not going to give them a free plug.  Anyway, for the first two years we outsold them, first year, second year, and this year.  We sell a couple of thousand a month in the U.S.  We're exporting them to China.  We're exporting them to Europe.  But, this is a car that from a physics, from a thermodynamics point of view, from an engineering point of view, is probably the most complicated car.  But, it's been incredibly well received.  To give you an idea, in a consumer report two years running in a row, you know they ask for your rank at 5 for great, 4 for good, three average, down the line.  They've never had a car; they've never had a product that's ranked 92 percent either a four or a five.  No threes, and all these tens of thousands of customers, no twos, no ones."

After which, Akerson talked about the future of extended range Chevrolet, and drastically cutting the price while still making a profit, which the CEO says the Volt has yet to do.

"...in this next generation we think we can decrease the price on the order of $7,000 to $10,000, without decontenting.  That's very important to us.  And at that point in time I think you'll see the second generation be much more, hopefully, profitable.  I think it will be profitable."

The CEO also noted that Volts have "150 million miles driven on (them) electricity now in the U.S.  We've sold about 26-1/2 thousand of them.  There's nobody else who has done as many plug-in electric miles as we have.  And the car is safe.  It's a five-star rated safety car."

It is worth noting that Mr. Akerson really undersold the Volt's credentials by quoting sales at "26,500." In actual fact, GM has sold 35,702 Chevrolet Volts in the US; and we can't help but feel a little uneasy about his pricing prediction after that guffaw.

The next most obvious question to be asked after hearing about a massive price drop is, "when will the 2nd generation be arriving for the Volt?"

And while we have no answer straight from GM on that yet (they would probably like to sell as many Gen 1 cars as the can before then), with the new Chevy Cruze platform (DX22) going into service next year for the 2015 model year, we think a safe bet would be a 2016 MY on a 2nd gen Volt.

The GM CEO had a lot more stuff to say about "green" cars, the Volt and the upcoming Cadillac ELR at the conference.   Thankfully, the fellas at Fortune had the good idea to make a transcript of the whole conversation and host it online.  If interested, you can check it out here.    (hat tip to Josh B on the transcript link)