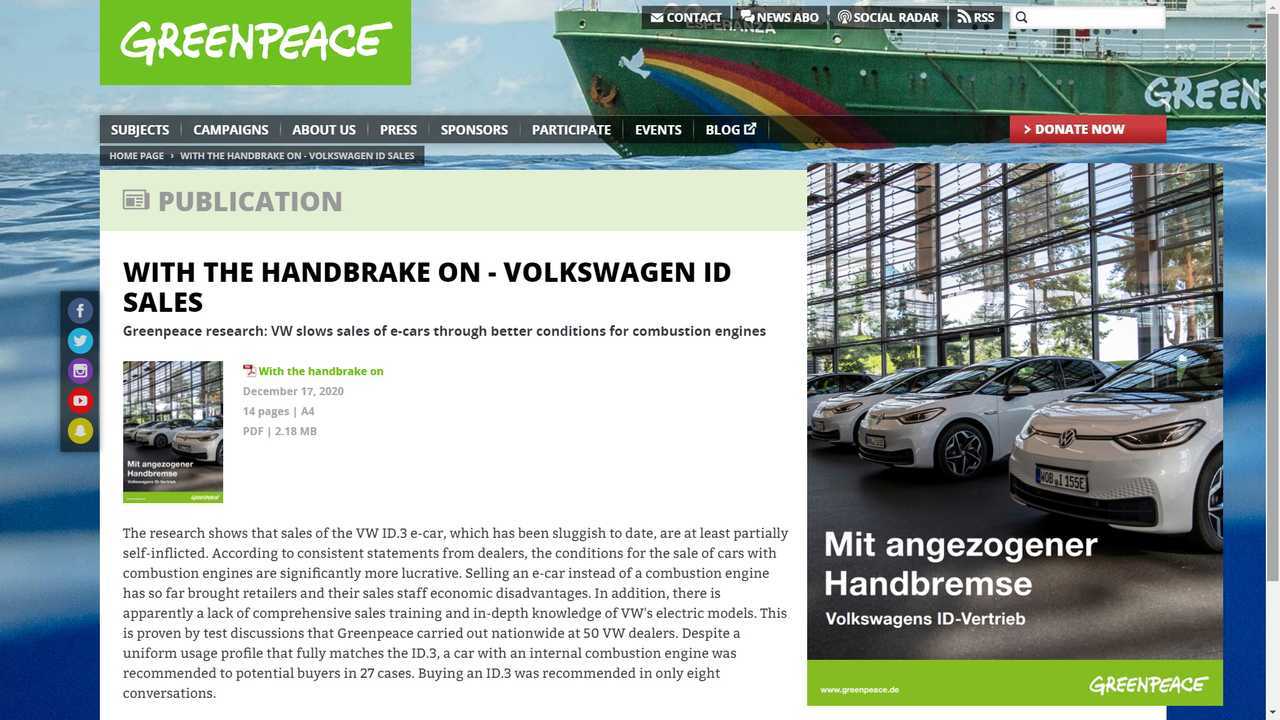 It does not have to do with what Volkswagen wants: it is about what it can currently do.

One of the main advantages of an electric car is that it does not require constant maintenance. If it does, there’s something wrong with it. That means dealerships have to find another way to earn money. Killing the combustion engine is not just that: it implies fundamentally changing the car business as a whole. This is what Greenpeace seems to have missed when it declared Volkswagen is doing little to sell EVs.

In a study called “With The Parking Brake On - Volkswagen ID Sales,” Greenpeace said that it evaluated 50 dealerships with fake buyers played by volunteers of the organization. In 27 situations, they were advised to buy a combustion-engined car instead of an ID.3, even if they presented a profile that would fit the ID.3 perfectly, according to the NGO.

These conditions were a maximum of 30,000 km per year of mileage, mostly urban use of no more than 200 km, occasional travels to nearby cities on the weekends also up to 200 km, one or two trips per year of up to 1,000 km, private parking spaces with the possibility to install a charger, and a budget of €35,000.

Greenpeace concluded that dealerships have no incentives for selling electric cars. Some of the dealers told the volunteers that selling an ICE vehicle is more profitable – something obvious, as we said at the beginning of this text. EVs do not need oil changes, spark plugs, new cables, and hoses. Even the brakes are spared due to regenerative braking.

The volunteers had a set of five questions to measure how well trained sales teams were about electric mobility. One of the questions was how many chargers Germany has. That’s around 30,000, and only five clerks got that right, but who asks how many fuel pumps are there in any given country?

The volunteers also asked how much range a car could have after charging for 12 hours in a regular power outlet (about 100 km, with half of the answers correct), if millions of EVs wouldn’t overload the power grid, what was being climate neutral, and if EVs burned more fuel than cars with a combustion engine.

With those results, Greenpeace now demands that Volkswagen makes dealerships want to sell EVs as they sell ICE cars. It also urges that they are not penalized for doing so. As far as we know, there’s no penalty for selling EVs. What happens is that some do not want to sell them because they are bad for the business dealerships are used to.

Ironically, it was Volkswagen who got penalized for selling fewer EVs than it should: it will have to pay up to €275 million in fines due to CO2 emissions. That is the end of a story that started after Volkswagen decided to sell a half-baked ID.3, with software issues, to avoid precisely that. And it didn’t work.

That said, it makes no sense that Volkswagen would not be willing to sell EVs. It has invested billions developing the MEB platform and converting factories to produce models based on it. Not even Wolfsburg will escape making electric cars. No company invests that much money to make a compliance car. The e-Golf already played that role well.

Above all, Volkswagen even created an agency model for its sale points. It is a hybrid strategy between direct sales and the classic model of doing everything in dealerships, as we explained on August 21. As GM's case with Cadillac shows, it may not be enough to please them.

More Articles On Dealerships And EVs:

With such a sales model, dealerships stop spending to keep the cars in a parking lot. They also do not have to offer discounts on cars nobody wants to get rid of them. What dealerships become is solely a place for the car presentation and finally for its delivery.

All vehicles sold – regardless of on the internet or the dealership – will give dealers a cut. They may eventually make more money selling accessories or doing the sort of maintenance EVs may still demand regularly, such as tire rotation and replacement, alignment, wheel balancing...

On the customer side, car prices will be the same either on the internet or at the dealer, and they will be ordered as the customer wants, not as a bargain that is ugly as hell but is readily available on the back of a dealership lot.

Again, selling electric cars is not just about replacing some components in them. It is about transforming a massive and traditional business model completely. Greenpeace should be more concerned about the impact mining may have to produce all these electric cars or if the idea of using natural resources to build more cars is sustainable. If anyone is willing to sell as many EVs as possible, that’s Volkswagen – whether this is environmentally responsible or not.