From the royal wedding Jaguar E-type to the DIY kits for VW Beetles and Morris Minors, these are the classic EV specialists leading the charge A new spark of life in classic EVs Electric-powered vehicles, EVs, are steadily gaining in popularity, and not just in the new car world. Several companies are producing conversions for classic cars, swapping the original engine for an AC motor and st...

From the royal wedding Jaguar E-type to the DIY kits for VW Beetles and Morris Minors, these are the classic EV specialists leading the charge

A new spark of life in classic EVs

Electric-powered vehicles, EVs, are steadily gaining in popularity, and not just in the new car world. Several companies are producing conversions for classic cars, swapping the original engine for an AC motor and state-of-the-art batteries.

The result is an uncanny mix of classic styling and futuristic silent running, with huge and instant torque – and of course zero emissions from the vehicle itself. By far the most famous of these has been Jaguar’s E-type Zero, which found fame in the royal wedding of Prince Harry and Meghan, but most conversions have been based on more utilitarian models, especially aircooled VWs.

This is as much about the less reverential attitude of VW owners and the numbers of cars available for conversion as the practical considerations of easy engine bay access – but there are plenty of other one-off conversions around, from MGBs to Ferraris.

Most suppliers offer options for electric heater or aircon, electric brake servo and power steering where necessary and LED lights to reduce the drain on the batteries. All but the most expensive conversions link the electric motor to the original gearbox, so a bit of gearchanging is still necessary – though the high torque of an EV means far fewer changes are needed, especially around town. There's an argument that actually a bit of cog-swapping makes for a more 'classic' experience anyway.

So, here are eight of our favourites so far. 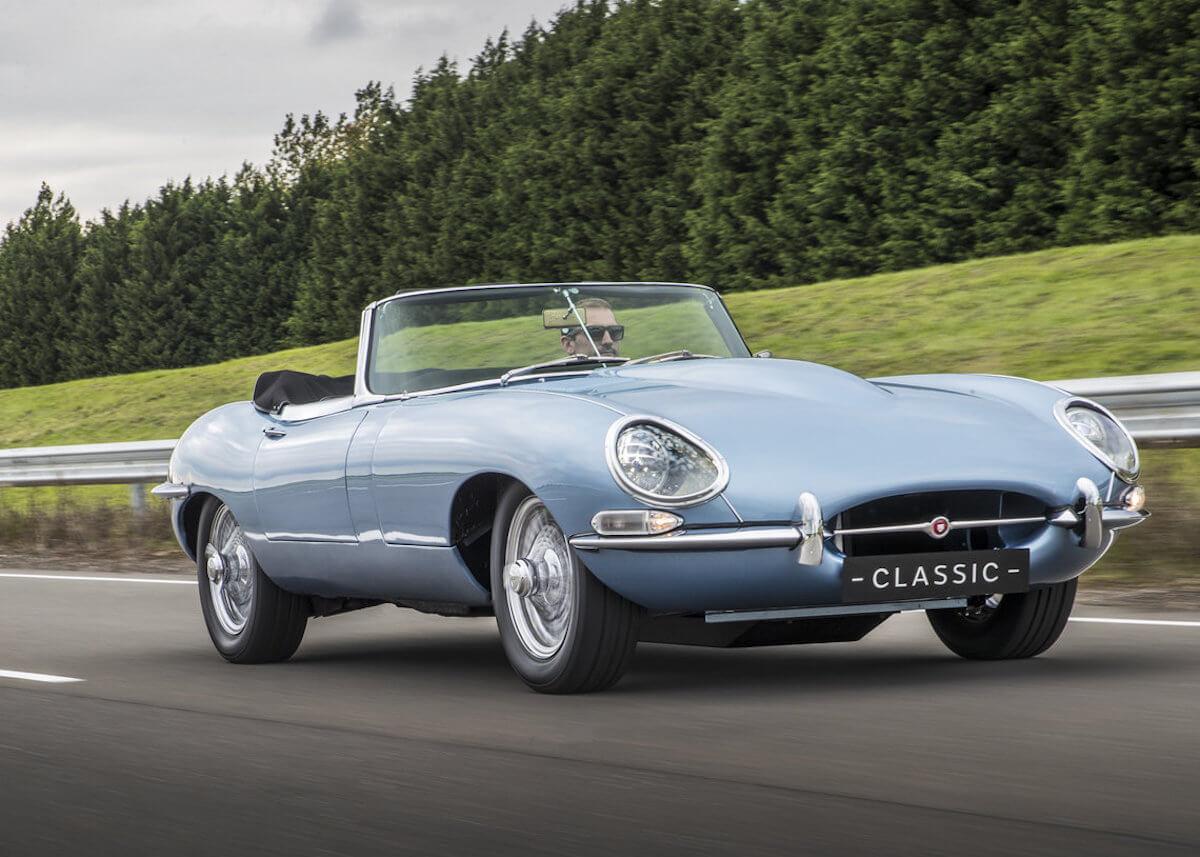 Jaguar Classic first showed off the E-type Zero concept at the Jaguar Land Rover Techfest in September 2017, promising to put it into low-volume production if it achieved significant customer interest. The concept then famously reappeared in May 2018, as the car that Prince Harry and Meghan drove away from their wedding reception – and soon after it was announced that the EV E-type would indeed be made available for sale.

The conversion sites the electric motor in place of the E-type’s transmission, while the battery pack has been shaped to occupy the same space as the original six-cylinder XK engine – meaning that the conversion could actually be applied to any XK-engined Jaguar, Daimler or even kit car. Think XK120-150, S-type, Mk2, XJ6 or even C- and D-type replicas, to name but a few.

The conversions retain the original differential, and there’s no need to uprate suspension and brakes because the EV version is 100kg lighter than the original, but with near-identical weight distribution. Performance is improved, with a claimed 0-60mph in 5.5 seconds, and 0-100mph in 10 seconds compared with 6.7 and 16 seconds respectively for a conventional Series 1. In theory the 150mph top speed would also be achievable but Jaguar Classic has limited the top speed to 100mph.

A turnkey EV E-type based on one of Jaguar Classic’s full restorations will start at £300,000 but customer cars can be converted at Jaguar Classic Works for around £60,000. More information here. 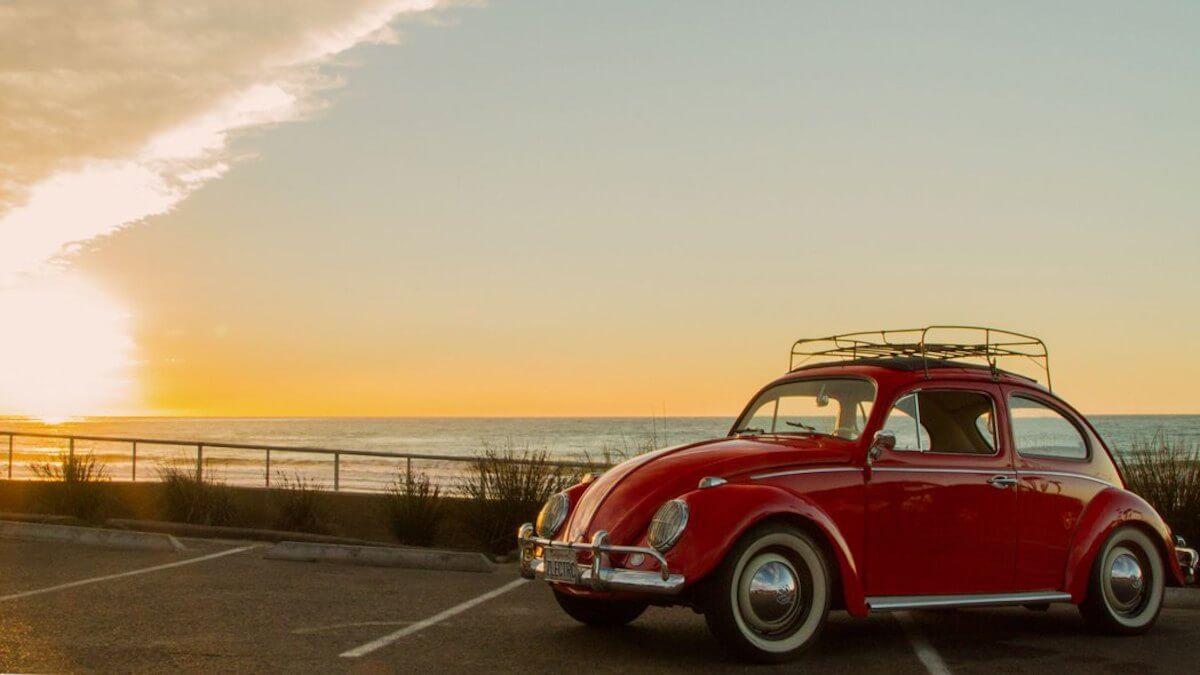 In many ways, Zelectric has been the best ambassador of electric conversions. Company founders David Benardo and Bonnie Rodgers weren’t necessarily the first but they’ve been the most prolific, and inspirational.

As lifelong fans of aircooled VWs it’s no surprise that they specialise in conversions to the Beetle, Type 2 bus, Karmann Ghia, Thing/Trekker, even beach buggies – as well as early Porsches, such as the 356, 911, 912 and 914, and the Fiat 500.

The pair started to ponder the idea of EV classics in 2006 and finally launched in 2012 with the Zelectric Bug. Their conversions retain the stock transmissions, which keeps the price down. Customers can take their cars to Zelectric, with conversions starting at $56,000, or the company will source a donor vehicle and convert it to a turn-key EV from $75,000.

There’s no cutting or welding involved so the conversions are reversible, though Zelectric doesn’t know of anyone who has gone back to the old engine. The high-tech replacement consists of a maintenance-free AC motor that Zelectric say is designed to run ’24/7 for 100 years’ and lithium-iron batteries that should provide the full range (80 miles between charges) for at least 160,000 miles. 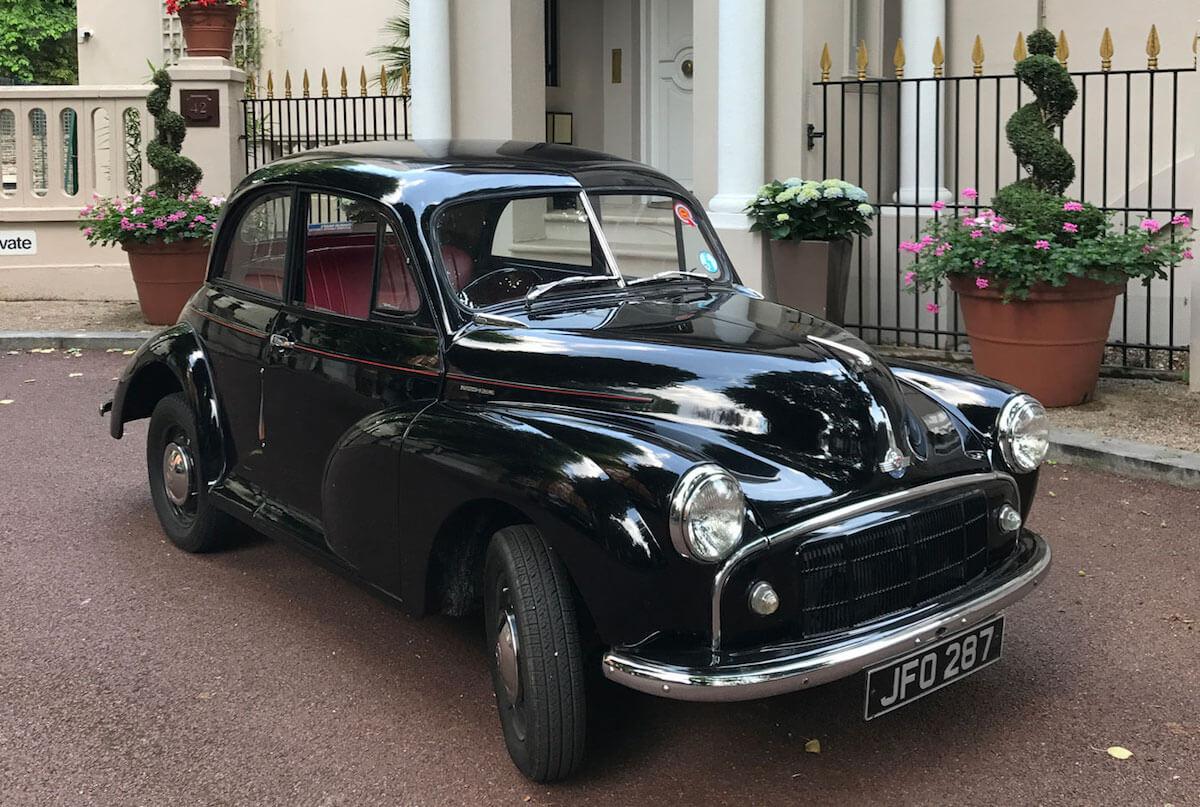 Matthew Quitter of London Electric Cars has gone an altogether more British route to electrification than the rest of the companies here. He’s started with Morris Minor EV conversions, and moved onto Series Land Rovers.

The Morris Minor uses lithium batteries mounted in the engine bay and in the boot, with the single 30hp AC electric motor driving through the original four-speed clutch and gearbox. Everything has been designed to keep the conversion as easy and affordable as possible, right down to using secondhand battery cells.

The conversions bolts into place in just a weekend’s work for a competent DIYer, or Matthew will carry out the conversion at his London workshop. It transforms the Minor, endowing it with a mighty 100lb ft of torque and replacing the raucousness of the original A-series (or earlier sidevalve) with the smooth, eerily quiet electric motor.

It costs £10,000, which is one of the cheapest around. The downside is that range is only around 40 miles – but the Minor is aimed at the city market, and it’s perfect for that. We can’t wait to see the Land Rover! Read more here. 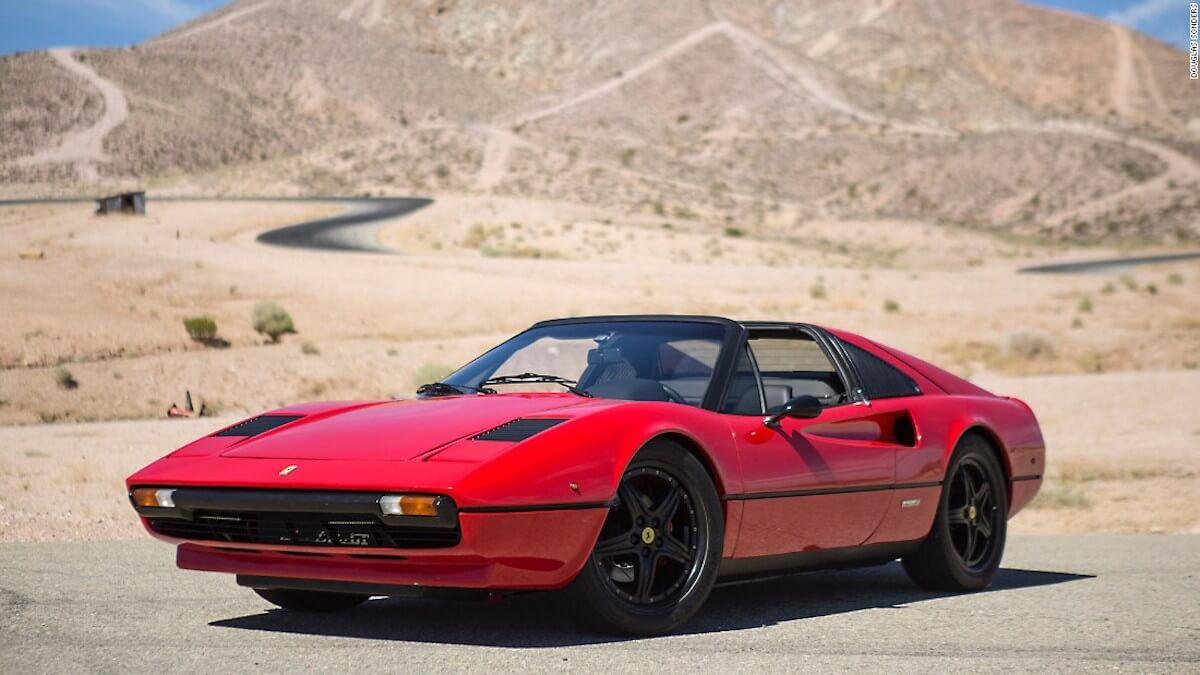 Like Zelectric, Electric GT are based in San Diego, but their approach is slightly different, taking a more custom approach to the conversions rather than specialising in particular models.

And so the company’s conversions to date include Fiat 124, Toyota Land Cruiser FJ40, Jeep FC 150 and, err, a Ferrari 308 GTB. The Ferrari came about when the company was searching for a suitable donor to build into a publicity vehicle for the EV conversions. When a burnt-out 308 appeared in a San Diego scrapyard, a plan was hatched!

The Ferrari’s engine and transmission was beyond repair, so it was swapped for a Porsche G50 transmission and three AC induction motors, along with a lithium battery pack. The result is the ‘328 GTE’, which weighs 3350lb, 150lb more than the original car, but develops 330hp and 330lb ft. It achieves 0-60mph in 4.8 seconds instead of 7.7 seconds and is said to be capable of 180mph rather than the original’s 156mph.

As a publicity tool, the Ferrari certainly worked, because it was put up against a standard car by the Stig on Top Gear USA – and the EV was ten seconds a lap quicker.

The success with the Ferrari has led to other projects. These include the Fiat 124, which uses twin AC motors to generate twice the torque (200lb ft) of a standard car, near-halving the 0-60mph time to 6.5 seconds. 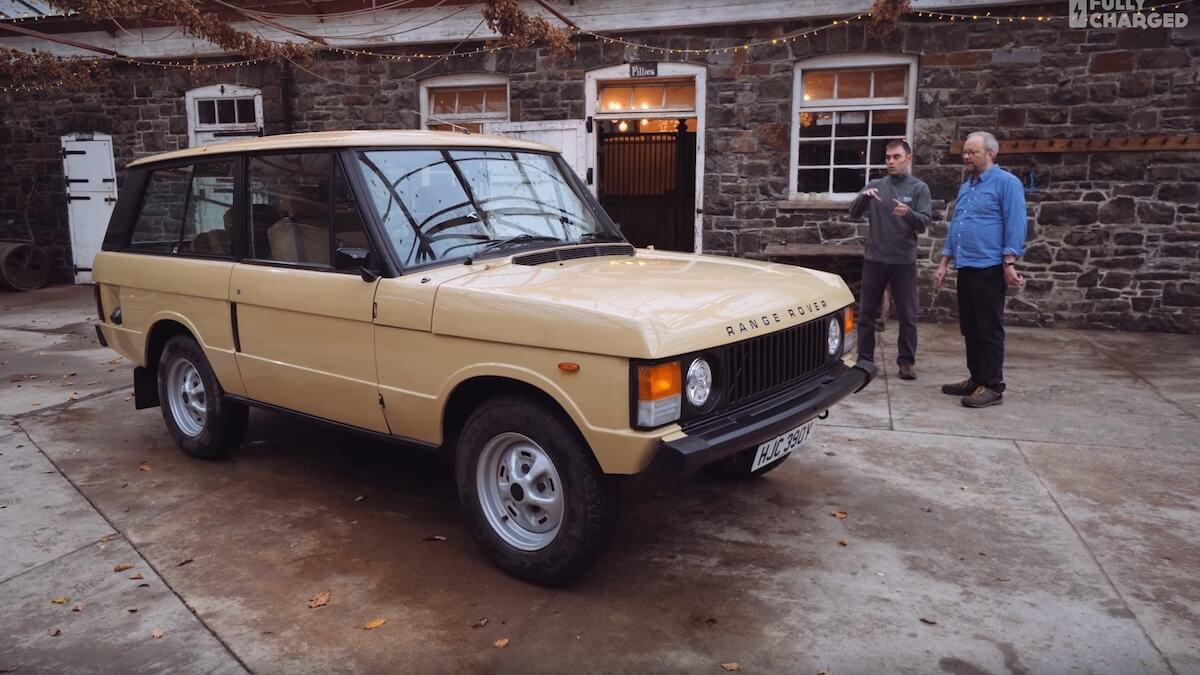 This UK-based company is interesting in that it will not only sell full conversion kits for a variety of classic cars, but it also sells the component parts for DIY conversions, such as the motors (from 45hp to 650hp), the controllers, the batteries and the battery boxes.

Proprietor Richard has also developed several bolt-in conversion kits for classics including – of course – the VW Beetle and camper. The kits include everything needed, from the electric motors and batteries to the grommets and crimps, as well as the adapter plate, motor mount, coupler and battery boxes.

Conversions by Electric Classic Cars, using customer-supplied vehicles, can start at £12,000 for small cars with sub-100 mile ranges, whereas a Range Rover-type conversion will be closer to £50,000. There’s more here. 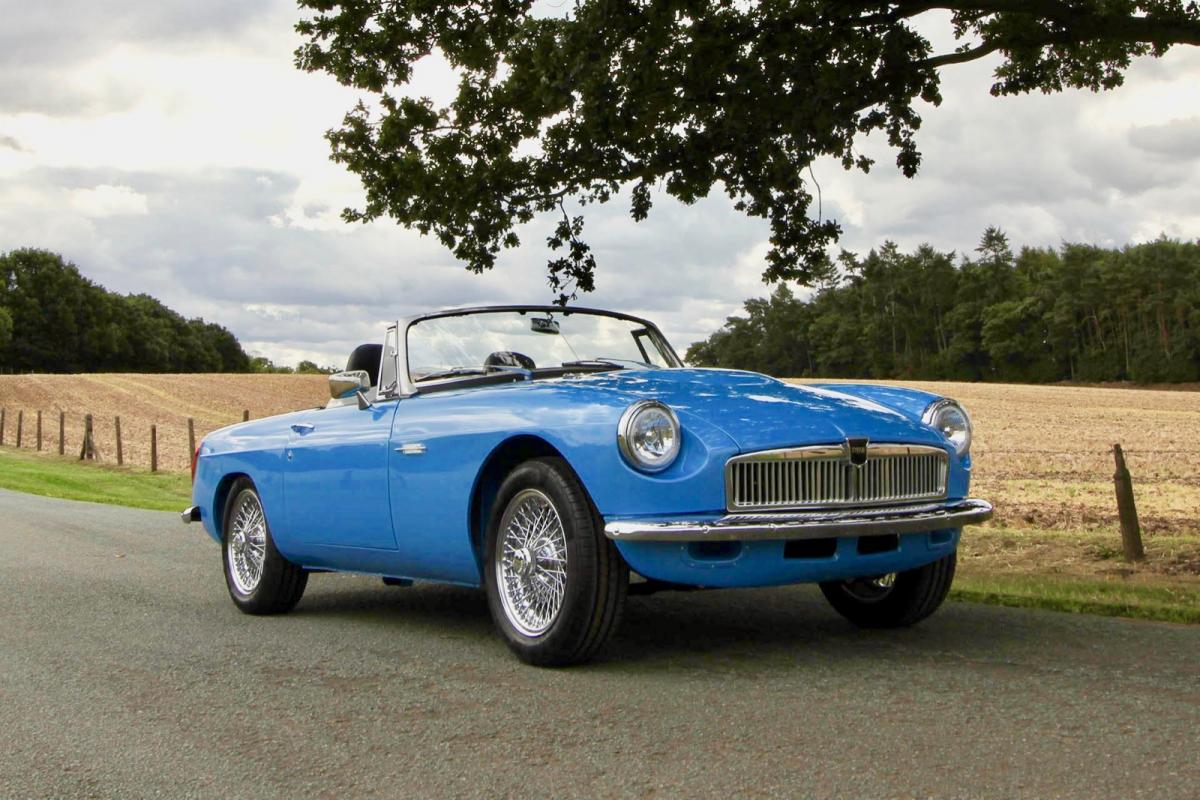 This relatively new UK specialist has come in with a strong offering, promising to build 18 MGB Roadsters and four Jaguar XKSS replicas in 2019, both left- and right-hand drive. There's also talk of a Jaguar C-type, D-type and XK120 replica EVs coming soon.

The MGBs will be built on new British Motor Heritage bodyshells, while the Jaguars will use replica shells built by Gregson Polska. The MGBs will be priced at £99,600, with a deposit of £8300 (initially held in an escrow account). Pricing for the C-type is expected to be around £150,000, and for the XKSS around £180,000. 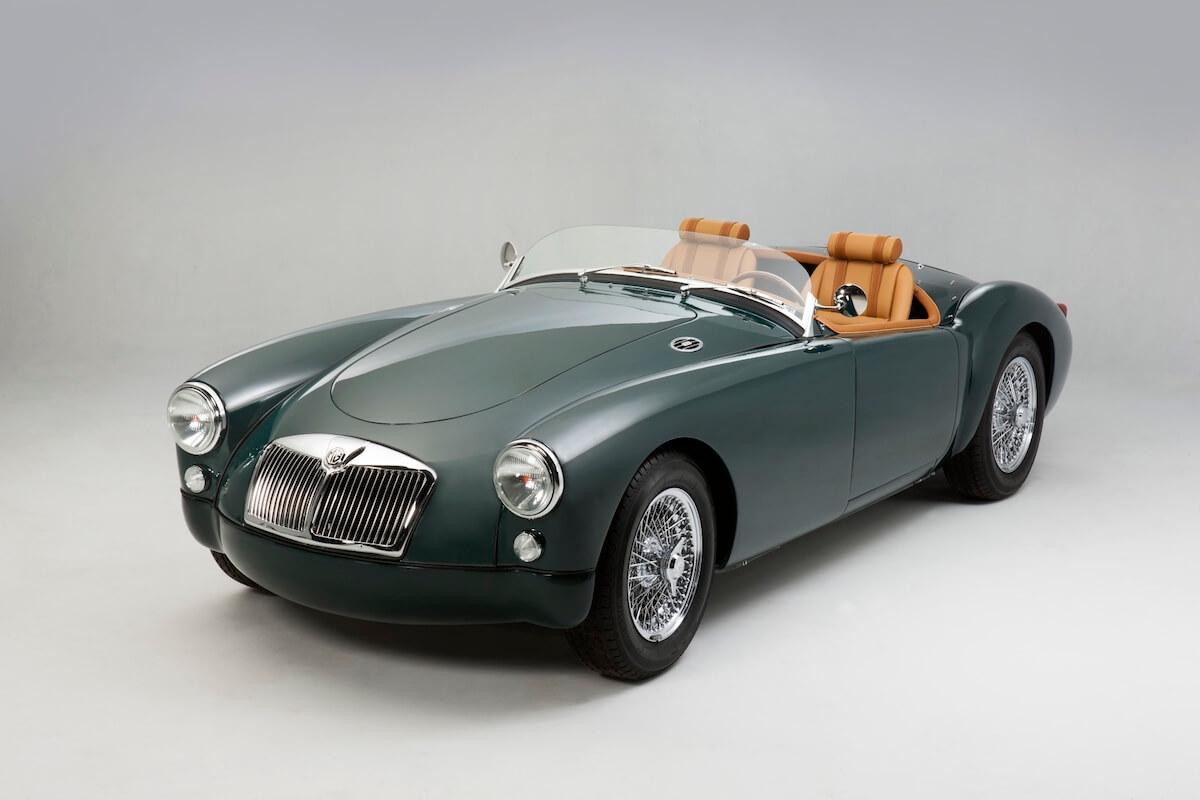 From its HQ in Helsinki, Finland, E-Drive is starting on a run of up to 50 electric-powered MGA conversions. Each one is built to customer specifications, whether convertible, coupé, left-hand drive or right-hand drive.

The conversion uses a 90kW single motor, delivering 240lb ft of torque. Like Jaguar Classic's E-type Zero, it does away with the original gearbox, replacing it with a direct drive system. The range is reckoned to be 60-90 miles.

E-Drive has also exhibited an EV Triumph GT6, and will also consider with classics for conversion. Founder Michael M Richardson has tapped into a team of electronics and software specialists to form his team, with the result that on top of the EV technology, the MGAs will also come with dedicated GPS, GSM, Wi-Fi and Bluetooth for remote diagnostics, software upgrades and security.

Conversion time is currently estimated at nine months per car. Price in on application, and there's more information here. 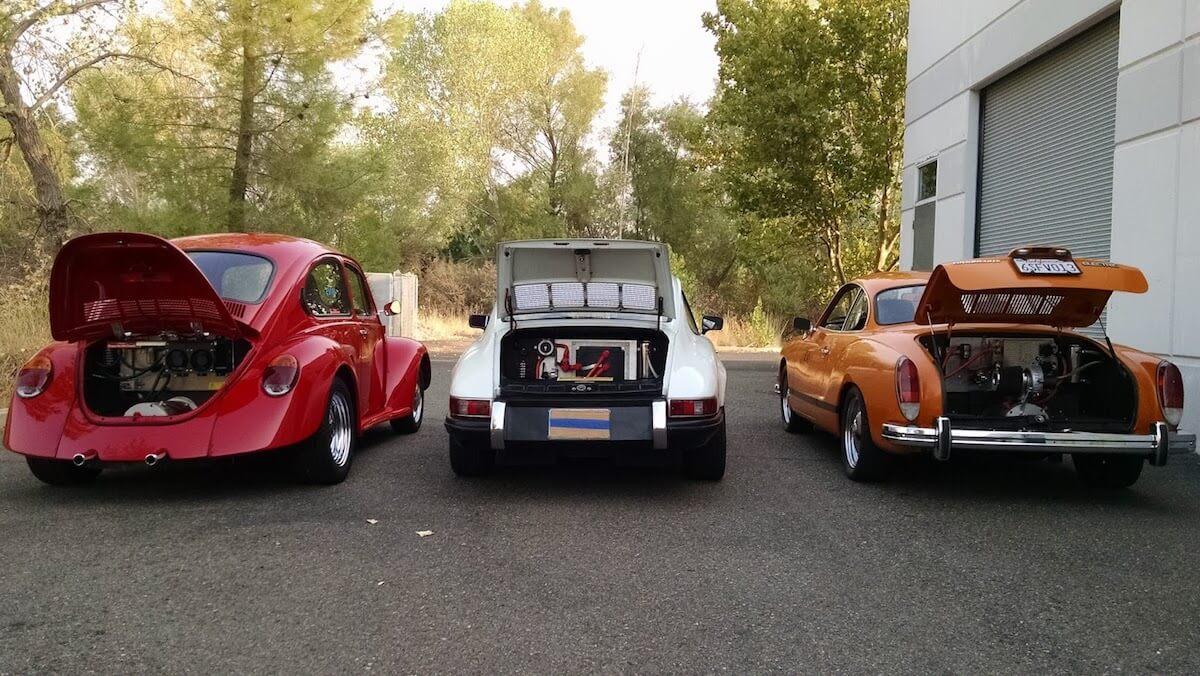 EV4U, based in Shasta Lake, California, do things a little differently. They're not only offering classic EV conversions, and component parts, but also running courses to teach DIYers how to convert their cars.

Most of their conversions are aircooled VW-based, with Beetle and Karmann Ghia conversions starting at around $22,000, and Porsche 912 and 914s at around $26,000. There's also an interesting Type 25 crew cab with battery packs under the pick-up bed.

The company has converted plenty of other makes and models too though, including Mazda MX5/Miata, Mercedes SL, Triumph TR6 and Datsun Z – as well as boats and ATVs.

EV4U also has a series of free online tuition videos, eight of them currently, that cover which vehicle to choose, whether or not to use a conventional clutch, how to calculate the size of motor and how many batteries to use, and the actual mechanics of fitting the conversions.

This is the company for the EV geek – and we mean that in the most positive way! Visit the EV4U website here and you'll see what we mean.