We already tested the 1st Edition; now we find out just how far the ID.4 Pro will go.

It's the Volkswagen ID.4 Pro's turn for the InsideEVs 70-mph highway range test. Kyle and Jordan actually ran 70-mph range tests on the ID.4 Pro and a Mustang Mach-E California Route 1 Edition simultaneously and we posted the results of the Mach-E's test a few days ago.

We've already done our 70-mph range test on an ID.4, but that was a 1st Edition which has a combined EPA range rating of 250 (402 km) miles per charge. The ID.4 Pro S (Statement) also has an EPA range rating of 250 miles, but the base model, the ID.4 Pro is a little lighter and has a more efficient tire/wheel package, and is rated at 260 miles (418 km). Therefore, we wanted to test out the longest-range ID.4 and see if it really goes further than the 1st Edition.

On our 1st Edition test which I performed, we finished up with 230 miles (370 km) driven, but the state of charge was still at 2% and the vehicle showed an estimated 4 remaining miles of range. During these range tests, it's very hard to time the distance to the DC fast charge station perfectly with when the state of charge reaches zero. On that test, I arrived with 2% state of charge remaining. We've gotten pretty good at getting it nearly perfect, but on that range test, I still had a little left in the battery. Unfortunately, there wasn't enough to drive to the next exit 5 miles away and turn around, so I had to end it at 2% SOC. 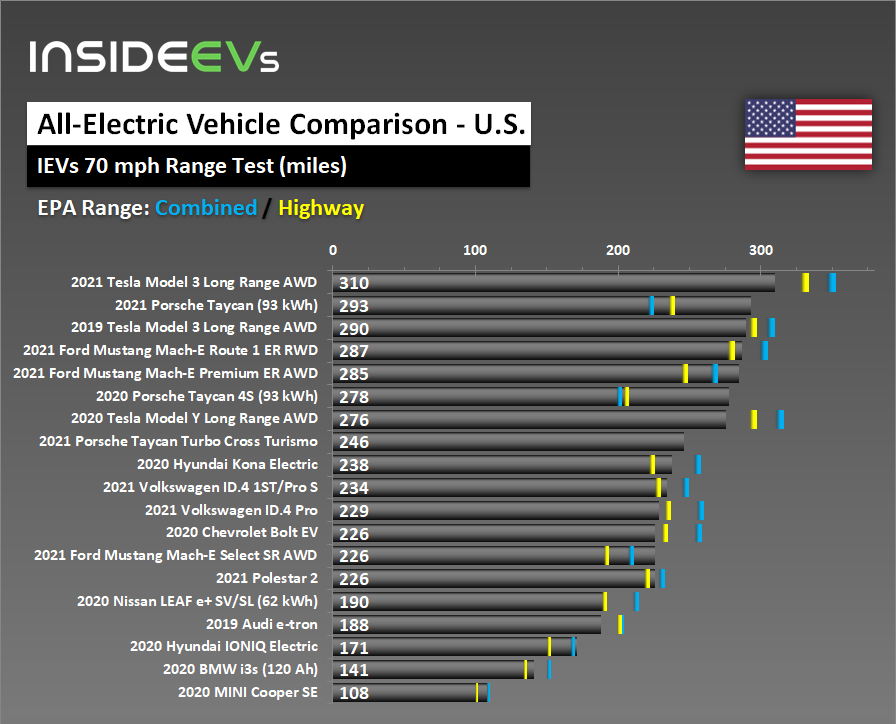 So in this test, the ID.4 Pro fell 3.4% short of its highway EPA range rating, and that's unusual. In fact, most non-Tesla EVs that we've tested exceed their EPA highway range in our 70-mph range tests, as you can see from the above chart.

One thing I found particularly interesting is how similar the results of the two tests were in the first half of the range tests. Jordan reported the distance he traveled at the 75% SOC (61 miles) & 50% (116 miles) SOC points and they were exactly the same results that I had when I did the ID.4 1st Edition test.

Jordan didn't report the miles driven when he was at 25% SOC or the remaining miles when he was at 75% or 25%, but this was his first solo 70-mph range test and Kyle likely didn't specify to him that it's a good idea to do so. But as you can see, the numbers that he did report are very similar.

One possible explanation for the slightly disappointing results was the weather conditions. It was relatively hot, about 90° F (32° C), plus Jordan reported 40-mile per hour headwinds near the end of the trip. It wouldn't take driving in those winds too long to drain an extra kWh or two at 70-mph and that's all it takes to shave 5-6 miles off the range. Additionally, if I recall correctly, the ID.4 1st Edition that I tested was brand new, so the battery wouldn't have had any noticeable degradation.

I'm not sure how old the ID.4 Pro that Jordan drove or how many miles it had on it. Some of the cars in the press pools can get a lot of abuse in a short period of time.

That makes sense because up to the halfway point, our statistics were nearly identical. The second half of the drive is where Jordan's range slipped a little behind mine. In both tests, we finished up with an efficiency of 3.0 miles per kWh. The math works out because the ID.4 has an 82 kWh battery, and 77 kWh is usable. If you multiply 77 x 3.0 you get 231, and that's just about exactly what we both finished up with.

About our highway range tests:

We always like to mention that these range tests aren't perfect. There are variables out of our control, like wind, traffic, topography, and weather. However, we do our best to control what we can.

We do these 70-mph range tests to provide another data point for potential customers that are looking for as much information on the driving range of a particular EV as they can get.

So check out the video and let us know what you think. Do you think 229 miles for the ID.4 Pro at 70-mph is a good result? As always let us know your thoughts in the comment section below.