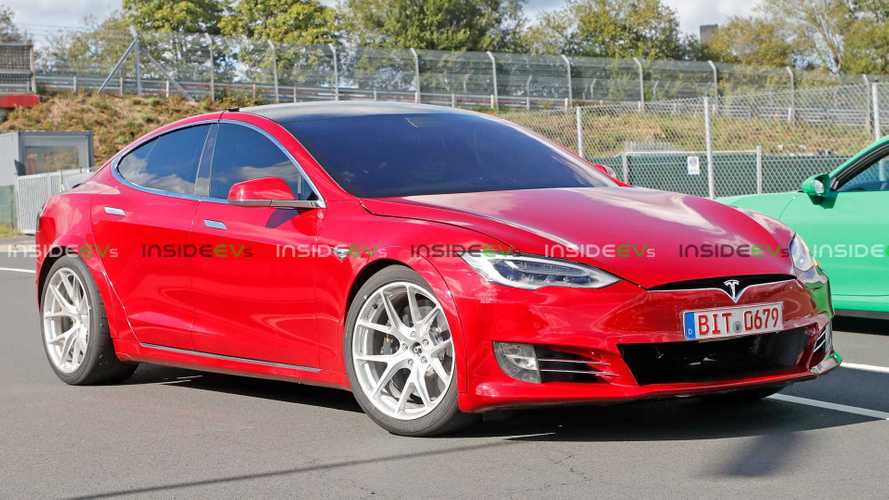 We don't know everything about the Model S Plaid powertrain, but we know enough to make some detailed observations.

Tesla hasn’t told us the specifications for the Tesla Model S Plaid. Essentially, all we know is that it will have three motors, much like the upcoming Tesla Roadster 2.0. There’s plenty of speculation in this article, but it’s always fun to speculate, and it's all we have at this point.

We’ve tried to make some educated speculation based on known facts. We’ve included loads of technical information on the evolution of Tesla’s thermal management system as well. As far as we know, no one has put a number on Tesla’s refrigeration capacity or on Tesla’s module heat transfer capabilities. It’s a good read just for that. Thanks to Keith Ritter, ME Systems Engineering, for the detailed heat transfer analysis used in this article.

We estimate that multiple improvements in Model S Plaid powertrain will result in a significant thermal management system (TMS) performance improvement: a bigger refrigeration system with more capacity to cool the cells and another bump in battery kWh’s to drop I2R heat rejection further, coupled with the Model 3's superior cooling tube design. We're also speculating an increase in battery size to 130 kWh and three Model 3 permanent magnet motors would increase HP to the low 800 range.

The Plaid will then have the edge over the Porsche Taycan in the endurance/battery cooling department primarily due to Taycan’s remaining weak spot, which is its ineffective flat plate cooling scheme in comparison to Tesla’s superior method of gluing the cooling tubes directly to the cells.

Here are the estimated specs compared for other EVs.

We break the powertrain into three parts:

The Model S P100D is approximately 762 combined horsepower. We are assuming Tesla will want a modest bump in power over the P100D. However, they can’t get too carried away in the power department or they will run into power limitations in the battery. Since this is a track car they need to be able to have the endurance to hold the increased power without overheating.

Therefore, we estimate low 800 HP range for the Tesla Plaid and an increase in battery size to 130 kWh from 100kWh in the P100D. This will result in a more comfortable C rate for continuous track use. Conveniently, that power is pretty close to three, Model 3 motors.

How could Tesla fit 130 kWh of cells in Model S Plaid?

First, just a change to the taller 2170 cells would increase kWh’s from 100 to 108. Second, Tesla’s new pack design in the Model 3, where the cells are glued right to the cooling tube allows tighter packaging than the old Model S design. Third, Tesla can double stack cells under the seats or even in the tunnel if they have to, thus 130 kWh doesn’t sound unattainable.

The figure below summarizes the power compared to existing EVs. This table includes the battery C rates so you can see the more comfortable C rate proposed for Plaid compared to P100D.

Before we discuss Tesla Model S Plaid, let’s take a look at how the cell/cooling tube design used in Tesla’s product line has evolved. Once you see the evolution you will understand why the old original Model S overheated on the track.

Primarily, Tesla did two things to improve heat transfer. First, they put fewer and fewer cells on each run of cooling tube. Secondly, in Model 3 they glued the cell directly to the cooling tube which drastically increased the heat transfer.

The old original design used in Model S is shown below.

In the old original design, each module only had one cooling tube - 444 cells were strung out on this one tube. You can see that the cells at the end of the tube would run hot.

Next, we show the improved design tesla used in Model S P100D.

Model 3 module design is shown below.

In the Model 3 they continued the trend of reducing the number of cells per tube. Each cooling tube in the Model 3 only has to cool 164 cells compared to 258 in P100D and 444 in the original Model S. In the Model 3, Tesla also started to glue the cell directly to the tube which provides a much better heat transfer coefficient.

As such, they increased the total amount of heat transfer from only 1000 watts/deg K in old Model S to 2000 watts/k in P100D and 4700 watts/k in Model 3. Nearly a five to one improvement over the old original design.

We have also included the Porsche Taycan cell cooling tube design. It is shown in the figure below.

Porsche’s flat plate cooling system is the weak link in their design. We figure that their total ability to transfer heat at only 1600 watts/k compared to 4700 for the Model 3.

Then how does Porsche make it work so well on the track? We suspect Porsche has a pretty big refrigeration system. As you will see in the following section, both the Tesla Model S and Model 3 temperatures are a huge factor. We also think the cell chemistry that Porsche is using may have a lower internal resistance than Tesla’s. Moreover, the Taycan has 100 kWh battery pack compared to only 70 kWh in the Model 3. That adds further to the internal resistance and thus Model 3 has less ability to charge at 250 kW than Taycan.

Therefore, the total cooling capacity in W/deg. K really goes up. We ran the calc with those parameters and found, if using 2170's, that the pack goes to 96S78p, with each module set up with 12 bandoliers instead of seven. The cell and bandolier count would be different with 18650's, but conceptually it would be the same and the improvement in the heat capacity would even better (as discussed in the next paragraph). This is because the cell/bandolier geometry would be the same with either cell type, we'd see a significant increase in total W/deg. K —  about 7900 W/ deg K. for Plaid using 2170s.

There is an outside chance that Tesla will stick with 18650’s for Plaid Model S. The 18650’s do have some advantages. First, it would allow Tesla to keep the same basic pack and body design since there’s no increase in cell height. The other advantage is that you can get better heat transfer with the 18650’s.

Why? As you increase the diameter of the cell from 18 to 21 mm the cell volume is increasing as the square of the radius while the surface area is only increasing at a linear rate. So, for a given amount of cooling tube area, you have more cell volume to cool with the 2170’s than with 18650’s. Keith and I disagree on this 18650 vs 2170 controversy. Personally, I think Tesla will do whatever they have to do to make the 2170’s fit. Let us know how you feel about that in the comment section.

The cell/cooling tube effectiveness is summarized for all of Tesla’s EVs and for the Porsche Taycan in the following figure. As you can see in the figure, Tesla has drastically improved the heat transfer capability as their design evolved. Model 3 is the best of all and can transfer heat at twice the rate of Porsche Taycan and 5 times the old original Model S design.

For this reason, we think Tesla will keep this same design philosophy in Model S Plaid . . . but the details of such a design we are extremely anxious to find out. Will Tesla change the whole body design in order to fit 2170’s in the car? Is it possible that they stick with 18650’s? The 18650s would provide better heat transfer.

Just like the cell cooling tube (module) designs, the refrigeration system has improved with time. The old original Model S appears to only have a 2-ton capacity to cool the cells. Model 3 appears to have 3 tons except at high ambients where the condenser appears to be limiting capacity to around 2 tons.

We don’t know for sure what Taycan refrigeration capacity is. We suspect it is around 3.5 tons — even at high ambient temperatures. We expect Model S Plaid will have a bigger refrigeration system than any Tesla Model so far: bigger compresser, bigger chiller and bigger condenser. We also note in the Model 3 that the condenser is tilted back at an angle and we expect Model S Plaid to do the same.

We calculated the Model 3 refrigeration capacity based on chiller and condenser size measured in George’s Model 3 and Model S.

Old original model S had a 2-ton chiller capacity. This was increased to 3 tons on the Model 3.

Model 3 condenser appears to have a 3-ton capacity up to 90F, but only 2 tons at 100F. This is consistent with observed cutbacks in charging power for the Model 3 at higher ambients.

Refrigeration system summary is shown below