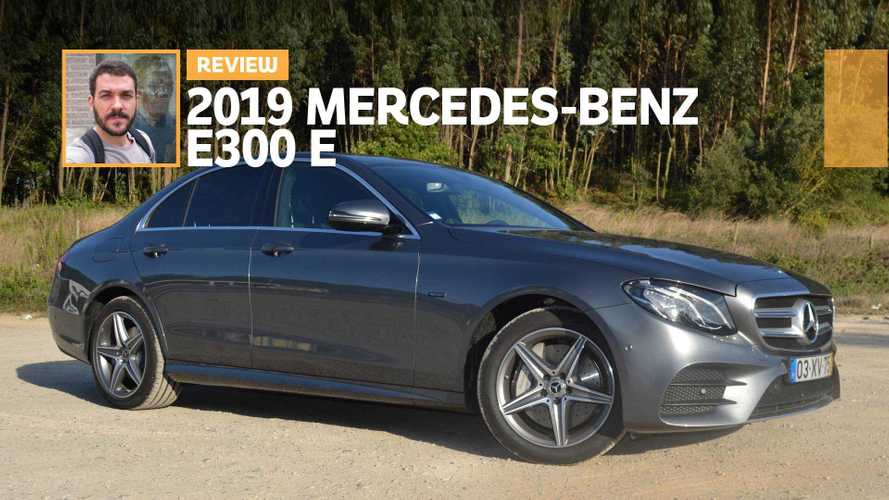 Daimler recently announced it would not develop combustion engines anymore. The company’s focus is to stick to electric motors, batteries, and make sure it can deliver the sort of personal mobility that the world now wants: a clean one.

We could say the Mercedes-Benz E300 e is one of the first steps the company has taken towards that goal. And it shows the E-Class had to adapt to get there.

The executive sedan is very proud of its size and luxury, but it is less luxurious in its home continent than it is in other markets, such as the U.S. or emerging markets. In these places, you cannot imagine a Mercedes-Benz without power front seats with driver-seat memory.

Yet, the E300 e we had the chance to drive had manual distance adjustment for the front seats. It was the very first thing we have noticed about this car as soon as we got behind its steering wheel. We can say we stayed there for quite a while.

The car was at the Mercedes-Benz headquarters in Portugal. More specifically in Sintra. We drove it to Vila Nova de Gaia, close to Porto, and back to Sintra in the four days in which it was under our supervision. Or the more than 700 km (435 miles) we run with it.

As usual, the car came with a full gas tank and fully charged batteries. The 13.5 kWh pack allows the big sedan to travel 50 km (30 mi) at speeds of up to 130 km/h (80 mph). And we had the intention to use it solely with electric power, but that was not possible.

First and foremost, because the author did not take the necessary precautions – such as granting access to public chargers. He lives in an old apartment, without any power sockets in the garage. So he had to make do with what he had.

That required putting the car to charge from its combustion engine on highways. It was the only way to make running in urban areas solely with electricity possible. Cities are where car pollution causes the most problems.

To make the E300 e an electric-only car – even if just for a few miles – you have to choose the Eco driving mode and also the Eco mode you want. That needs a more thorough explanation.

The E300 e can run on Eco, Comfort, Sport, Sport+, and Individual driving modes, from the most frugal to the most aggressive. There is a small selector on the central console, to the right of the infotainment controls, that allow you to choose among them. It is the one that is closer to the climate control. We kept the car on Eco most of the time.

First, because we do not doubt that the 315 hp (235 kW) the hybrid powertrain generates is more than enough to overtake in safety. Second, because no one willing to have a sporty sedan would buy an E300 e. The E 63 AMG was created precisely for these clients. The plug-in hybrid fulfills very different demands.

There are three other buttons right below the driving mode selector. After you choose Eco, the last one – with the symbol of a battery – grants you access to the four Eco modes: Hybrid, E-Mode, E-Save, and Charge.

The first one lets the car select the engine, motor, or combination of the two that makes more sense according to its programming. The E-Mode, as you must have already guessed, makes the car run solely on electricity.

E-Save spares the electric motor as much as possible, to save charge for when you really need it. Charge is self-explanatory. What we did was selecting this mode on the highway to ensure clean rides in Lisbon and Vila Nova de Gaia. It worked just fine, even if not in the way we planned.

The 2020 E-Class will present a facelift that tends to be subtle, considering the car is performing well as it currently is. Anyway, this is a relevant warning for anyone considering to buy a new one. You may either bargain for a lower price with your local dealer or wait for the future looks. After all, having a car that will get too old in a matter of months will have a cost that you can either discount on the purchase or avoid. Planed obsolescence matters...

When it first appeared, the current E-Class was so similar to the C-Class it inspired us to write an article about the resemblance. “Does the automotive 'family face' strategy make sense?” was published by Motor1 in 2017, and the discussion is still valid.

The E-Class has a classic style, but not much personality. It still looks like a big C-Class. Let’s hope the restyling changes that.

The E300 e is a perfect companion for long trips. The seats are comfortable and offer a thigh support adjustment that makes it even more comfortable on the highway. Driver and passengers have nothing to complain about this aspect. All commands are easily within reach, which must make the ergonomics team at Daimler feel pretty proud.

The decision to turn the E-Class into a plug-in hybrid made no difference to its generous roominess in the cabin. But it certainly affected its trunk space. Instead of the 540 liters (19.1 ft³) the regular version presents, it can hold only 400 l (14.1 ft³).

Were it conceived from the very beginning to be a PHEV, the E300 e would have prevented this issue. Especially for a car that is this big for European streets and roads. At 4.92 m (193.8 in), it should have more space for luggage.

The way the battery pack is installed – like a bump close to the second row of seats – also makes it difficult for the sedan to accommodate large bags. The E300 e may make you feel better about not burning too much fuel, but you’ll probably ask yourself if this E-Class will look good with roof racks.

The shift selector is on the steering wheel column, as in most recent Mercedes-Benz. You’ll also wonder why Mercedes-Benz did not choose to do as Land Rover did with the last Defender, making the E-Class a sedan for six people. With three of them in the first row.

Driving from Lisbon to Vila Nova de Gaia in mostly good roads did not demand us to push the E300 e to its limits. So much so that we chose the Eco mode most of the time. But there were situations in which we pressed the gas pedal a little harder, mostly because of the way Portuguese drivers behave on highways.

You’ll hardly find anyone lane-hogging here. The left lane is mostly free for overtakes. And people get back to the right as soon as they have passed you. Sometimes sooner than they should, almost pushing you to the side of the road.

When we had to overtake, that had to be done as fast as possible. The few slow drivers on the road are largely outnumbered by the ones that speed too much. It is no surprise Portugal is one of the most dangerous places to drive in Europe.

In such situations, the E300 e lacked a little more punch. That is something that more aggressive driving modes would solve, but checking its performance was not our primary goal with the car. The Mercedes’ output is more than enough for family use.

In the city, the electric motor makes sure this big saloon behaves as the smallest and most agile car you can imagine. It is just not a good idea to drive it like one on the narrow streets of most Portuguese cities.

Trust Waze or any other navigation app, and you’ll see yourself in two-way roads where only one car passes at a time. It may be challenging to get the picture, but there are traffic lights to tell you when it is your turn on each side of the path.

Be careful if you decide to go to a shopping mall or simply to park your E300 e in a more protected environment. Most of them in Portugal are too narrow for a car as big as the E-Class. In some of them, you’ll have to reverse it more than once to make sure you can pass, with the beeps and warning of the parking sensors going mad around you.

Mercedes-Benz has always taken excellent care of its vehicles’ safety levels. The W213, which you also know as the latest E-Class, is a five-star model at Euro NCAP tests and a Top Safety Pick+ according to IIHS.

You may have less luggage space to carry your family stuff on the trunk of the E300 e, but you can be sure they are in one of the safest vehicles for sale in its segment.

We had already heard huge compliments to Mercedes-Benz’s MBUX infotainment system, but this was the first opportunity for some face-to-face time with it. It is really very competent and easy to use.

What seems to be a gear selector on the central console is actually the pad through which you control all of the MBUX’s functions. Pairing your phone is intuitive. The big 10.25-in screen also accepts inputs, but why put greasy fingers in that beauty? There is really no need, but it is good to know you have that redundancy.

Under the front seat armrest, two USB plugs make sure you and your front passenger will not end up with a discharged smartphone in the middle of the highway. Or going to work.

Mercedes-Benz says the E300 e in Hybrid Mode can burn just 2 liters of gas per 100 km. That’s the equivalent to 117.6 mpg. Better than many econoboxes or even motorcycles can ever dream of achieving.

The E300 e is not for sale in the US. Probably because Mercedes-Benz knows it would compete directly with the Tesla Model S in case it was. In Portugal, it costs €67,498.72.

There is no way to determine the exact price it could have in the US, but we have made an estimation based on the only E-Class derivative that is sold both in the US and in Portugal: the E 63 AMG.

You can buy one of them at a Portuguese Mercedes-Benz dealership for €98,999,99. In the US, the German company charges $106,350 for it. If a hypothetical American E300 e kept the same price difference in dollars, it would cost around $72,500 if equipped exactly like the European. Something improbable, since Mercedes-Benz sells more loaded vehicles in the U.S.

The questions American customers would pose comparing the two cars are certainly what Mercedes-Benz decided to avoid. At least until it does not have a fully electric sedan to compete with the Model S.

In Europe, the E300 e is much cheaper than a Tesla Model S. It can also be more comfortable to live with for people that do not have a way to recharge it at home. If you live in the Old Continent and need an executive sedan, the E-Class adapted for electric mobility is undoubtedly an option to consider. Just be aware of the issues we have pointed out in this review. And wait for the next one!