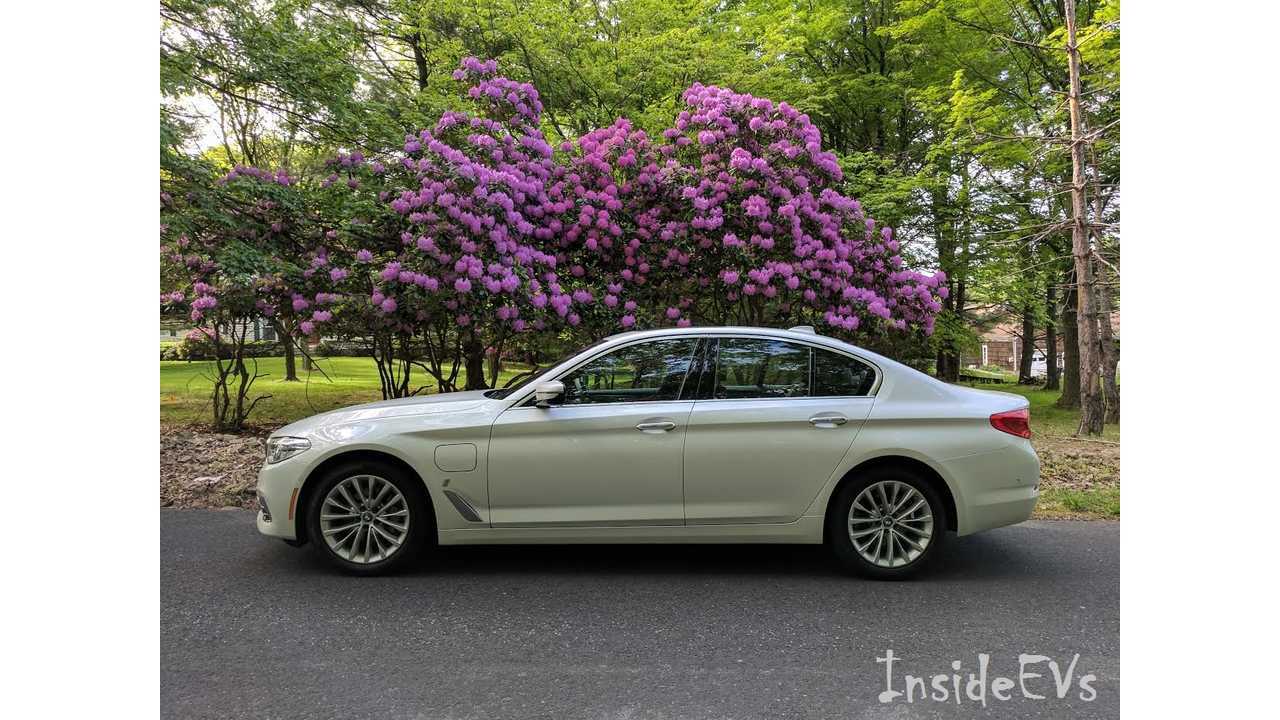 Plug in Hybrid options are beginning to cascade across the entire lineup of BMW’s core offerings. BMW designates these PHEVs as the iPerformance line with the marketing tag line; “Charging is optional, thrilling is not”. The X5-40e was the first to market in October 2015, then came the 330e in March of 2016, followed by the 740e nine months later. Now, it’s the 5 Series that’s getting the “e” treatment, with the introduction of the 530e iPerformance. 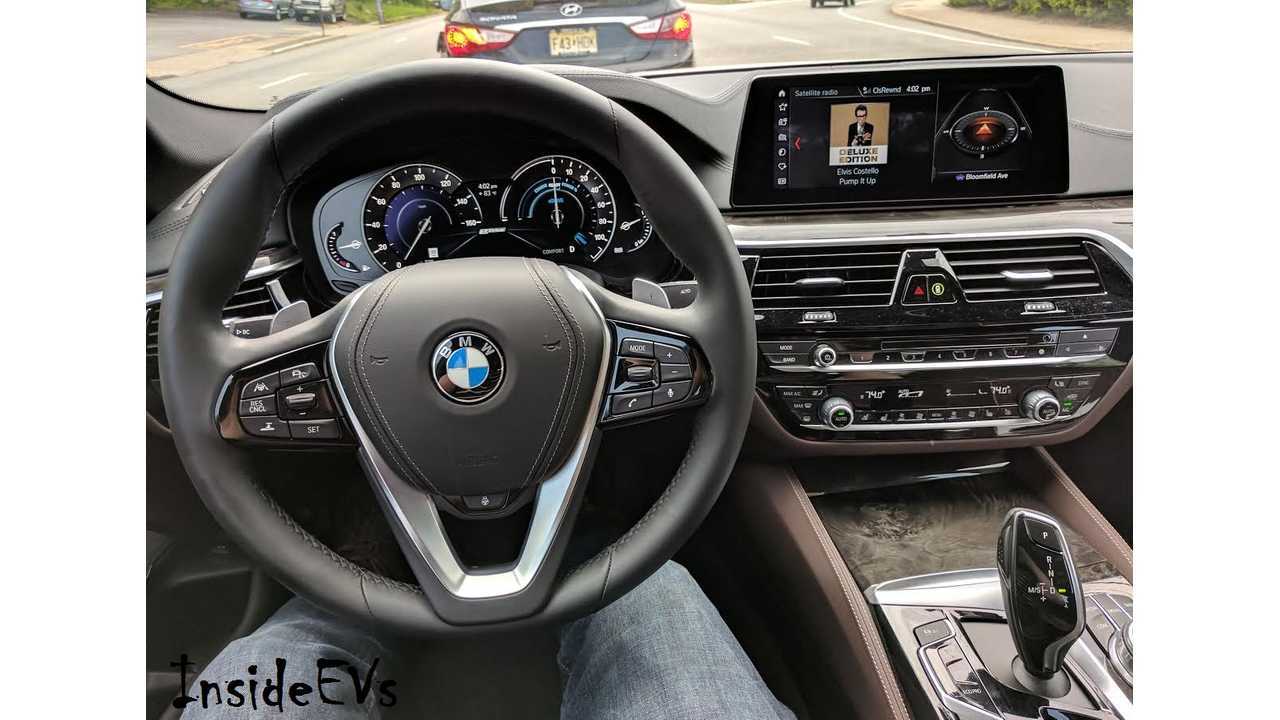 BMW of North America was kind enough to allow me an exclusive extended test drive of their latest iPerformance offering. Having it for nearly three weeks, I was able to get a good feel for how well the eDrive system works, how it performed, and what to expect in terms of fuel efficiency.

The 530e iPerformance comes with a turbocharged 2-liter inline 4-cylinder engine which, along with the synchronous electric motor combine for an output of 255hp and 310 lb-ft of torque. That’s enough power to propel the rear wheel drive 530e from 0-60mph in 6.1 seconds, and 5.8 seconds for the xDrive version (which I had), according to BMW. Top speed is 146 mph, and the maximum speed in all electric mode is 87 mph.

However, I noticed that the maximum speed in all electric mode diminishes as the state of charge depletes. So, while you start out with a top speed of 87 mph, it may be as low as 65 mph once the battery state of charge is under 10%. 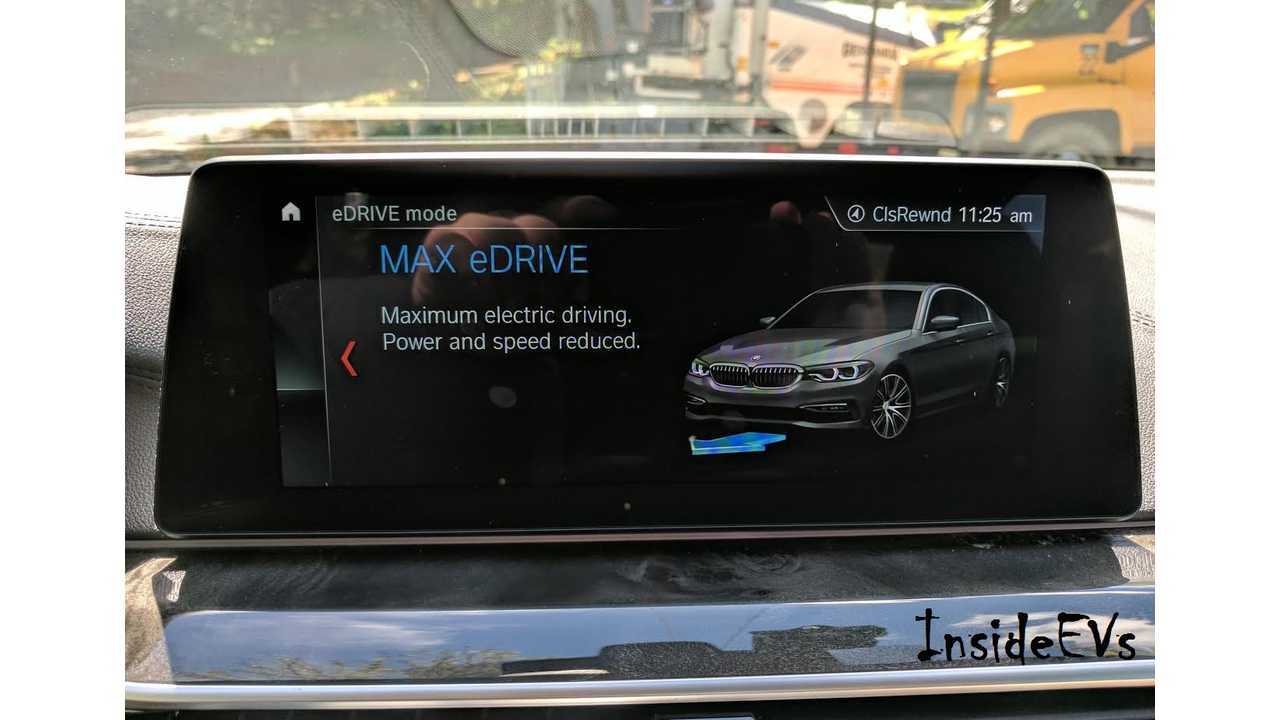 In MAX eDRIVE mode, the 530e will remain in all-electric mode up to 87 mph, until the battery is depleted. However, if the driver fully depresses the accelerator, the ICE will fire up to supply added power.

There are three driving modes: Max eDrive, Auto eDrive and Battery Control. The car defaults to the blended mode of Auto eDrive, which combines the gas and electric power supply to increase efficiency. In Auto eDrive the car decides when it’s best to be in all electric mode, and when to blend the power. It works very well, and I was pleased to see the car wants to drive in electric mode as much as possible, and only turns on the ICE when more power is needed or when the battery SOC is low. I found that this is probably the most efficient mode to use if you are driving long distances. If you’re going to be driving less than 40 miles, the Max eDrive mode would be the best choice. It keeps the car in all electric mode until the state of charge is depleted, and then the ICE kicks on. 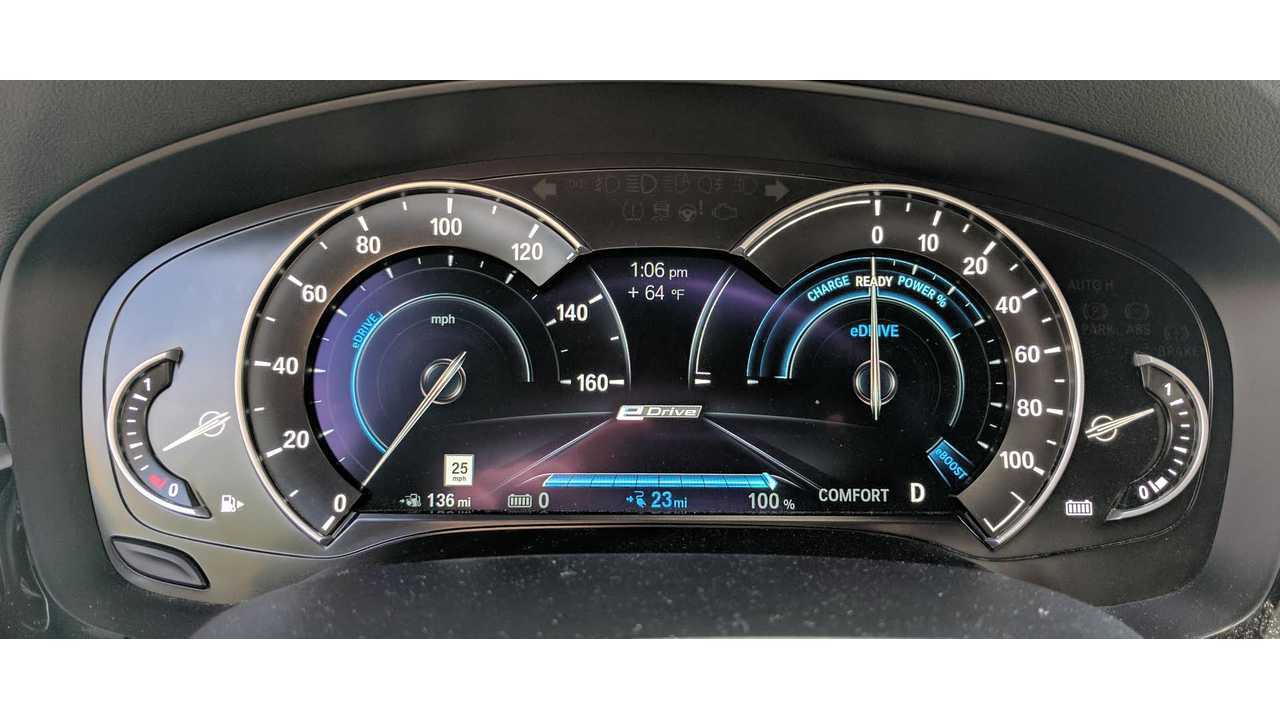 Although the 530e is only EPA rated for 15 miles in all electric mode, I managed to average 18 miles of electric range, and was able to squeeze as much as 23 miles from the 9.2kWh (total capacity) battery on of couple occasions.

The Battery Control mode is basically a “Hold State of Charge” mode, which allows the driver to set any level of battery charge and the car will only deplete the battery to that level, and hold it there in reserve for future use.

Available on the 530e are all the latest safety goodies that BMW has to offer; Blind Spot Detection System, Active Lane Keeping Assistant, 3D Surround View, Side Collision Avoidance systems and Heads Up display. I found the Lane Keeping Assistant to be particularly useful. It steers the vehicle back into your lane and vibrates the steering wheel if you wander a bit. The 3D Surround View was also helpful when parking.  The “birds-eye” view offers a useful perspective when parking in tight spaces. 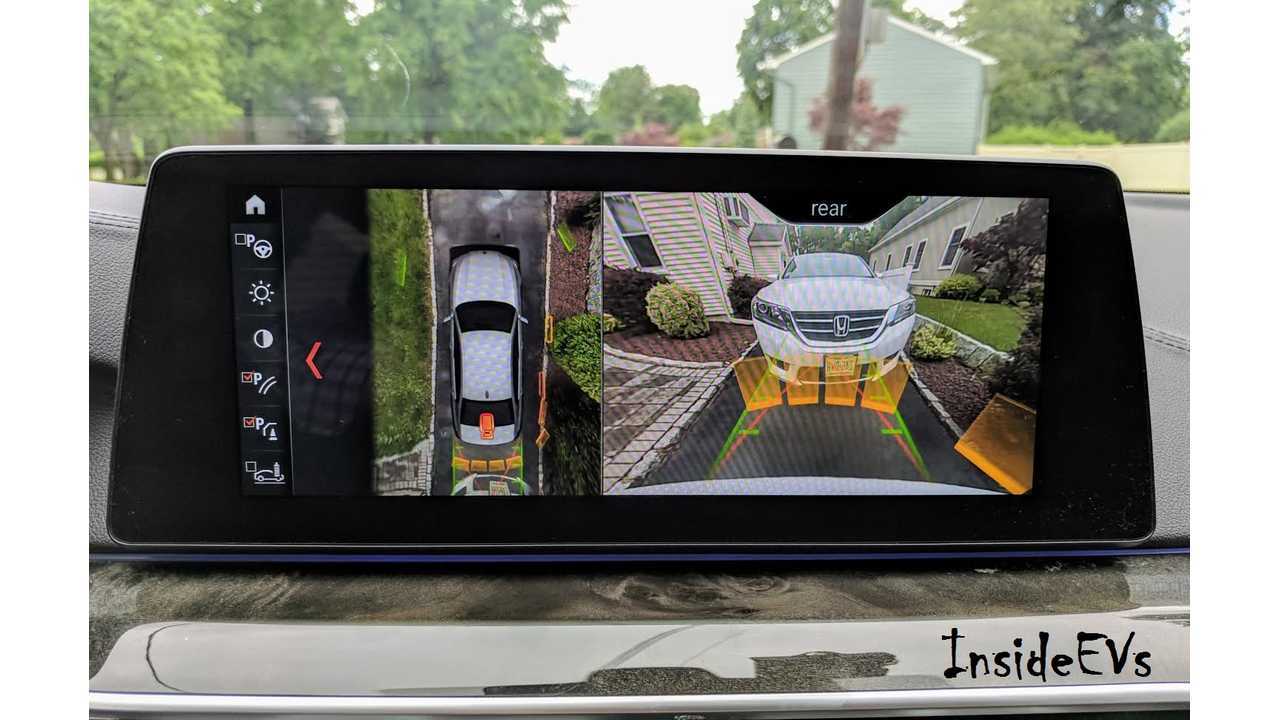 I really liked the 360-degree, birds-eye view. You can touch any part of the car on the display and the picture on the right gives the view in the direction pressed. In the picture above, I pressed the rear view.

On the road, the 530e was a pleasure to drive. Like any 5-Series, the car can be a mid-size luxury sedan, coasting down the road with the family one day, and carving up winding roads like a true sports sedan the next. Having the car for nearly three weeks, I was able to spend some time in all driving conditions, including New York City traffic one day, and way out in the winding rural roads of Sussex County, New Jersey the next. It’s very well balanced and doesn’t feel at all like it’s a 4,266 lb car when you’re pushing it to the limits.

I found the eight-speed transmission very smooth but I have to admit it felt a little strange to drive it in all electric mode and feel the gears shifting. After driving electric for the past nine years I’ve become accustomed to the single speed transmissions that EVs have. BMW accomplished this by replacing the torque converter with the electric motor. The motor is positioned upstream of the transmission, and that allows its gear ratios to also be used in all-electric mode. 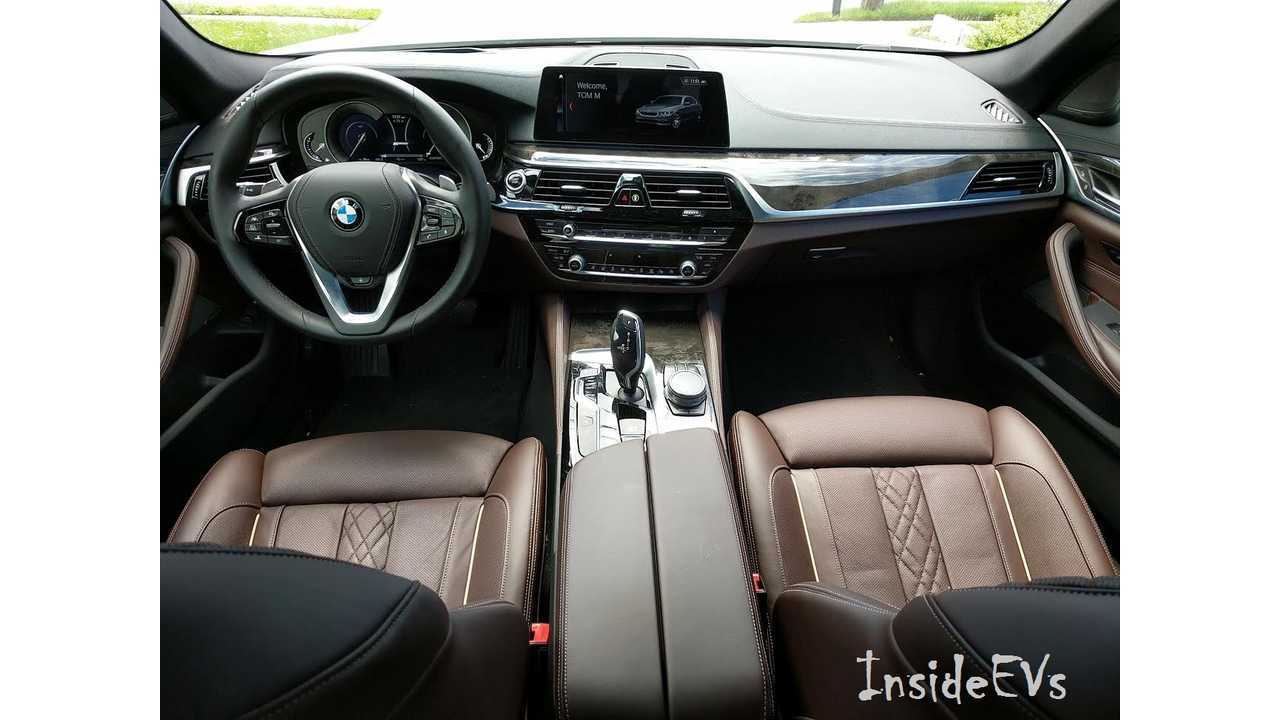 My 530e had the optional Luxury Seating package ($1,600) which has heated, air conditioned and massaging front seats. They were probably the most comfortable automobile seats I ever had the pleasure of sitting in.

One thing that really impressed me was how quiet and seamless the switch was from Max eDrive mode to the blended Auto eDrive. The only way I could tell the gasoline engine had turned on was from the driver’s display, and the slight vibration I could feel under acceleration. The cabin remains nearly as quiet in hybrid mode as it is in all electric mode. There were a few times when I didn’t even realize the gas engine had turned on until I looked at the display.

While I really enjoyed the driving experience, I was a little disappointed by the lack of the instant off-the-line torque. There’s a little lag, even in all electric mode that I’m not used to feeling with an electric vehicle, even if it’s a PHEV. Also, when selecting Max eDrive, the power is reduced because you’re only using the 113 hp electric motor. If you press the accelerator to the floor, the gas engine fires up and immediately supplies the extra boost requested. Additionally, when driving in Max eDrive mode, if you use the paddle shifters the gas engine will also automatically engage.

The regenerative braking isn’t nearly as strong as it is on the BMW i3, but it is strong enough to feel it working while you coast. I was watching the battery gauge on long highway drives and noticed how much the regen was adding back to the battery. Every now and then the car would switch back to all electric and use the energy that was recaptured by the regen until it was depleted again. I like how the car wants to drive in all electric mode as much as possible, and keeps switching to it as soon as the regen adds enough energy back into the battery to do so. 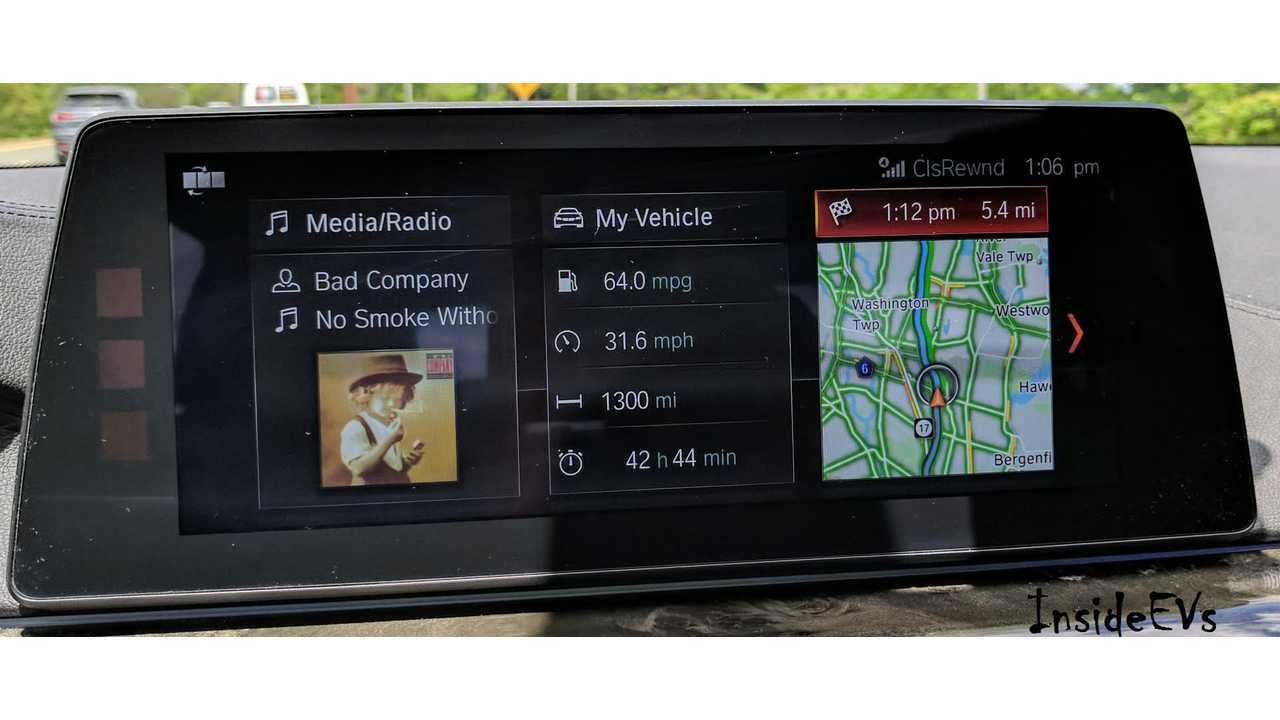 Now for the really impressive figures. Over my two-plus weeks with the vehicle, I drove a little over 1,300 miles and averaged 64 miles per gallon. 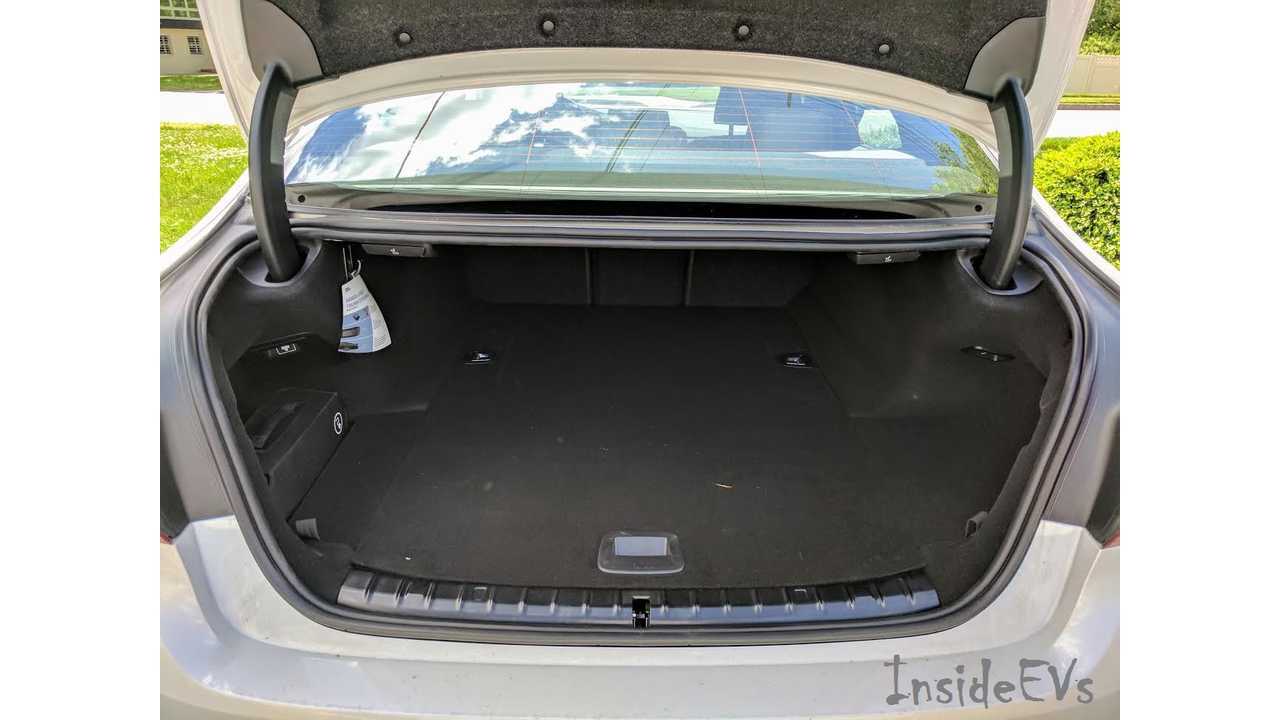 The trunk on the 530e is slightly smaller than the standard 5-Series trunk, but still offers a flat-floor, unlike other BMW iPerformance models.

Granted, my fuel economy was helped by the fact that I could charge at both ends of my 35-mile daily commute, something that not all people will have the opportunity to do. On my longer trips covering at times over 100 miles, I averaged 38 mpg while driving in Auto eDrive mode, which is still very impressive for a mid-size luxury sedan.

The gas tank on the 530e is reduced to only 12 gallons from the 18-gallon tank in the 530i. That’s partially because the battery takes up needed space under the vehicle, but also for weight savings which improves efficiency. Plus, with the ability to plug in, the 530e should get most owners well over 400 miles per tank. I needed a mere 21 gallons of gas for the 1,350 miles I drove during my testing.

Another consideration to note is that the trunk space is slightly smaller than the standard 5-Series.

It has 15 cubic feet of space compared to 19 for the gasoline-only versions. However, when the rear seats fold forward the floor from the trunk forward is still a flat surface, unlike the 740e iPerformance, which has a bump between the two spaces making it more difficult to accommodate long items. 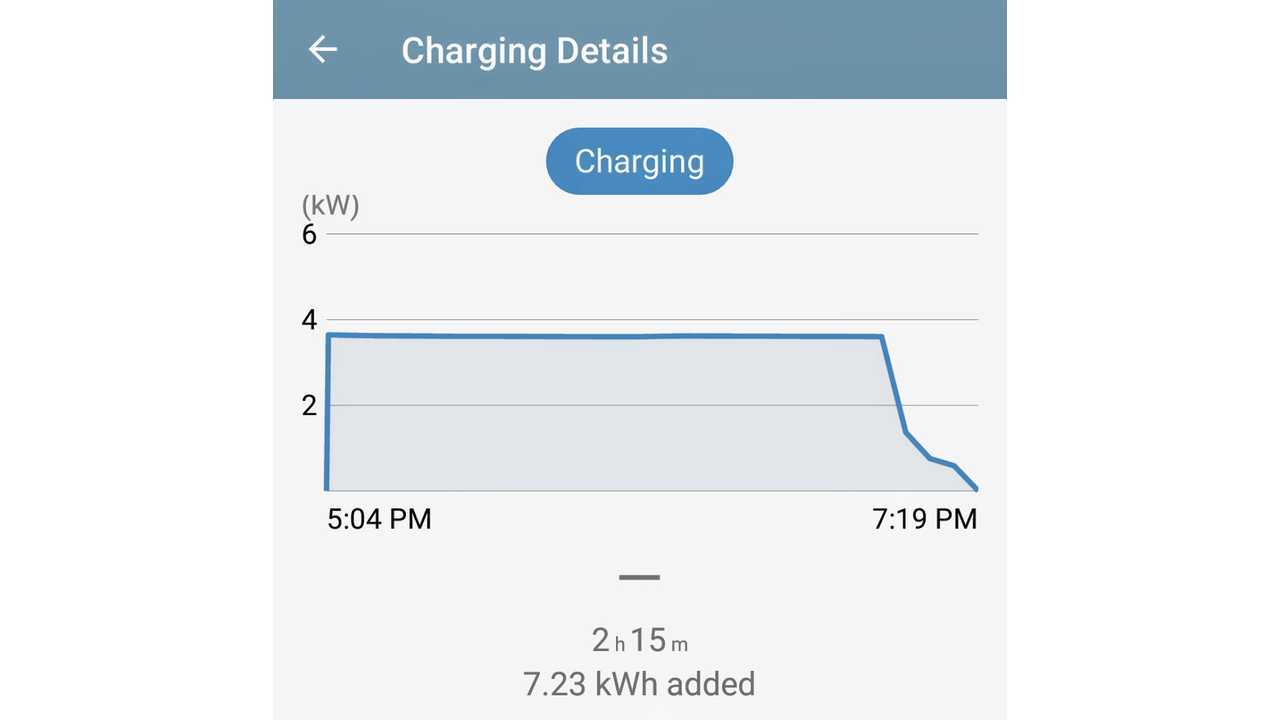 BMW claims the 530e will charge in about three hours when charging from a 240V source. My charging times were a bit more optimistic. When the battery was fully depleted, I was able to fully recharge in 2 hours and 15 minutes, sometimes even a little less. The car consumed between 7 kWh and 7.25 kWh to fully recharge, so I assume with charging losses it has about 6.75 kWh of usable capacity from the 9.2 kWh pack. That would also align with the EPA rating, and electric range I was able to achieve.

Considering the 530e qualifies for a $4,668 federal tax credit, that means most 530e owners will save as much as $4,468 compared to the effective cost of a 530i. Honestly, if BMW doesn’t sell every one of these the minute they hit the dealership then there’s a problem with their client advisers, because it’s really a no-brainer.

The 530e also qualifies for a $1,500 CVRP rebate and HOV lane access in California, two more reasons to consider it if you live in the Golden State. In my opinion, it’s definitely the best PHEV value in BMWs iPerformance lineup. 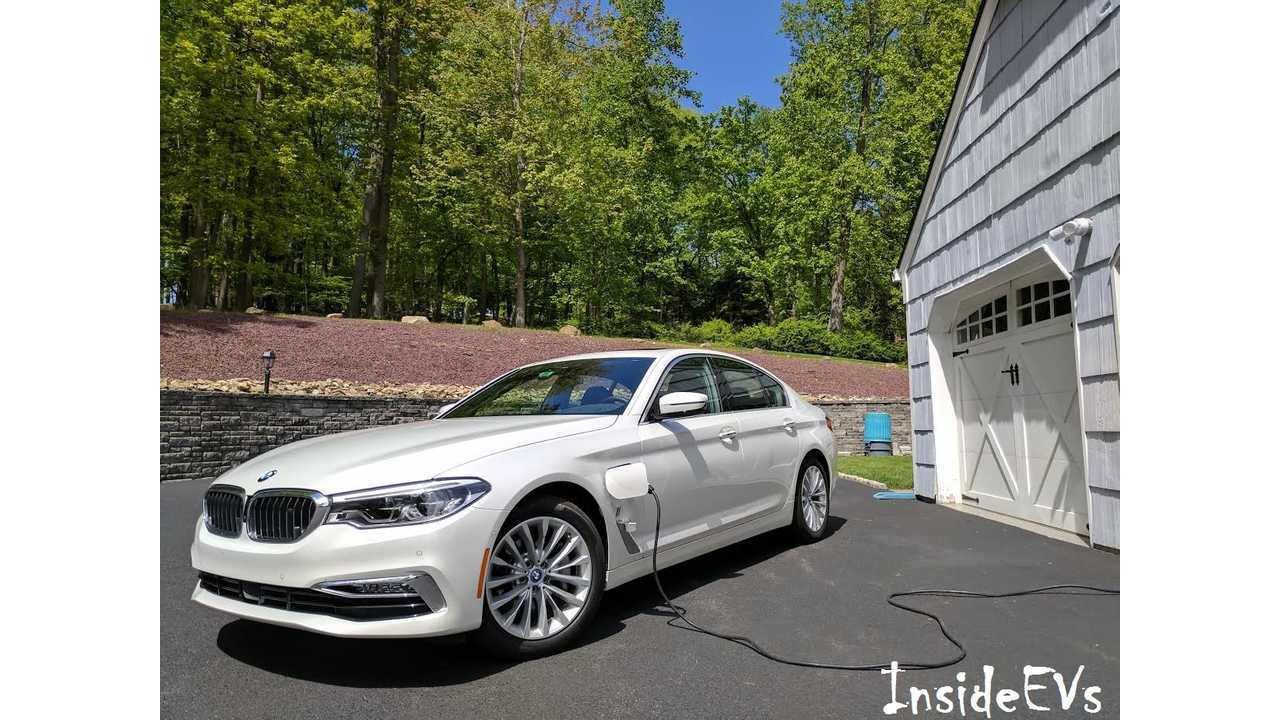 While the 530e may not convince many Model 3 enthusiasts to cancel their reservation, it will get a lot of loyal BMW owners into a car with a plug. I can see a typical 5-Series owner going to their dealership because their 2014 5-Series lease is expiring, and leaving with a 530e.

Like most PHEVs, the 530e is an EV with training wheels, and in many cases the people who buy a PHEV get another one, or move to an all-electric vehicle when they’re ready for their next car. I think most 530e owners are going to be very happy with the car. The value, performance and fuel economy of the 530e definitely won’t discourage them from getting another plug-in, when the time comes to replace it.