Ford is aware it must do everything it can to make sure its dealers are helping with EV sales, not hurting.

Ford has made it very clear it's following Tesla's lead in more ways than one. If it could do away with its dealer network for EV sales, perhaps it would do just that. However, its hands are basically tied, so it's working with dealers to make sure they facilitate a healthy transition to EVs rather than causing contention.

Not long ago, we shared that Ford threatened to stop sending inventory to dealers that participate in price gouging. Now, with the all-new F-150 Lighting in production, and demos arriving at dealerships, Ford has issued another warning to its vast dealer network.

According to the recent dealer memo first discovered and shared by the F-150 Lightning Forum, dealers must refrain from selling Lightning demo units early. The memo was related to Ford's Courtesy Transportation Program (FCTP), which is the company's unit that provides demo cars to dealerships. The memo states that Ford will send one electric truck demo unit to each dealer beginning in the middle of this month. The opening portion of the memo reads:

"This memo warning against premature sales of Lightning mannequins has been circulated to dealerships from Ford. 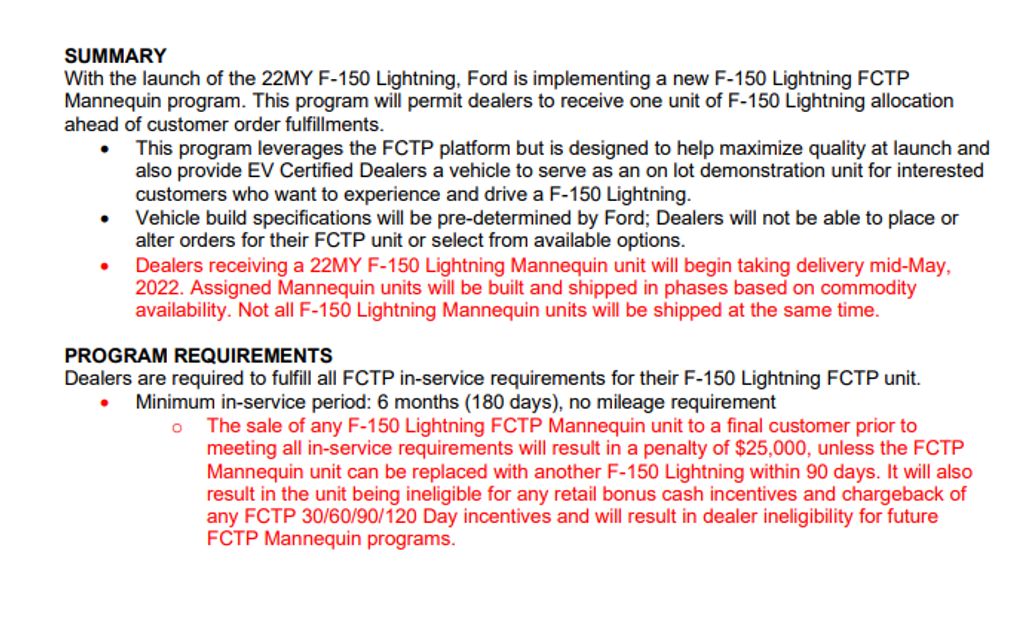 Based on the details provided in the memo, Ford dealers must have F-150 Lightning demos in service for at least six months, though there's no mileage requirement. If the dealerships were to sell the units too early, it could result in a penalty of $25,000, unless the demo can be replaced within 90 days.