Study Suggests Consumers Trust Tesla The Most For Future Autonomy

Fully autonomous vehicles are still a long way off, but Tesla is convincing people it has what it takes to lead the industry.

Regardless of what you believe based on Elon Musk's claims, as well as those from excited Tesla owners, and investors, there won't likely be fully self-driving cars on the roads for some time. At least not those that are 100 percent capable of piloting a car with no attention or potential interventions from drivers. When true autonomy eventually becomes a reality, cars will be able to be produced with no steering wheel or pedals.

In its current form, Tesla's Autopilot and Full Self-Driving (FSD) Capability technologies require active driver supervision and participation at all times. Tesla's FSD suite is still in Beta form, and it's only being tested by employees and owners the automaker has approved to act as beta testers.

Nonetheless, a consumer survey suggests that Tesla is currently the brand that's most trusted by consumers to develop future fully autonomous cars that are safe and reliable. This, at least according to a recent survey by AutoPacific.

The AutoPacific study was delivered to 600 US drivers across a wide variety of areas. The company went to great lengths to make sure that all ages of drivers were represented, with the average age of respondents coming in at 43. The study also covered a mix of suburban (49%), urban (27%), and rural areas (24%).

Essentially, people were asked which brand they trust the most when it comes to the development of future fully autonomous vehicles (AVs) that are safe and reliable. The following chart lays out the results: 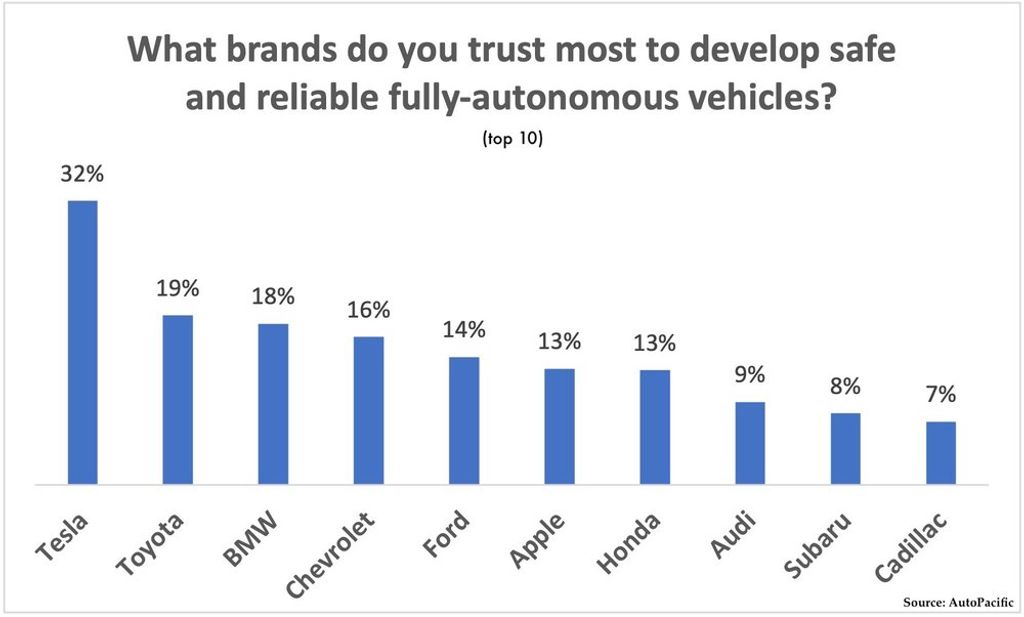 It's important to note, no matter how much emphasis companies put on ensuring that studies and surveys like this are representative of the masses, we can't assume that the entire population would agree with this chart. Nonetheless, despite plenty of negative news surrounding Tesla's systems, as well as how it's testing FSD Beta, the respondents chose the company as the leader.

That said, it comes as no surprise Tesla is on top. Its Autopilot system has been in the news for years, and it's something many people have at least heard of. AutoPacific says we can likely credit the "buzz" around Tesla's tech as part of the reason it fared so well.

Tesla is the leader when it comes to EVs, and it's also seen by many as a cutting-edge tech company that's moving headfirst into areas where other automakers are just beginning to get their feet wet. While many other brands have been quietly working on self-driving systems for years, the masses are likely largely unaware of all the behind-the-scenes progress (as well as the lack thereof).

Interestingly, Apple, a company that has never made a car or revealed official plans to move forward with one, performed quite well in the survey. Much like Tesla, Apple is a leader among its rivals, it's innovative and ridiculously successful. Similarly, while it's not on the chart above, Sony also got a nod here, with 5 percent of respondents picking it as the most trusted brand.

AutoPacific also provided some interesting takeaways from the study, including the following details based on how the age of respondents impacted their answers:

Are you surprised? Do you agree or disagree with the respondents? Leave us your thoughts in the comment section below.