The timeframe is relatively short as well as the fleet is expected to be deployed by the end of 2022.

Hertz announced today an unprecedented investment in electrification of 20% of its vehicle rental fleet, which will result in the deployment of 100,000 all-electric cars by the end of 2022.

The company intends to have the largest EV rental fleet in North America and one of the largest in the world, because consumer interest in EVs is skyrocketting.

Hertz's EV push includes "an initial order of 100,000 Teslas by the end of 2022 and new EV charging infrastructure across the company's global operations."

It means that Tesla basically has received an order for 100,000 electric vehicles. The first cars, which happen to be Tesla Model 3s, are supposed to be delivered in November - simultaneously in selected location in the U.S. and Europe.

"Beginning in early November and expanding through year end, customers will be able to rent a Tesla Model 3 at Hertz airport and neighborhood locations in U.S. major markets and select cities in Europe. To learn more, visit hertz.com/ev."

With the new order (100,000 represents about 10% of Tesla's current production volume of up to 250,000 per quarter or around 1 million EVs per year), the customer's queue will be even longer. Tesla will have to deliver all cars within about 14 months from now.

Hertz notes that customers will be able to use the Tesla Supercharging network, but we are not entirely sure whether it will be free or require a fee.

"Hertz also is installing thousands of chargers throughout its location network. Customers who rent a Tesla Model 3 will have access to 3,000 Tesla supercharging stations throughout the U.S. and Europe.

Hertz will offer a premium and differentiated rental experience for the Tesla EVs. This includes digitized guidance to educate customers about the electric vehicle to get them on their way quickly, and coming soon, an expedited EV rental booking process through the Hertz mobile app."

The initial order of 100,000 is the beginning of a volume shift (the company first included a small number of EVs in 2011). It's expected that gradually, Hertz will replace its entire fleet of 500,000 cars with EVs, but only time will reveal whether all of those will be Teslas.

"With the current order, EVs will comprise more than 20 percent of Hertz global fleet and is expected to be supported by a combination of Level 2 and DC fast charging in approximately 65 markets by the end of 2022 and more than 100 markets by the end of 2023. Hertz said these ambitions could be affected by factors outside of Hertz's control, such as semiconductor chip shortages or other constraints."

"Today's investment in electric vehicles builds on Hertz's pioneering work in its rental operations during the past decade. Hertz was the first U.S. car rental company to introduce EVs to its rental fleet in 2011 and the first to implement a wireless charging system for electric vehicles. The company also is the exclusive rental car member of the Corporate Electric Vehicle Alliance, a consortium of companies focused on accelerating the transition to electric vehicles. "

This deal is an interesting also because of one more thing. Hertz, after exiting bankruptcy several months ago, is lead by a new interim CEO - Mark Fields, who previously was Ford's CEO (2014-2017). He said:

"Electric vehicles are now mainstream, and we've only just begun to see rising global demand and interest. The new Hertz is going to lead the way as a mobility company, starting with the largest EV rental fleet in North America and a commitment to grow our EV fleet and provide the best rental and recharging experience for leisure and business customers around the world."

To promote the switch to EVs, Hertz is partnering with seven-time Super Bowl champion Tom Brady for a new "Hertz, Let's Go!" campaign.

According to Bloomberg, the agreement with Tesla is not exclusive and Hertz might buy EVs also from other manufacturers (while Tesla can partner with other rental companies). Previously, the largest car supplier (in 2020) was GM, Nissan and Ford. 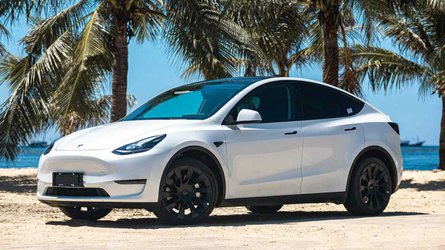 Tesla Q3 2021 Final EV Delivery Numbers And Outlook
By: Mark Kane
++
Got a tip for us? Email: tips@insideevs.com