Tesla and Elon Musk have always had lofty goals, but this may be the wildest yet.

Posted on EVANNEX on October 08, 2021 by Matt Pressman

Usually, the big headlines from Tesla's annual shareholder meeting come from the company's CEO, Elon Musk. And there were some key takeaways which we'll touch on in a moment. That said, what struck me was a statement early on when Tesla's Board Chair Robyn Denholm said, "By 2030, we are aiming to sell 20 million electric vehicles per year."

Above: Tesla's Model 3 is now the top-selling premium vehicle in the world (Source: Charged / Tesla)

That's a lofty goal considering the company only delivered about half a million cars in 2020. Nevertheless, Tesla is growing at a frenetic pace. And it's not just the company's stock price that's experienced massive growth. When Elon Musk took the stage he referred to a slide that showcased an impressive 71% compound annual growth rate (CAGR) since 4Q 2016.

Above: A look at Tesla's CAGR (Source: Tesla)

Pointing to this growth, Musk said, "I think this might be the fastest that any large manufactured object has grown. Like – yes, certainly, one of the fastest, perhaps the fastest and it looks like we have a good chance of maintaining that [growth] into the future, really dependent on supplier challenges... but I feel confident of being able to maintain something like this, at least above 50% for quite a while."

Above: In just four years, Tesla has pulled ahead of Mercedes, BMW, and Audi to take the crown (Source: Tesla)

Above: Musk forecasts Model Y to be best-selling vehicle of any kind globally once production ramps in Austin and Berlin (Source: Tesla)

After Model Y gets up-and-running at Tesla's new factories in Austin and Berlin, the company plans to launch the Cybertruck (along with its super-safe ATV), Semi, and Roadster. He also teased the possibility of a Tesla van this decade and promised more growth in the solar and stationary battery storage business divisions as well.

Above: Tesla fanboys will soon be clamoring for this belt buckle (Source: Tesla)

The big news: Don't Mess with Tesla! Why? They're changing their headquarters to Texas. Musk explained, "I’m excited to announce that we’re moving our headquarters to Austin... our factory’s like 5 minutes from the airport, 15 minutes from downtown. And we’re going to create an ecological paradise... out on the Colorado River, it’s going to be great." 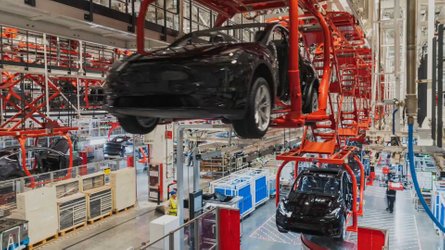 Tesla's Giga Shanghai Has Overtaken The Fremont Factory In Output 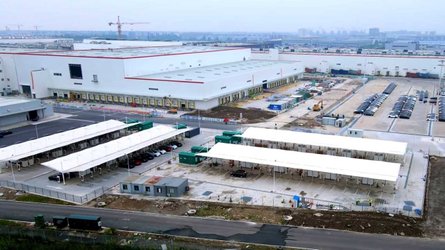 Tesla Paid Off $1.4B China Gigafactory Loan Early, Confirms Musk
By: EVANNEX
++
Got a tip for us? Email: tips@insideevs.com