The all-electric car sales more than doubled so far this year.

The BMW Group reports a 12% decrease year-over-year for its global car sales during the third quarter, but the year-to-date result is positive - up almost 18% year-over-year.

The overall Q3 results and YTD through September stand at:

The most important thing for us is that the plug-in electric car sales (BMW and MINI brands) continue to increase at a very high rate.

So far this year, the BMW Group has more than doubled its all-electric car sales. That's an important trend as the plug-in hybrid sales are not growing so quickly.

According to the manufacturer, the outstanding growth of BEVs was achieved thanks to the BMW iX3 (20,887 units YTD), which entered the European market in early 2021.

"In particular, the fully-electric BMW iX3*, which has also been available in Europe since the start of the year, gave sales a major boost, with a total of 20,887 units sold in the year to date."

Soon, the iX3 will be joined by the BMW iX and BMW i4 (in Europe in November).

“We have more than doubled our sales of fully-electric vehicles since the start of the year – and are therefore underscoring our impressive electro-offensive,”

“With the launch of the BMW iX and BMW i4 from November, we will have two new vehicles in the market that will further accelerate the ramp-up of electromobility. New orders worldwide already reflect our customers’ enthusiasm for these new models,”

MINI reports that the MINI Cooper SE noted 106.6% year-over-year increase during the first nine months of this year, reaching 20,104 sales.

Overall, plug-ins are responsible for 15.2% of MINI volume YTD, which is about 34,175 according our estimates. That would leave BMW with additional 197,400 or so. 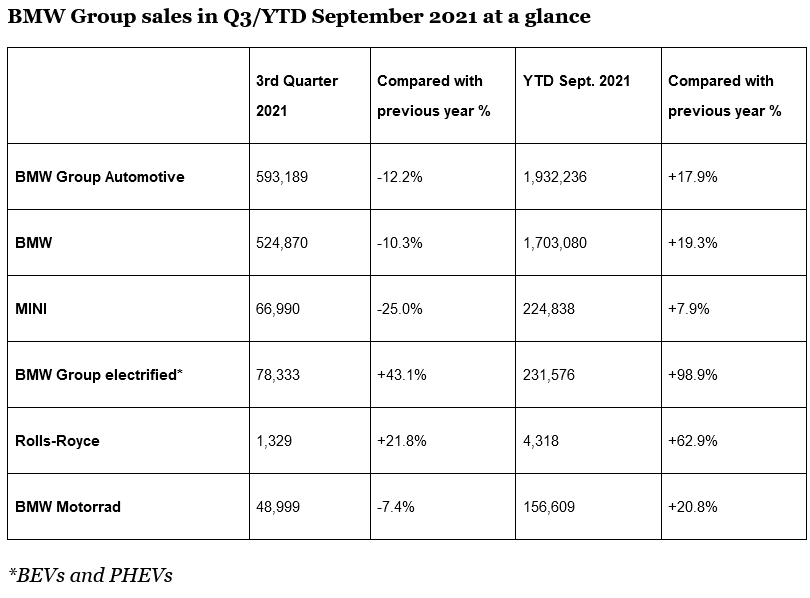 BMW Group says that besides the iX and i4, multiple additional all-electric cars will be introduced in the next few years, including:

The plan includes deep electrification of the entire lineup of all brands:

Tesla Production And Deliveries Graphed Through Q3 2021
Volvo Recharge Share Expands To 27% In September 2021
By: Mark Kane
++
++
Got a tip for us? Email: tips@insideevs.com