Plug-in sales more than doubled and the Tesla Model 3 was the best-selling car of any kind.

New passenger car registrations in the UK amounted to 186,128, although the growth rate of  28% year-over-year is considered "artificially lifted" as the 2020 year was affected by lockdowns.

The plug-in electric market on the other hand continues to expand at a rapid rate. In June, the number of registrations increased 131% year-over-year to almost 32,000. That's 17.2% of the market!

It's one of the best months ever and let's take a note that all-electric cars took more than a tenth of the market.

So far this year, more than 132,000 new passenger plug-in cars were registered in the UK at an average market share of 14.5%. 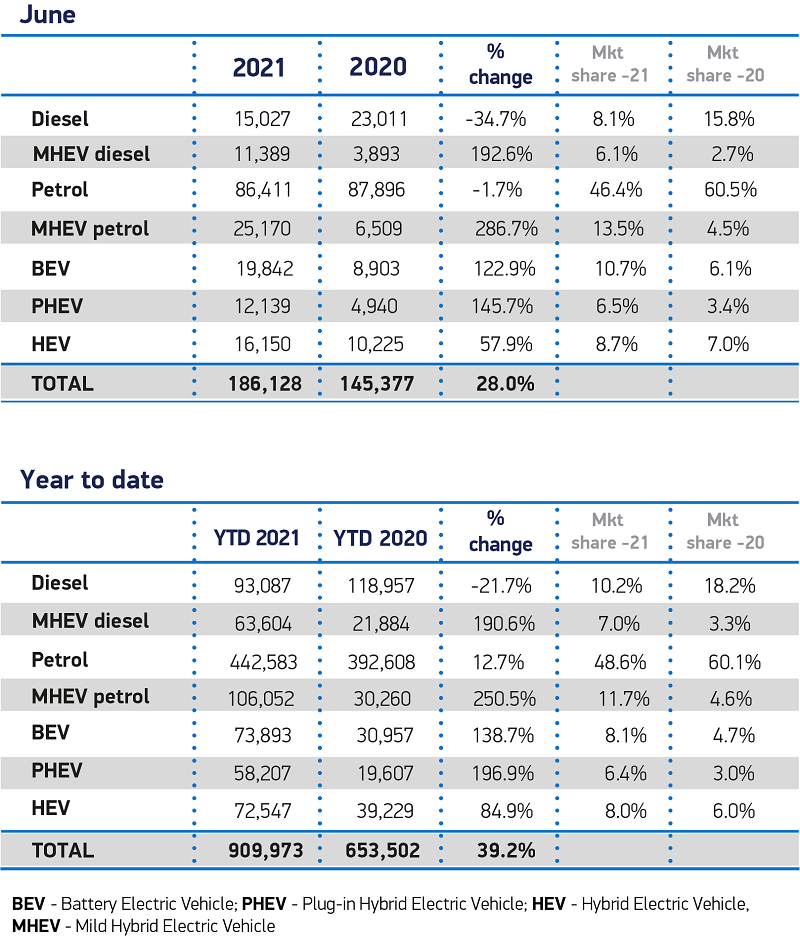 In June, the volume deliveries of the Tesla Model 3 (as usual in the last month of a quarter) resulted in a very strong result of 5,468 registrations, which is the best result overall.

Vauxhall (part of Opel) reports that the Vauxhall Corsa-e (in the rest of Europe known as Opel Corsa-e) noted 2,795 sales so far this year and remains the best-selling all-electric supermini (the Corsa is also #1 overall with 24,399 ICEs/BEVs).

Vauxhall Vivaro-e is the top-selling electric delivery van in the UK, with a record of 613 units in June, and 1,487 YTD. Sales of the Vivaro-e clearly accelerate thanks to a huge order backlog.

"Vauxhall enjoyed a successful first half of 2021 in the LCV sector, with e-LCV sales topping 1,487. Vauxhall is now one of the few manufacturers able to offer fleets and business customers an electric van across its entire LCV line-up, following the announcements of its All-New Movano-e large van and the All-New Combo-e compact van.

Sales success in the first half of the year was underpinned by the multi-award winning all-electric Vivaro-e, which has seen record sales of 613 in June, making it the best-selling model not only this month, but for the year-to-date in the a e-LCV sector."