Despite using a target of 20,000 EVs in 2022 for its SPAC presentation, Rawlinson will no longer confirm that earlier goal.

During a recent interview on CNBC, Lucid Motors CEO Peter Rawlinson talked about Lucid's future, with some information about the upcoming Air electric car. While he remained confident about the brand's timelines and growth goals, he was unwilling to substantiate an earlier claim that the automaker would produce 20,000 EVs in 2022. Rawlinson shared via Teslarati:

“Well, we’re on track to put Lucid Air—the car behind me—into production in the second half of this year. And we’re really making great progress here on three fronts."

The CEO with a history in Tesla went on to say that the factory is "ready and up and running." He also noted that the quality of the Air is improving, and Lucid is nearing daily production. Rawlinson confirmed that the brand is also already rolling out its sales and service network, with some six stores currently open in the US, and four additional stores set to open soon.

Rawlinson mentioned once again that Lucid is on track to begin official production in 2021, with a production goal of over 577 vehicles before the end of the year. However, when CNBC asked about the previous goal of 20,000 cars by 2022, Rawlinson didn't confirm.

Why 20,000 EVs? In an earlier SPAC presentation, Lucid revealed a slide that showed a goal of 20,000 cars in 2022. At this point, Rawlinson is only willing to project "significant growth" for next year. 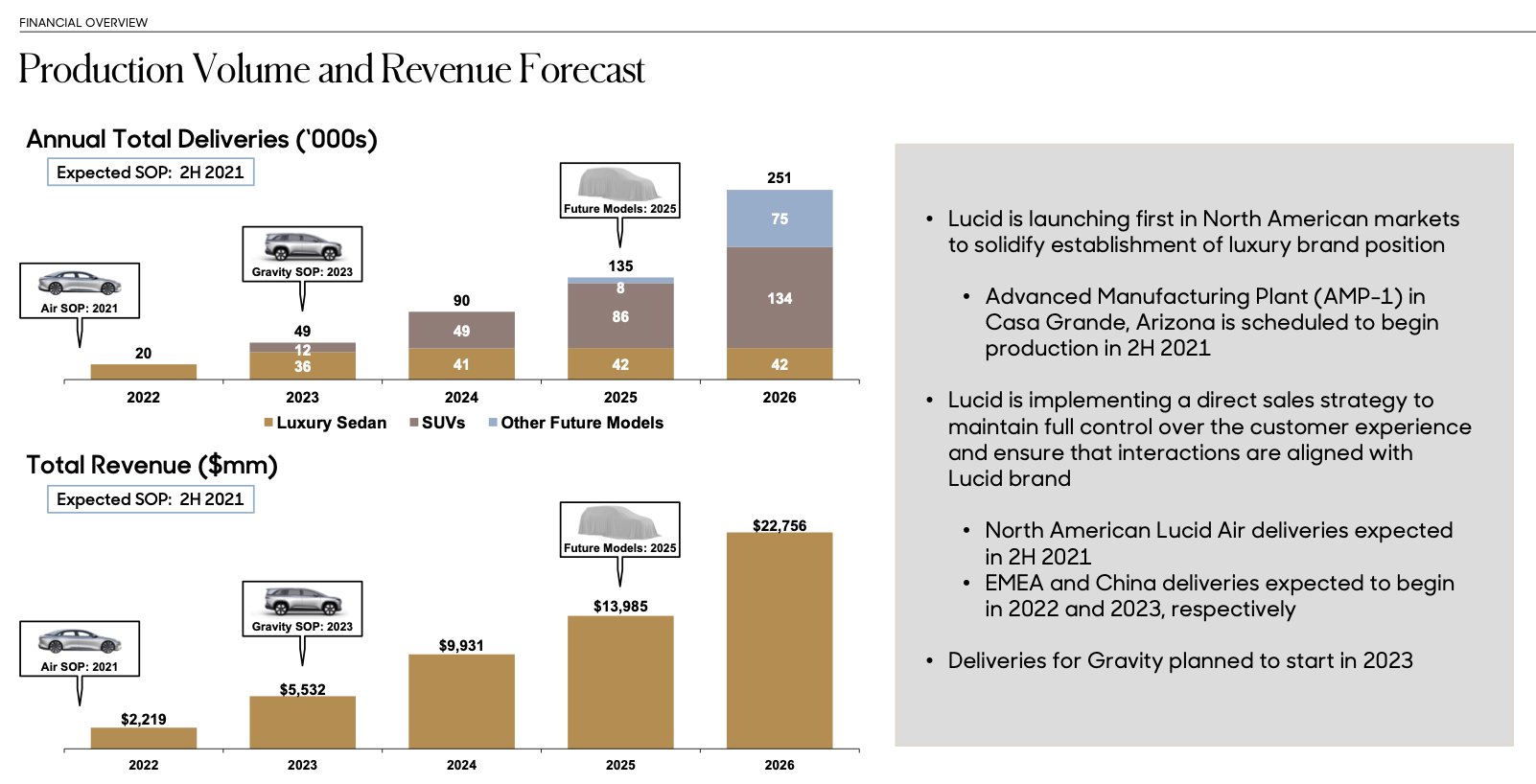 The slide above is part of a series of slides that have been shared around social media. There is a link to a PDF of the entire slide deck on Lucid's website in the tweet below, but interestingly, it's not working.

This all comes as no surprise since we've watched what has happened to many an EV startup over the years, and especially those involved in a SPAC. It is a good thing that Rawlinson has decided not to overpromise and underdeliver, or a bad thing that the company put together a SPAC presentation with the goal of 20,000 cars in 2022 and now won't officially commit to it? We'd love to read your take in the comment section below.

We’ll Know Lucid's User Experience On May 26: What’s The Mystery?

Op-Ed: A Look At Tesla Compared To New EV Startups

The $40,000 Ford F-150 Lightning Base Model Is A Crazy Bargain, But Why?
First Rivian R1S Reviews: A Great Vehicle For Family Road Trips
New Study: Changes In Driver Behavior Related To Tesla, Other EVs
Twitter Investors Sue Elon Musk For Manipulating Stock
The Ducati MG-20 Is An Electric Folding Bike That Packs Quite A Punch