Warning. The embedded tweet below contains a word that's NSFW. However, that certainly wasn't enough to keep us from sharing this highly impressive Tesla Full Self-Driving (FSD) Beta video. It's one of many clips put together by beta tester Whole Mars Catalog (@WholeMarsBlog) to show the technologies ins and outs.

If you follow Whole Mars Catalog, you're likely aware that he's a huge Tesla fan and promoter. With that said, he has been clear that while Tesla's FSD Beta semi-autonomous driving assistant has proven it can pilot with zero interventions in some cases, that's not always the case. Beta testers must remain aware and engaged in case the system fails.

We'll go back to our earlier suggestion that driving a Tesla with FSD is a bit like teaching a teen to drive for the first time. You're in the passenger seat, paying close attention and ready to either yell, scream, or grab the steering wheel at a moment's notice. You're impressed when your teen tackles a difficult situation with ease, and then, a moment later, your teen makes a stupid move that practically gets you killed.

Whole Mars Catalog has shared many zero-intervention drives, but this recent one is far better than anything we've seen to date. Keep in mind, this is version 8.2 of the FSD system. According to Elon Musk, 8.3 will be exponentially better, and version 9 will allow Tesla to roll out the technology much more widely due to its vast improvements.

In the short video below, you'll see the Tesla pilot itself in the dark, through busy city streets with crossing pedestrians, two-way stops, four-way stops, double-parked cars, oncoming traffic in the wrong lane, and much more.

It's these types of edge cases that make self-driving so difficult. Sure, a car can be programmed to drive itself in select "geo-fenced" areas with set parameters. But, to just head out onto any road and hope for the best requires an extremely intelligent car. A car that "sees" everything around it and makes every effort to navigate safely avoid a potential collision.

While the system is far from perfect, it seems to be doing its job (with the help of the very alert beta testers). Musk points out that there have been no accidents thus far in the beta-testing process.

Tesla Expands FSD Beta To 2,000 Owners And Revokes It From Some
⠀ 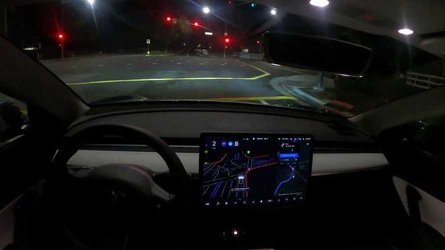 First, watch the short video. Then, let us know if you're impressed. Is this the real deal? With incremental improvements, can Tesla prove that FSD will drive without interventions most of the time? All the time? Let us know your take on Tesla's semi-autonomous technology.