Already well over one million new plug-in cars were sold in Europe in 2020, with one month to go.

The unprecedented growth of plug-in electric car sales in Europe continues. In November, sales hit another monthly record and that's just an introduction to what we will see in December (often the strongest month of the year).

EV Sales Blog reports 166,255 new passenger plug-in car registrations, which is 198% more than a year ago. The market share has reached an amazing level of 16%! Really great results, compared to the overall car market, which went down by 14% year-over-year.

It was also a month of parity between BEVs and PHEVs:

The Volkswagen ID.3 was the second-best (8,496) and it's now the sixth best selling plug-in model YTD, with big chances for fourth place in 2020 (and a small chance for the third place).

The Hyundai Kona Electric was third (5,375), just like in November, which seems enough to maintain third place overall in 2020.

The Tesla Model 3 noted the fourth best result for the month (5,014 units). Tesla's best selling model is #2 YTD with over 63,000, and it will not change, as even a great December will not compensate for the 20,000 difference to the ZOE.

The fifth plug-in (and the first PHEV) happened to be Mercedes-Benz A-Class 250e (4,517), which might also become the #1 PHEV YTD, ahead of the Mitsubishi Outlander PHEV. This will be an interesting race for sure as Volvo XC40 PHEV also has a big chance to beat the Outlander PHEV.

Many plug-in models noted personal best monthly results in November, which indicates a general expansion of the entire market - not just a few top or new models. 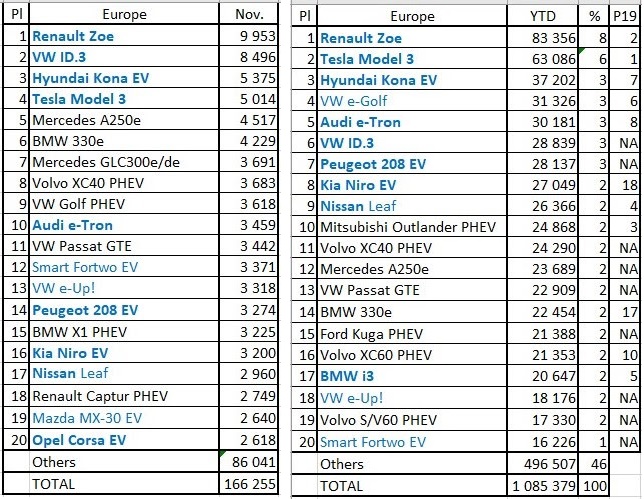