A new study commissioned by Castrol says a majority of car buyers are ready to buy an electric car by 2024.

Posted on EVANNEX on September 18, 2020 by Denis Gurskiy

It’s anyone’s guess when electric vehicle adoption will suddenly become mainstream. Some say five years. Others say ten, fifteen, even twenty years from now. However, a new study commissioned by Castrol, producers of motor oil and other vehicle fluids, states that a majority of car buyers are ready to buy an electric car by 2024 and provide EV specifications that should, ultimately, appeal to the masses.

Castrol's opinion poll was given to 9,000 drivers, 750 fleet owners, and 30 automotive industry professionals across the United States, United Kingdom, Norway, France, Germany, India, China, and Japan in order to gather their opinions on electric cars and how they view their future. A snapshot of the study's key findings are showcased in a handy infographic (featured below).

The big takeaway from the study showed that both regular customers and fleet owners are open to the idea of purchasing electric cars. However, both groups may be currently holding off on an EV purchase as they believe that there will be significant tech advances in the next 4-5 years.

According to the survey, "the majority of consumer respondents to our survey said they themselves would consider buying an EV in 2024, just four years away. However, 61% of consumers are adopting a ‘wait and see’ approach and believe that research and development into battery technology will be fundamental... [and] although 58% of fleet managers are personally motivated to make a positive difference to the environment by making their fleet fully electric, over half (54%) are waiting for their competitors to make the switch before they do."

What the study found was that when averaging out the opinions of the eight countries surveyed, the average customer is looking for an electric car that starts at $36,000, has 469 km (291 miles) of range, and can charge in 31 minutes.

These optimum tipping points varied greatly by country and whether an EV would be used for personal or fleet use. For instance, the UK was the most thrifty in regards to their EV price and stated a price of $29,883 while American consumers required the most amount of range of 321 miles. The French required the fastest charge time of 27 minutes.

Based on the study's findings, the ideal EV that would likely attract the most car buyers (globally) requires a sub-$30,000, 300+ mile, and sub-30 minute charging electric car. While the technology for 30-minute charges and 300+ mile ranges is already here, getting the price down is still an issue for most automakers. Furthermore, according to the survey, it’s the price (not the range) that's the biggest hurdle for car buyers.

However, the opposite was true for fleet owners who claimed that range was the biggest hurdle to EV adoption. Tipping point for fleet owners, according to the study, include a price of $49,500, 341-mile range, and a charge time of 36 minutes. In this instance, the UK fleet owners were the ones that required the most range, stating they required a whopping 444 miles of range.

Unfortunately, it seems like it may be a while before fleet EVs become more mainstream. However, a few EV makes are getting pretty close to what survey respondents were asking for. Out of curiosity, I averaged out the range and price of 11 popular electric cars (Tesla S/X/3/Y, Audi e-tron, Jaguar I-Pace, BMW i3, Nissan LEAF, Hyundai Kona Electric, Kia Niro EV, and Chevy Bolt) to get a better understanding of where we currently are at. 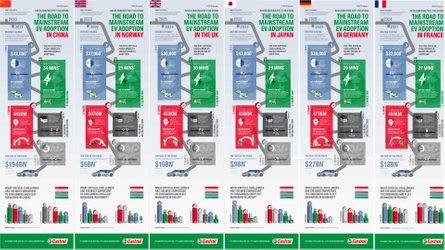 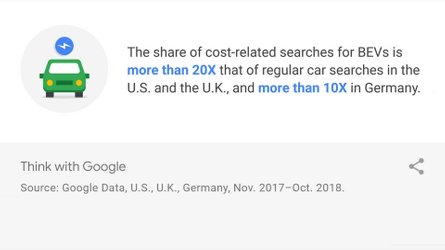 When averaging out the above 11 EV models, we get an average price of $45,853 and an average range of 264 miles. For those wondering, if you exclude the four Tesla models from the average then it turns into a price of $46,385 and a range of 227 miles. So it looks like the auto industry, as a whole, may still have a ways to go.

In any event, to get a snapshot of Castrol's key findings, check out the infographic below. The company's CEO, Mandhir Singh, sums it up best concluding, "the challenge now will be to accelerate EVolution as quickly as possible to contribute to one of the most important critical challenges of all: decarbonising our economy."

An earlier version of this article appeared on EVBite. EVBite is an electric vehicle specific news site dedicated to keeping consumers up-to-date on any developments in the ever-expanding EV landscape. Source / Infographic: Castrol