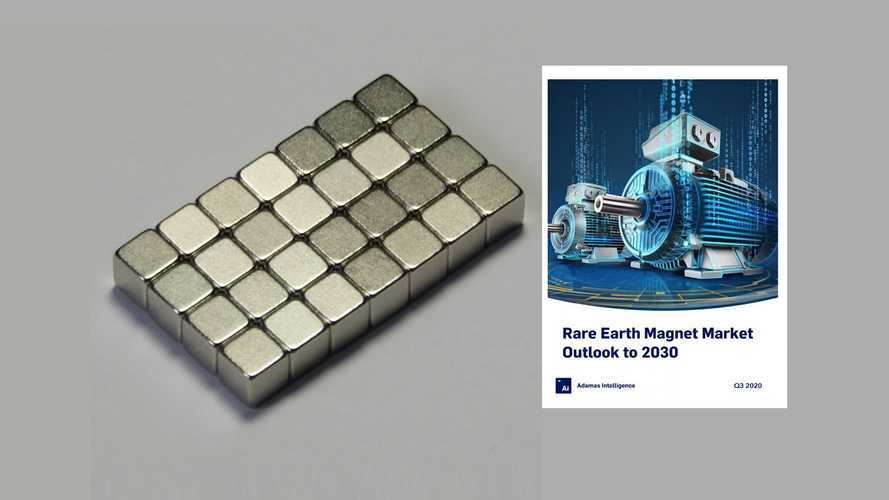 Demand and prices of NdFeB magnets to go up significantly and shortages are expected.

Electric vehicles are gradually becoming one of the largest "consumers" of NdFeB magnet production - mostly for electric motors (although not all types of traction motors utilizes magnets).

According to Adamas Intelligence's forecast, in 2030, EVs will be responsible for around 25% of NdFeB production. Besides traction motors (for passenger and commercial vehicles, as well as bikes/scooters/motorcycles), which will take 23% of the NdFeB market. EVs use magnets also in micromotors, sensors and speakers (the remaining 2%).

The company called its forecast "conservative", which means it might be more than that.

Before that happens, in 2020 the NdFeB magnet market will decrease noticeably due to COVID-19-related slowdown. However, in the longer term, it will not only be growing (2021-2030 and beyond), but significant shortages emerge on the horizon.

"After growing at a CAGR of 6.4% from 2015 through 2019, we forecast that global consumption of NdFeB alloys and powders will drop by 9.3% in 2020 on account of the ongoing negative effects of COVID-19 on demand for everything..."

In 2030, NdFeB shortages may be huge - 48,000 tonnes, which is an equivalent of 25 to 30 million electric vehicle traction motors. Manufacturers of electric vehicles can although use motors without magnets.

"Constrained by an expected under-supply of neodymium, praseodymium and dysprosium oxide from 2022 onward, Adamas Intelligence forecasts that global shortages of NdFeB alloy and powder will amount to 48,000 tonnes annually by 2030"

"Annual NdPr Oxide Shortages of 16,000 Tonnes Expected by 2030: Constrained by a lack of new primary and secondary supply sources from 2022 onward, Adamas Intelligence forecasts that global shortages of neodymium, praseodymium and didymium oxide (or oxide equivalent) will collectively rise to 16,000 tonnes in 2030, an amount equal to roughly three-times Lynas Corporation’s annual output, or three-times MP Materials’ annual output, of neodymium and praseodymium oxide (or oxide equivalents)."

The summary of the report gives us glimpses of what to expect on the market. It will be very interesting to see how carmakers will deal with those limited supplies and to what degree they will return to use induction motors or synchronous motors with rotor coil (like in the case of Renault).