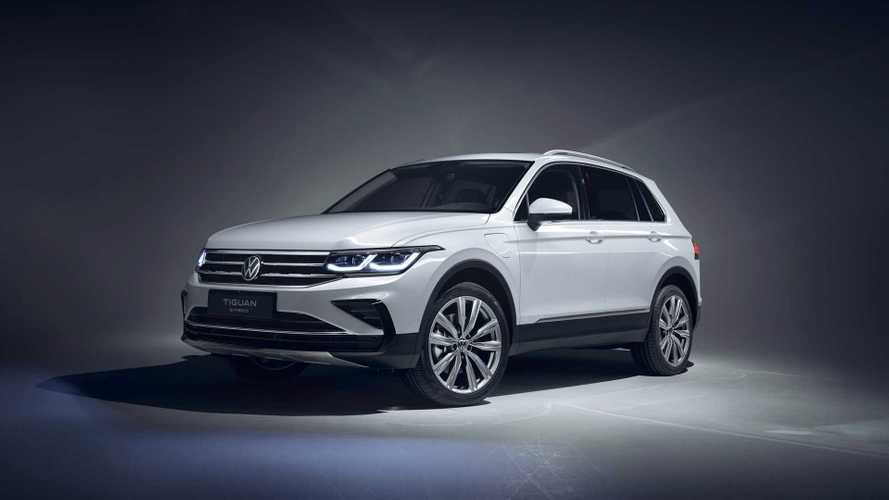 Another compact crossover/SUV is getting a plug-in hybrid version in Europe.

Volkswagen unveiled the new, highly updated Tiguan compact SUV, which in 2019 was the top-selling model for the brand and for the entire Group, with 910,000 units produced (over 6 million cumulatively).

The comprehensive update includes a new interior (MIB III infotainment system) and exterior styling (more muscular appearance), as well as new driver-assistance (like Travel Assist and Predictive ACC) and comfort features. But most importantly, Tiguan will finally be available also in the plug-in hybrid version (hinted at a few months ago here and here), named Tiguan eHybrid.

According to the press release, the Volkswagen Tiguan eHybrid, just like the top of the line Tiguan R, will be offered only in Europe, but there are no details about pricing or launch date. In the U.S., only the conventional, long-wheelbase version will be available.

"The normal wheelbase Tiguan goes on sale shortly in Europe. The U.S. will continue to receive the long-wheelbase version, which receives the same design changes and features noted above. The U.S. Tiguan will arrive in Fall 2021 as a 2022 model."

The all-electric WLTP range of the Tiguan eHybrid is expected at up to 50 km (31 miles), using a 13 kWh battery.

World premiere of the new Tiguan

Wolfsburg / Herndon, VA — In 2019, the Tiguan was the most successful model for both the Volkswagen brand and Volkswagen Group, with more than 910,000 units produced. Over its lifetime, more than six million have been produced, and the stage is set for Tiguan to receive a comprehensive update, including new interior and exterior styling, and innovative driver-assistance and comfort features.

The front end is completely new. The new grille, which flows into the standard LED headlights, is wider—forging a visual link between the Tiguan and larger models such as the European Touareg and the Atlas Cross Sport. The new Volkswagen badge is positioned centrally at the front. The eye-catching bumpers have also undergone a makeover.

At the rear, the “Tiguan” lettering is now in a conspicuous central position below the VW badge. The “4Motion” lettering for the all-wheel drive models has also been redesigned. An updated hands-free Easy Open and Close for the power liftgate is available on midrange models. New wheel designs for every trim line round out the exterior changes.

Inside the vehicle, Volkswagen has added a digital version of the new multifunction steering wheel, featuring illuminated touch islands and sliders. An all-new touch module is available for the Climatronic® automatic climate control functions on midrange models. In addition to touch buttons, generously sized and illuminated touch sliders are used for fan and temperature control. The touch buttons can also be used to operate functions such as the newly standard heated front seats, rear window defrost, and to open the air-conditioning menu. Illuminated USB-C ports are located under the air-conditioning module.

The new Tiguan will feature the latest generation modular infotainment system (MIB3), a standard configurable digital instrument panel and the next-gen personalization system. MIB3 offers natural voice control, multi-phone pairing that can easily switch between devices, and wireless App-Connect. Every Tiguan is equipped with the Volkswagen Digital Cockpit, which allows the driver to configure the instrument display. An 8-inch display comes standard, and top trim models will receive a 10.25-inch display. The next generation of personalization systems is included as well, to customize features from driver-seat and mirror settings to driver-assistance system preferences. Rounding out the interior changes—an all-new available 15-color ambient lighting system and new decors for every trim. The Tiguan will continue to offer the 480-watt Fender® Premium Audio System as standard equipment on top trims.

The U.S. Tiguan is powered by an advanced version of the EA888 four-cylinder TSI® engine. This version of the benchmark EA888 four-cylinder, turbocharged direct-injection engine uses an innovative modification to the conventional four-stroke cycle to offer an outstanding combination of power, efficiency, and responsiveness. It incorporates the so-called Budack cycle for improved combustion efficiency. The upshot is 184 horsepower that kicks in at 4,400 rpm and is maintained until 6,000 rpm. Maximum torque of 221 lb-ft is available from 1,600 to 4,360 rpm. All Tiguan models are equipped with a standard eight-speed automatic transmission, and Start/Stop system, designed to help improve fuel efficiency.

The Tiguan takes assisted driving one step further with available Travel Assist. The system can take over steering, braking and acceleration of the new Tiguan at speeds of between 0 mph 130 mph (the driver remains responsible for control of the SUV at all times). To do so, the system uses functions including Adaptive Cruise Control (longitudinal guidance) and the Lane Assist lane keeping system (lateral guidance)—both available in an Advanced Driver-Assistance Package on base models or standard on midrange models. The driver activates the system by pressing a separate Travel Assist button on the new multifunction steering wheel, but must keep their hands on the steering wheel even when Travel Assist is active. Touch detection is a great deal more reliable than steering angle-based systems even on long and very flat stretches of road.

The latest generation of adaptive cruise control (ACC), available on top trims, proactively takes into account local speed limit information, town boundary signs, junctions and roundabouts. For this purpose, the assist system uses the signals from the front camera and the GPS and map data from the navigation system for control.

The normal wheelbase Tiguan goes on sale shortly in Europe. The U.S. will continue to receive the long-wheelbase version, which receives the same design changes and features noted above. The U.S. Tiguan will arrive in Fall 2021 as a 2022 model.

About Volkswagen
Founded in 1955, Volkswagen of America, Inc. is an operating unit of Volkswagen Group of America and a subsidiary of Volkswagen AG, with headquarters in Herndon, Virginia. Volkswagen’s operations in the United States include research and development, parts and vehicle processing, parts distribution centers, sales, marketing and service offices, financial service centers, and its state-of-the-art manufacturing facility in Chattanooga, Tennessee. The Volkswagen Group is one of the world's largest producers of passenger cars and Europe's largest automaker. Volkswagen sells the Arteon, Atlas, Atlas Cross Sport, Golf, Golf GTI, Jetta, Jetta GLI, Passat, and Tiguan vehicles through more than 600 independent U.S. dealers. Visit Volkswagen online at www.vw.com or media.vw.com to learn more.

This information and any vehicle specifications are preliminary and subject to change.

Features and technical data apply to models offered in the USA. They may differ in other countries.

Fuel economy will vary and depends on several factors including driving habits and vehicle condition. See www.fueleconomy.gov for details.

ELECTRIFIED AND ENERGISED: WORLD PREMIERE OF THE NEW TIGUAN

New Tiguan now also available with plug-in hybrid: Tiguan eHybrid1 can reach speeds of up to 130 km/h fully electrically and thus generates zero local emissions
New R model: Volkswagen R has developed the most dynamic Tiguan since the debut of the product line – the Tiguan R1
New all-wheel drive: 4MOTION system with selective wheel torque control lends the Tiguan R a new level of SUV driving dynamics
New infotainment systems: third-generation modular infotainment matrix2 (MIB3) offers the best possible online connectivity for the Tiguan
Wolfsburg (Germany) - The Volkswagen Tiguan is Europe’s most successful Sports Utility Vehicle and one of the top-selling SUVs in the world. More than six million units have been produced to date. In 2019, the Tiguan was again the most popular model of the brand and entire Volkswagen Group, with around 911,000 units produced. Volkswagen is now showcasing a comprehensive update of the best-selling vehicle as part of its world premiere. Ralf Brandstätter who has today been appointed the new CEO of the Volkswagen brand: “We launched our global SUV strategy with the second-generation Tiguan in 2016. It served as the basis for many successful models worldwide. Volkswagen is now taking the next step by electrifying, digitalising and networking the new Tiguan. This will equip the compact SUV to handle the challenges of the modern era.”

All key technology on board the best-seller is set to take a significant step forward. Volkswagen is electrifying the Tiguan with a new, state-of-the-art plug-in hybrid drive. The SUV will now also be available as a separate Tiguan R model for the very first time. Volkswagen R’s performance experts have developed a new all-wheel drive with selective wheel torque control for the extremely dynamic, top-of-the-range model. The so called “R-Performance Torque Vectoring” enables totally new SUV driving dynamics by distributing the drive power variably between the front and rear axles as well as the left and right rear wheels.

Volkswagen’s use of twin dosing now ensures that the turbo diesel engines3 (TDI) in the Tiguan are among the cleanest combustion engines in the world. With the new Travel Assist2/4 system in the Tiguan, the compact SUV is now capable of assisted driving at speeds up to 210 km/h. The Tiguan also applies the most recent generation of infotainment systems (MIB3) to bring a completely new range of online-based services and functions2 on board. Also new: the optional 480-watt sound system by audio specialist Harman Kardon2.

A new steering wheel generation featuring touch controls2 is also among the highlights of the new Tiguan. Volkswagen has also digitalised the climate control functions by means of touch sliders2 and touch buttons2. And last, but by no means least, the Tiguan’s new IQ.LIGHT – LED matrix headlights2 guide drivers through the night with enhanced convenience.

One of the characteristic, new exterior features of the new Tiguan includes the redesigned front end. Klaus Zyciora, Head of Design for the Volkswagen Group and Chief Designer for the Volkswagen brand: “At the front, Volkswagen’s new SUV radiator grille forges a visual link between the Tiguan and models such as the larger Touareg and the Atlas Cross Sport5 sold in North America. It really lends the new Tiguan a significantly more confident appearance.” The bonnet is more concise in its appearance and the new radiator grille with LED headlights is wider, with the new Volkswagen badge positioned centrally at the front. The eye-catching bumpers have also undergone a makeover. At the rear, the Tiguan lettering is now in a prominent central position below the VW badge.

Like its predecessors, the new Tiguan is versatile. It is a genuine SUV capable of towing loads2/3 – a Volkswagen that can handle every motoring situation with aplomb. This is truer than ever, thanks to the new range of drive, assist and infotainment systems on board the Tiguan.

1) The vehicle is a near-production concept car.

4) Assist functions are available within the system limits only.

5) The vehicle is not available for sale in Germany.