The worst is over for global car sales, following the coronavirus black swan that has put an indelible mark on 2020.

With every nation slowly enacting new phases of reopening, the car industry can breathe a sigh of relief, as car sales everywhere pick up momentum after an awful few weeks at near-zero. Fast in bouncing back is Italy’s market, which – although still about 50% down year-on-year – is way up from the April lows that saw it crater by 97.5% from the same month last year. So does this mean we’re back to business as usual? Not quite.

May car sales in Italy grew to a relatively healthy 100,597 units (full stats on Unrae’s website), showing a remarkable recovery even in the midst of a still serious lockdown; “phase 2″ saw government progressively allowing local freedom of movement and reopening of industry and commerce from early May. While this still means only half the size of the market a year ago – when almost 199,000 cars were sold in the same month – it is also a very different picture compared to the measly 4,325 units that made their way to customers in April, or the 28,597 sold in March when the crisis began. This gives an opportunity to see how people are reacting to the new reality we are facing, three months into the evolving health and economy crises.

In April Lockdown, Italy’s Car Market Stares Into The Abyss, But Not BEVs

Traditional powertrains bore all the weight of May’s lost sales in the year-on-year comparison, with petrol and diesel cars down more than 50% from a year ago. The ICE market was already structurally weak before Covid-19, but the current emergency is greatly adding to the pain. Plug-in cars were instead back to healthy figures, something that few in the industry thought could be the case, at least so soon in the year. PHEVs showed the highest relative growth with 1176 units sold (or 1.2% of the market), up 145% from 480 units a year ago; in a market with little love for plug-in hybrids, this was perhaps the biggest surprise. BEV sales were also back to full steam: at 1816 cars sold (1.8% of the market), this month’s performance is the third best result to date in absolute figures, after January and February records near or above 2,000 units. On a YoY comparison, the BEV market is up 54.9% from the 1172 units sold in May last year, when current EV incentives were already in place.

Looking ahead with optimism, we can hope for more good numbers in June as the quarter ends and the economy continues along its slow path back to recovery in a sustainable way. Meanwhile, the Top 10 chart offers some good insights. 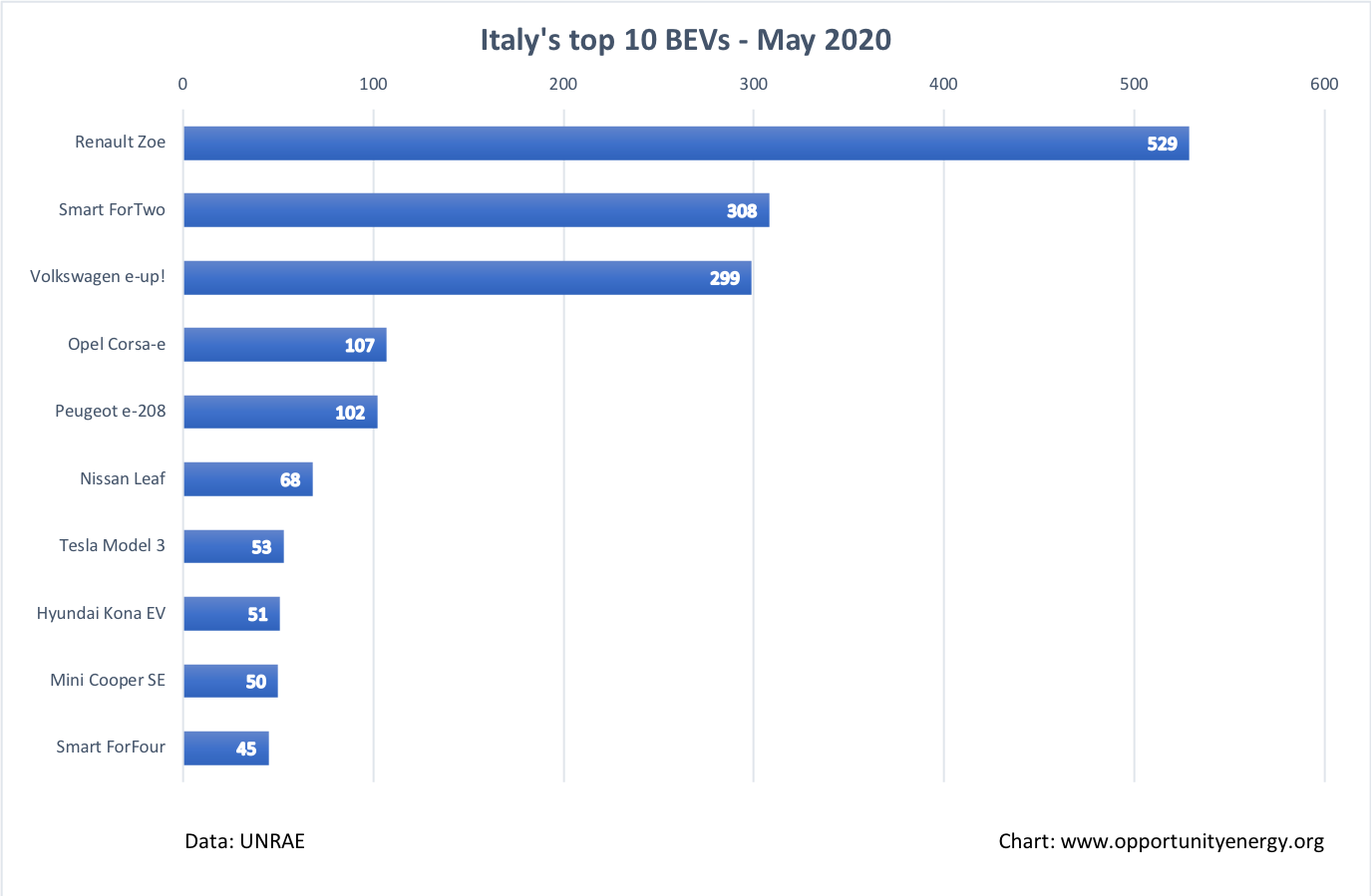 No big surprises this month, as BEVs go back on track for a banner year with a staple of the market in the podium. Renault Zoe leads again pushing 529 sales, the highest monthly sales figure of any full-electric car to date in the Italian market. This number alone is equivalent to almost a quarter of total Zoe sales in Italy in 2019, an incredible performance that makes the French model hard to beat for the top spot this year. Smart ForTwo and VW e-up! complete the podium with 308 and 299 units respectively, showing how strong is the interest in ultra-compact electric cars (and wait till the new Fiat 500e invades its home market in the second half of the year). For the baby VW, note how the battery version now holds a staggering 35% share of its overall monthly sales in the country. Will we see the German mini-car make a similar leap to Smart and go electric-only in the coming months?

Opel Corsa-e (107 units) and Peugeot e-208 (102) are the only other two BEVs achieving three-digit numbers this month. The electric siblings are consolidating their presence in the Italian market, each battery variant reaching a 5.7% share of the respective model’s overall May sales in the country. Higher figures are likely going forward, particularly if Opel and Peugeot decide to capitalise on their technology and tap strongly into growing EV demand. Below the Top 5, Nissan LEAF and Tesla Model 3 follow with less impressive figures (perhaps delayed to end of Q2?), while Hyundai Kona EV, Mini Cooper SE and Smart ForFour close the chart in this month of great recovery.

It’s been a surprisingly short downturn for electric cars in the Italian market. While conventional powertrains are bearing the brunt of the ongoing coronavirus crisis, EVs steal the spotlight and continue on a growth trajectory that is unlikely to be interrupted any time soon. With national governments and EU authorities preparing long-term recovery plans with sustainability in mind, and exciting new electric cars soon available, a truly electric shock is on its way.