The deal with Nel ASA cost $30 million and it will create 5 stations, each of them able to deliver 8 tons of the gas.

One of the main criticisms toward fuel cells is that most of the comes from natural gas. That is probably why the Nikola Corporation decided to have alkaline electrolyzers in its hydrogen stations. We know that because the company announced it bought these electrolyzers from Nel ASA in a $30 million deal. These pieces of equipment will help Nikola generate a total of 40 metric tons of hydrogen per day.

To get more into the details, Nikola bought 85 kW of these alkaline electrolyzers. They turn water into hydrogen, which ensures the gas comes from a renewable source. As for the electricity, Nikola has committed to using only renewable power generation sources, such as solar and wind. Still, what do these 85 kW mean?

A visit to Nel ASA’s website shows that it sells an atmospheric alkaline electrolyzer that has capacities that range from a hydrogen production of 150 Nm³/h to 3,880 Nm³/h. The biggest electrolyzer – called A3880 – produces the equivalent to 17 kW of energy in hydrogen. Five of them total the 85 kW Nikola mentions. 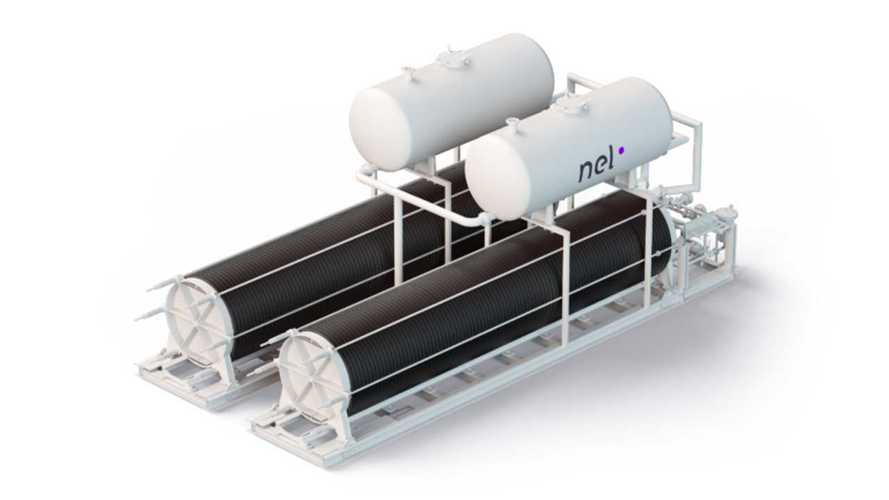 That fits the plans Nikola Corporation describes for these alkaline electrolyzers. The company intends to have five hydrogen stations, each of them producing eight tons of this gas a day. The daily total of 40 tons of hydrogen comes from that.

Nikola does not mention where these stations will be located, but they will probably be close to the company’s major clients. It is interesting to notice that, although it still has not delivered any fuel cell trucks, the company is already preparing the refueling network they will need.

Considering Nikola did not reveal how big the hydrogen tanks will be in the Nikola One and Two, we have no idea what the daily production of these 40 metric tons represents. Will it be enough for how many trucks to run? For how long?

Apparently, the $30 million will be spent solely on these five atmospheric alkaline electrolyzers. Nikola mentions, “the remaining equipment will be covered by a separate purchase order,” but which remaining equipment is it referring to? We will ask the company to make it more clear.

PHOENIX (JUNE 3, 2020) -- Nikola Corporation who becomes publicly traded on June 4, 2020 on the Nasdaq (NKLA), signed a purchase order with Nel ASA (Nel, OSE: NEL), for 85-megawatt alkaline electrolyzers supporting five of the world’s first 8 ton per day hydrogen fueling stations. Together, these electrolyzers may produce over 40,000 kgs of hydrogen each day.

The purchase order has a value in excess of USD $30 million, and the electrolyzers will primarily be delivered from the new electrolyzer mega-factory currently under development in Norway. This purchase order will support Nikola’s five initial stations with 8 ton per day hydrogen production capacity. The remaining equipment will be covered by a separate purchase order that is expected to be finalized within the coming months.

“We are building the largest hydrogen network in the world and I couldn’t be prouder to have Nel part of it,” said Trevor Milton, Nikola Corporation’s founder and executive chairman. “These electrolyzers will support five heavy duty hydrogen stations which will cover multiple states and trucking routes. The future of clean transportation is here, and fleets are lining up to be part of the transition with Nikola.”

The framework agreement was one of the key triggers for Nel deciding to develop it’s alkaline electrolyzer mega-factory in Norway and has enabled Nikola to reserve capacity in the new plant.

“We’re very excited to have reached this landmark milestone with Nikola Corporation. Since our partnership began in 2017, we have been working together to develop a massive large-scale hydrogen fueling station. It’s been amazing to see the significant progress made by the Nikola team specific to vehicle development and the station design, and now we are ready to start building,” says Jon André Løkke, chief executive officer of Nel.

Nikola Corporation is globally transforming the transportation industry. As a designer and manufacturer of battery-electric and hydrogen-electric vehicles, electric vehicle drivetrains, vehicle components, energy storage systems, and hydrogen fueling station infrastructure, Nikola is driven to revolutionize the economic and environmental impact of commerce as we know it today. Founded in 2015, Nikola Corporation is headquartered in Phoenix, Arizona and becomes publicly traded on the Nasdaq beginning June 4th under the ticker NKLA. For more information, visit www.nikolamotor.com or Twitter @nikolamotor.

Nel is a global, dedicated hydrogen company, delivering optimal solutions to produce, store, and distribute hydrogen from renewable energy. We serve industries, energy, and gas companies with leading hydrogen technology. Our roots date back to 1927, and since then, we have had a proud history of development and continuous improvement of hydrogen technologies. Today, our solutions cover the entire value chain: from hydrogen production technologies to hydrogen fueling stations, enabling industries to transition to green hydrogen, and providing fuel cell electric vehicles with the same fast fueling and long range as fossil-fueled vehicles - without the emissions. For more information, visit www.nelhydrogen.com.