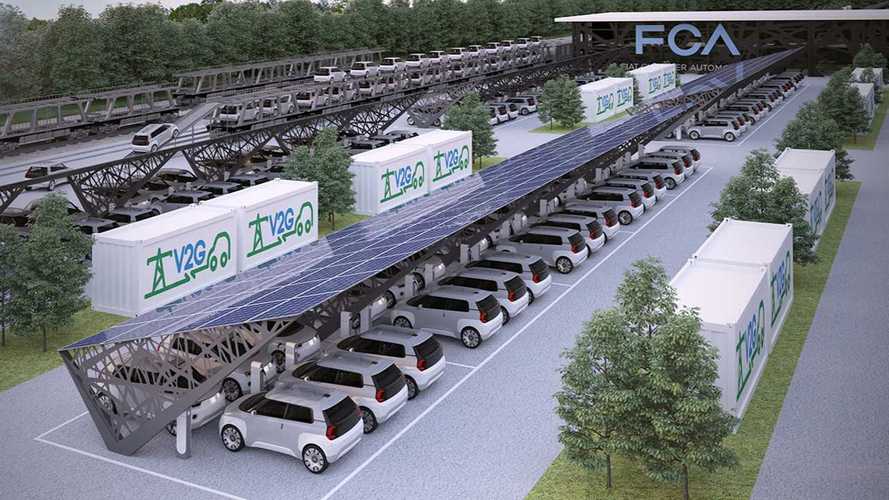 Up to 25 MW of power will be available on-demand (for short periods of time).

Fiat Chrysler Automobiles (FCA) announced that the COVID-19 outbreak has not put a stop on the world's largest Vehicle-to-Grid (V2G) pilot project, announced in September 2019.

Work at the FCA plant in Mirafiori, Italy has begun in partnership with the ENGIE Eps as the technology partner and Terna Group (electricity grid operator).

The goal is to install a bi-directional charging system for up to 700 electric cars by the end of 2021, which will be capable of supplying up to 25 MW of regulatory capacity (on top of 5 MW of solar panel capacity at the site).

In normal operations, cars connected to the system will be recharging, but once the grid needs some help for real-time energy stabilization, electric cars will be ordered to jointly send electricity back. In general, EVs will be able to provide high power for the crucial short periods of time (like several minutes) during the day (typically peak demand or low renewable generation), while the total amount of energy might be fairly small - like several kWh per car we guess.

The station at the Drosso logistics center, within the Mirafiori complex, will have an area of approximately 3,000 m2. The first phase, scheduled for July 2020, includes installation of 32 V2G "columns" for 64 electric vehicles (with an output of up to 50 kW). The V2G charging infrastructure is provided by ENGIE.

The press release does not say anything about the charging standard - CHAdeMO or CCS Combo 2, but we guess it would be CCS. Otherwise, Fiat would have to use CHAdeMO inlets in its cars in Europe, which is hard to imagine.

Anyway, thanks to electric cars and V2G, FCA will build a huge Virtual Power Plant with a power output comparable to the demand of 8,500 homes.

The COVID-19 outbreak has not put a stop to the cooperation between Fiat Chrysler Automobiles and ENGIE Eps, nor to their commitment to support the deployment of electric mobility.

Since the announcement with Terna in September of the intention to jointly experiment with interactions between electric cars and the power grid, based on a ‘smart’ charging infrastructure, FCA has selected ENGIE Eps as the technology partner for the project, to build that infrastructure.

In full compliance with the safety standards to contain the epidemic, work has therefore begun at the FCA plant in Mirafiori, Turin on the first phase of the Vehicle-to-Grid (V2G) pilot project. Once fully completed, it will be the largest plant of its kind in the world.

The initiative is aimed at two-way interaction between FCA full electric vehicles and the power grid. In addition to recharging the cars, the project will use their batteries to provide grid stabilisation services. The vehicle batteries are capable of storing energy and, using the V2G infrastructure, can return it to the grid when needs be. This represents an opportunity to optimise the operating costs of the cars – for the benefit of motorists – and a concrete possibility of contributing to a more sustainable electricity system.

The need for balancing resources in the power grid is expected to increase considerably in the future: on the one hand to support the development of renewable sources, where energy production is by default nonprogrammable; on the other hand, to manage the deployment of electric vehicles, which – given that they require power to be recharged – could further destabilise the system. In the near future, the deployment of infrastructure for intelligent battery management, for example the system under development at Mirafiori, will therefore be a key element in balancing real-time energy demand and production.

V2G technology therefore represents one of the strongest incentives for the spread of truly sustainable electric mobility and a pillar of a rapid energy transition in terms of accessibility to all – resulting in lower CO2 emissions – and in terms of sustainability from the point of view of the electricity infrastructure, where safety and reliability would in turn be increased. The crucial importance of the project served as justification to start its implementation despite the current outbreak.

The construction site for phase 1 of the project is now open at the Drosso logistics centre, within the Mirafiori complex. The works cover an area of approximately 3,000m2 with 450m of trenches already excavated, ready to host over 10km of the cables required to interconnect the electricity grid with 64 two-way fast charging points, with an output of up to 50kW. The centralised infrastructure and advanced control system – providing Vehicle-to-Grid network services in addition to fast charging of electric vehicles – was designed, patented and constructed by ENGIE Eps.

Phase 1 of the project will see the installation of 32 V2G columns capable of connecting 64 electric vehicles and is scheduled for completion in July. By the end of 2021, the infrastructure will be extended to interconnect up to 700 electric vehicles, capable of providing ultrafast grid services to the transmission network operator, as well as recharging the vehicles themselves.

In its final configuration, the project will be capable of supplying up to 25MW of regulatory capacity, making it the largest V2G facility ever built in the world. In addition, by aggregating with other FCA assets at Mirafiori – including 5MW of solar panel capacity – this V2G infrastructure will become a true Virtual Power Plant, indeed the most innovative one in Italy. It will have the capability to provide a high level of resource optimisation to the equivalent of 8,500 homes and a wide range of services to the network operator, including ultrafast frequency regulation.

"The project is acting as our laboratory to experiment on and develop an offering to add value in the energy markets,” said Roberto Di Stefano, Head of EMEA e-Mobility at FCA. “On average, cars remain unused for 80-90 percent of the day. During this long period, if connected to the grid by Vehicle-to-Grid technology, customers can therefore receive money or free energy in exchange for the balancing service offered, without compromising their mobility needs in any way. In addition, this project forms part of a broader context of the technology partnership that has stood between ENGIE Eps and FCA since 2016. The main, tangible objective of this partnership is to reduce the cost of FCA electric vehicle lifecycles, via specific offers exclusive to our customers.”

“During this period of forced immobility in Italy, we are continuing to build the country's future in partnership with FCA, by developing the technology required for the electricity grid to support the deployment of electric cars. At the same time, the project will also help to stabilize the network,” noted Carlalberto Guglielminotti, CEO of ENGIE Eps. “Estimates have it that by 2025, the total storage capacity of electric vehicles in Europe will be over 300 GWh, representing the largest distributed resource available to the European energy system. The market for V2G infrastructure, to date consisting almost exclusively of experimental projects, is now ready to get off the ground. The Drosso project at Mirafiori is a world first. We are confident that it will soon be joined by a solution for all company fleets.”