Tesla Factory during the dawn of a new chapter - a chapter of the Tesla Model Y.

The eyes of the EV world are turned towards Tesla's new investments in production sites in China and in Germany, but let's not forget that the main facility is the Tesla Factory in Fremont, California.

Tesla produces in California all of its cars: Model S, Model X, Model 3 and already the Model Y (soon to be delivered), in a volume unmatched by any other factory in the world. The site (formerly operated by GM and Toyota as NUMMI) was multiple-times expanded and upgraded over the years, including installation of heavy-duty tents.

Tesla expects that this year it will comfortably exceed 500,000 electric car sales.

Map of the facilities at the Tesla Factory in Fremont, California 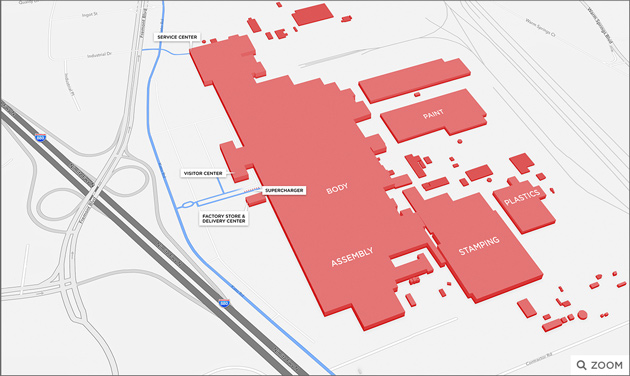 Tesla's description of the factory:

"Tesla’s factory in Fremont, California is one of the world’s most advanced automotive plants, with 5.3 million square feet of manufacturing and office space on 370 acres of land. Following the City of Fremont’s approval of Tesla’s expansion plans in 2016, the company will nearly double the size of the facility to almost 10 million square feet, creating thousands of new jobs in the coming years.

Today, more than 10,000 employees work at the Fremont factory. Prior to Tesla, the facility was home to General Motors from 1962 to 1982, then GM and Toyota’s New United Motor Manufacturing, Inc (NUMMI) from 1984 until the partnership ended in 2009. Tesla purchased the facility in 2010 and extensively remodeled it before the first Model S rolled off the line in June 2012. To brighten what was once a dark, enclosed space, Tesla added skylights to provide workers with natural light and painted the floors with white epoxy to create a clean work environment. The facility also features an employee training center, cafeteria and food trucks, gym, 24/7 in-house medical center, and outdoor patios.

As one of the largest manufacturing employers in California, Tesla stimulated $5.5 billion in sales activity and generated $4.1 billion in direct spending in the state in Fiscal Year 2017 alone. The same year, Tesla also created 51,000 jobs in California, including our employees and jobs throughout our supply chain. To support the ramp of vehicle production, Tesla is focused on ensuring its workforce is trained in the advanced skills unique to Tesla’s production processes, while taking a proactive approach to safety. The result is that while production has increased, we’ve also seen our safety record improve dramatically.

As Tesla continues to deliver more and more vehicles to customers around the world, we always aim for the highest possible level of vehicle craftsmanship, with every Model S, Model X and Model 3 built in Fremont, where the vast majority of the vehicle’s components are also made."