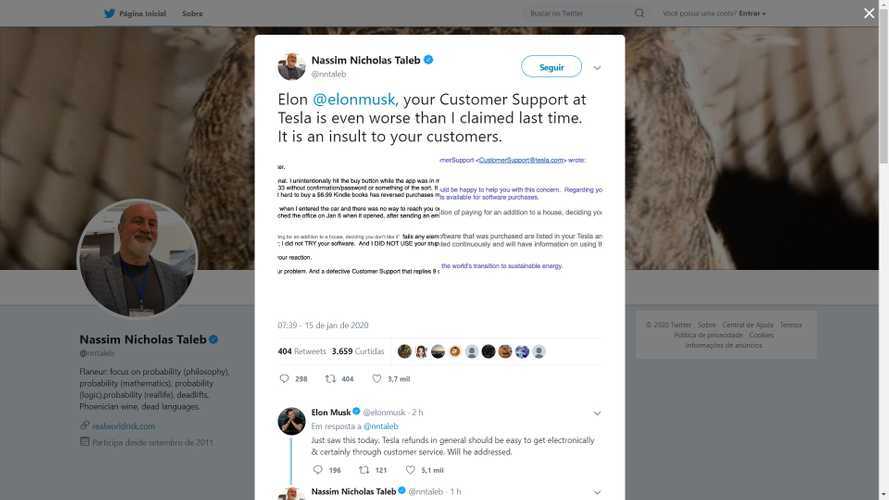 “The Black Swan” and “Skin In The Game” author was not happy with the customer service response.

Elon Musk must read Nassim Nicholas Taleb’s books quite often. Once, he said that, if Tesla went bust, he would as well. There is nothing more “Skin In the Game” than this. That is the title of one of Taleb’s most famous books. That is probably why the Tesla CEO gave Taleb such a quick answer to a complaint related to the company’s Customer Service. We’ll get to that in a bit.

Taleb accidentally bought $4,333 in software and got in touch with Tesla to get a refund. According to the author, it was due to a “butt dial.” He could not ask for a refund on the app in which the purchase inadvertently happened. When he went to a Tesla office to ask for a refund, Taleb had to wait eight days to get an answer. And it was “no.” Well, a little worse than a simple no. You can see it below.

In a tweet, Taleb exposed the conversation, mentioned Elon Musk, and called the response “an insult” to Tesla customers. He also said that “Customer Support is even worse” than he had previously mentioned.

A couple of hours later, Musk published this tweet:

Taleb was not satisfied with that.

That was sympathetic. Not only to other consumers facing problems with Tesla products, but we dare to say also with journalists that try to get answers from the company and are left hanging. We’re still waiting for Tesla to reply on a variety of issues, the most recent being its goodwill repair policies.

What follows their conversation is a bunch of Tesla clients reporting similar issues. As usual, there are also short-sellers trying to make that look like Tesla is a complete fraud and Tesla die-hard supporters making the usual FUDster claims no one else takes seriously but themselves.

Would Musk have replied if it was a typical customer complaining about the same problem? Perhaps if they were just a few, as they used to be in the early days of the company. With Model 3 sales numbers, and Chinese customers ordering more and more units, that would probably be impossible.

Anyway, unhappy Tesla clients must be thankful to Taleb. The author of “The Black Swan” reminded Musk that he might not be able to answer personally to each tweet, but that is no excuse for the company not to have someone that does. Preferably without contractor metaphors and with a bit more empathy.