There's no way Tesla will send its only Cybertruck to Ford though.

Ford has reached out to Tesla asking for a Cybertruck so that it can perform a real towing challenge using one of its F-Series trucks. Will Elon Musk bite?

According to Ford, the towing test demonstration that Tesla showed at its Cybertruck reveal was more of an apples to oranges comparison, rather than apples to apples. We noted some of these issues in our original coverage of the towing demonstration.

Elon Musk has now responded saying "bring it on." See the tweet below:

***UPDATE: Ford has commented on this matter. We've paraphrased the comment below:

“A senior Ford spokesperson told InsideEVs.com that Madra’s tweet ‘was tongue-in-cheek’ and meant to point out the absurdity of Tesla’s tow video.”

Now, it seems Ford is onto it too and, as such, as keen to set up a more realistic demonstration. In an apples to apples tug-of-war towing test, the Ford would employ 4WD, like the Cybertruck does, and would have to be fitted with similar tires. The towing demonstration shown by Tesla was clearly not an accurate demonstration of the abilities of both trucks. It was skewed to favor the Cybertruck.

We don't really expect Elon Musk to accept this challenge, as we believe only once working Cybertruck exists right now. However, in the future, when the Cybertruck is more readily available, you'd better believe that Musk would be all in for this sort of showdown.

Regardless of the acceptance of this challenge or not, Musk has caught the attention of Ford with his Cybertruck and that's the point. So, again, it's a win for Tesla. 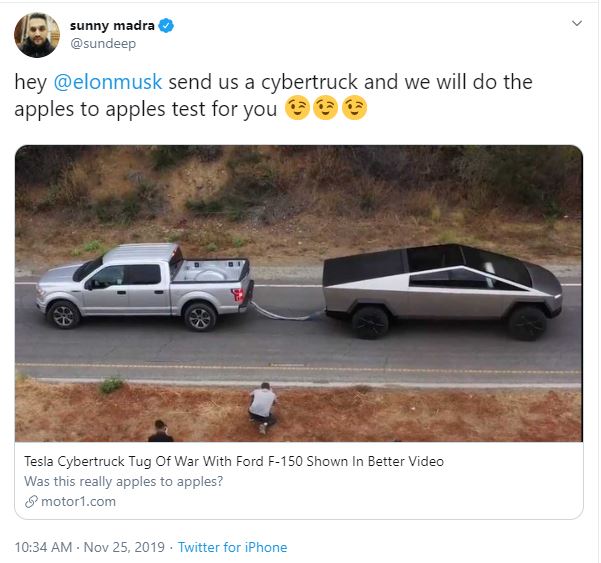 In this role within Ford Smart Mobility, LLC, Madra ensures Ford is continuously discovering and actively incubating new business models. His responsibilities include the Ford X subsidiary, Autonomic, and the Ford X business incubator and accelerator.