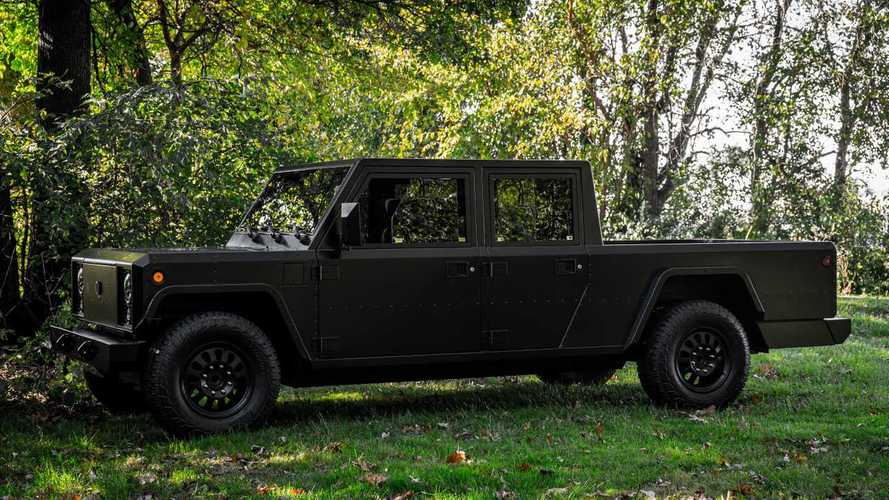 Both the pickup truck and the SUV have the same starting price.

Bollinger decided to cut the suspense around how much its vehicles are going to cost. What we did not expect was that the B1, its SUV, and the B2, its pickup truck, would have the exact same starting price. Both will require $125,000 for all each of them can offer. And that is pretty much being electric and extremely able on trails and other off-road situations.

Live Video Coverage From Bollinger B1, B2 Reveal Event
⠀

The impressive thing about the pickup truck is that, with its liftgates open, it will be able to carry 19’4” long objects. The SUV also has liftgates, but for 16.4” objects only.

Gallery: Bollinger B1 And B2 Electric Trucks/SUVs

That said, it would be only logical that the B2 cost more than the B1, even if very little. If we can give our two cents, the company probably thinks it is not a good strategy to restrict demand due to price differences. We are also curious to see: with the same starting price, which of them will have more demand?

Both the B1 and the B2 will have a 120 kWh battery pack, for a total range of 200 miles according to the EPA cycle. The company estimates they will be rated at 70.2 MPGe.

Regarding charging, Bollinger vehicles have a J1772 port and take ten hours to recover all juice from a 220V outlet. Fast charging happens with a CCS port and takes 75 minutes.

Being pretty basic vehicles, without airbags, why would anyone pay $125,000 for any of them? The company had already warned they would not be cheap, and it still did not mention extras that could make that price even higher.

We guess that they want to keep the production of the all-aluminum body as a handcrafted work for as long as possible. And that people will still want the vehicle in enough numbers to keep them busy indefinitely.

That would allow the company to make money for investments in a robotized production in a sustainable way, without much debt in the process. Besides, both the B1 and the B2 would have a very exclusive status. With greater demand than output, they could even become “appreciating assets.”

Elon Musk once referred to Tesla cars when they have full autonomy capability like that. The difference is that Bollinger would not have to offer anything extra for that to happen. People willing to buy a B1 or a B2 would have to wait months or to have a used one, which would probably cost more than a new. That is what happened for years with Morgan, for example. And to other artisanal carmakers.

As deliveries will only start in 2021, we are way ahead of ourselves in what relates to sales. Bollinger is taking $1,000 deposits for the cars anyway, probably to fund production. What we can say is that its vehicles offer off-road characteristics that can make them really desirable.

Bollinger cars will have an electronically controlled and self-leveling suspension with 10” of travel. The ground clearance will be of 15”, manually adjustable to be at 10” or 20”. The rear and front motor are electronically linked for full-time all-wheel-drive, and both offer electronic locking differentials.

The cars will have a two-speed Hi/Lo gearbox with neutral for flat-towing. The gearbox offers 11.4:1 gear reduction ratio in high range and 22.5:1 in low range.

The company is yet to release approach, departure, and break-over angles, as well as wading depths. Still, the all-aluminum body and the proposition to make these vehicles last forever will undoubtedly attract a lot of attention among off-road enthusiasts. Bollinger bets many of them have $125,000 to spare.

Bollinger Motors Announces Pricing for B1 + B2 Electric Trucks

FERNDALE, Mich., October 24, 2019 -- Bollinger Motors announced today its
suggested retail price for the Bollinger B1 Sport Utility Truck and the B2 Pickup Truck.
The all-electric, all-wheel-drive vehicles will have an MSRP of $125,000.

"We’re going to production with all of the components and features that our team
developed from the start; we’re staying true to our DNA” says founder Robert Bollinger.
“Our trucks deliver a level of performance unlike anything on the market or coming to
market.”

Targeting low-volume production, Bollinger Motors will build both the Bollinger B1 and
the Bollinger B2 in the U.S. Production will start in 2020 with first deliveries slated for
2021. The trucks will be sold and serviced through independent dealers throughout the
U.S. and globally.