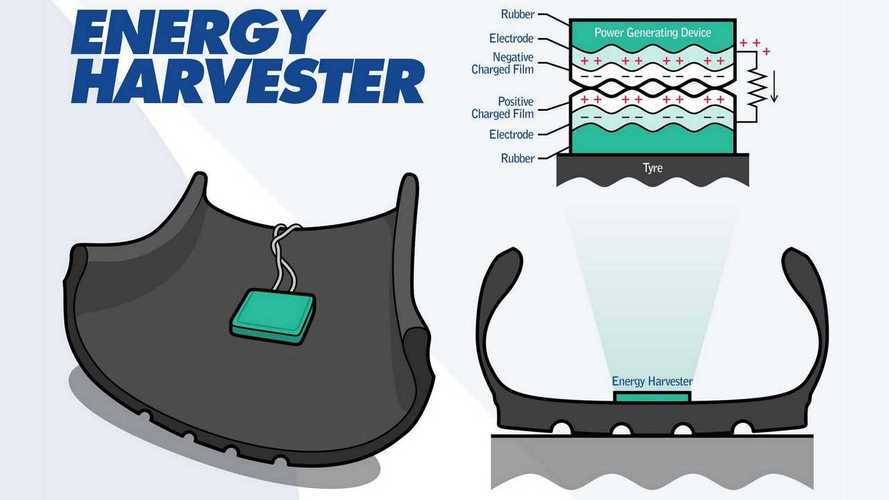 An Energy Harvester will seize static energy to feed some car systems.

Electric cars are all about energy efficiency. So it is more than natural that they have energy regeneration and try to have alternative and renewable other sources of juice. So much so that we now have solar electric vehicles – such as the Lightyear One – and suspensions that also produce electricity. Well, Sumitomo Rubber now wants its tires to do the same and created an “Energy Harvester” to collect their “frictional charging”.

The research from Sumitomo Rubber – better known for its Falken tires – is being conducted in partnership with the Kansai University, from Osaka, Japan, and the professor Hiroshi Tani.

Instead of collecting the static electricity that regular tires already produce, the idea is to create tires that generate it actively whenever they suffer any sort of tread deformation when moving.

According to the images provided both by Sumitomo Rubber and its Falken division, the Energy Harvester is a small box put inside the tire. It is composed of rubber, electrodes and two charged films, a positive and a negative one.

It is very likely that, when the tread deforms, it makes the basis of the Energy Harvester move and produce the “frictional charging”, which is then conducted to whatever this energy is going to power by two wires. Sumitomo suggests the TPMS, for example.

We have no idea about how many Energy Harvester can be placed in each tire. Nor about how they can affect tire balance.

Perhaps the current box is only a stage before the company can integrate an Energy Harvester to the whole interior of the tire. Perhaps airless tires will make that even easier by integrating these films and electrodes into the structures that will keep the tread in touch with the ground.

What we know at this point is that tires can contribute more to a car than by simply making sure it does not lose grip. They can also give back a part of the energy the car spends with their rolling resistance.

July 23, 2019
Sumitomo Rubber Industries, Ltd. is pleased to announce that, through joint research undertaken with Professor Hiroshi Tani of Kansai University, we have developed a new technology to generate electric power from the rotation of a tire, which is accomplished by installing a power generating device (Energy Harvester) inside of a tire to convert static electricity occurring within a tire into clean energy. This new device takes advantage of a type of static electricity called frictional charging to generate electric power efficiently each time a tire's footprint deforms as a tire rotates. We believe that this technology holds great potential for practical applications as a power source for various automotive digital tools.Having launched our "SMART TYRE CONCEPT" as a new tire technology development concept that aims to respond to the sweeping changes now occurring throughout the automotive industry by realizing "Ever Greater Safety Performance" and "Ever Greater Environmental Performance," Sumitomo Rubber Industries has been working to introduce new automotive solution services that take advantage of a wide range of data obtained using various digital tools.
We are confident that the results of this latest research will lead to practical applications for this new technology as a power source for sensors used in TPMS (Tire Pressure Monitoring System) and other automotive devices, contributing to the creation of future services that make use of various digital tools without any need for batteries.
Further, in October of 2018, this research theme was selected by the Japan Science and Technology Agency (a national research and development agency) as a Type FS* Seed Project under A-STEP (Adaptable and Seamless Technology Transfer Program through Target-Driven R&D). Moving forward, we will continue working to advance this research with support from the Japan Science and Technology Agency.
*A program supporting research and development projects undertaken jointly by academia and enterprise in order to perform feasibility and application studies based on the results of academic research related to technological "seeds," with the ultimate aim of producing new core technologies.