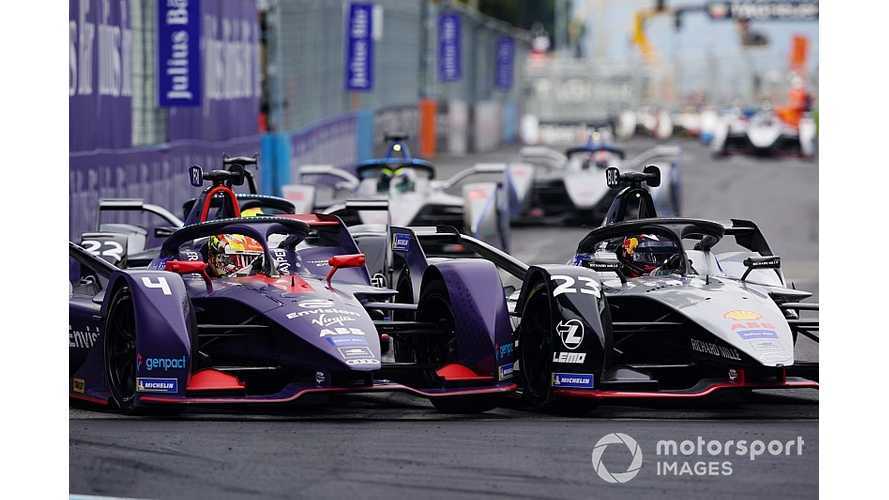 A new system designed to prevent a 'demolition derby' made its debut last weekend and the idea of a yellow card warning for bad behavior has made an immediate impact in correcting the course.

"The racing was good, people loved it. Nothing silly happened, which is what we want to see." That was the assessment of ABB FIA Formula E championship leader Jerome D'Ambrosio following last weekend's event in Rome.

It was a race of notable high-quality, the first lap aside, filled with intrigue and a close fight for the win. But it could all have been so different had something 'silly' come to pass.

When Jaguar's Mitch Evans made what would go on to be the race-winning move on DS Techeetah driver Andre Lotterer, he exploited a better run out of the Turn 10 right-hander to get his car alongside his rival's going into the upcoming first chicane at Turns 11/12.

Now on the inside, Evans had the advantage, but Lotterer, understandably, refused to back down. They ran side-by-side into the corner, coming together at the apex of the first element of the chicane.

From Evans's onboard camera, being broadcast live on the world feed, Lotterer's nose stayed alongside, then disappeared suddenly, as if his left-front wheel had snared the wall that had been rapidly approaching on the outside.

A sense of deja vu set in: 'Here we go again, another FE race winner under investigation, will the outcome - which will inevitably be Evans losing his and Jaguar's maiden category victory - be known before midnight?'

But as it turned out, none of that came to pass. Lotterer had backed off as Evans made contact on the inside, the Jaguar's left-front striking the DS Techeetah's sidepod. In doing so he just kept his car out of the wall, Lotterer's right-front then hitting Evans' left-rear - although it's hard to see how the triple Le Mans 24 Hours winner could have done anything else given the utter lack of room available.

Brilliant, breathtaking, controversial. At no point are Evans's front wheels alongside Lotterer's, as one might expect, in say Formula 1, for a driver to claim to have won a corner.

But his better exit from the previous turn meant Lotterer could not just run him into the wall and Evans had earned the right to stay on the inside.

With contact made, twice, this was the first test of the FIA's new approach to being stricter with FE driver clashes, which was revealed on the eve of the race.

Part of that was a verbal warning option granted to FE race director Scot Elkins, who now has more approaches available to intervene if he spots behaviour he doesn't like.

Anything immediately serious will be reported to the stewards, as usual, but Elkins can now decide to radio the teams of the drivers involved and say that any further clashes will result in an investigation.

If sanctions have been earned, the FIA now expects its stewards to evoke the harsher options of what they have available.

" to calm down a little bit the bad feeling people started to have on having too much 'touring car behaviour' and not enough 'single-seater behaviour'," FIA circuit championships director Frederic Bertrand explains.

"We want to bring back some reconsideration on some sanctions and penalties. The same type of mistakes will have a different penalty.

"We increase communication between our race director and the teams, so that in case we see behaviour that he doesn't like, he will be able to really inform them have a warning system. On top of this be able to report to the stewards as usual that we don't like in case the is too harsh in the beginning and it can go straight to the sanctions.

"But still there is a potential yellow card system, which could work."

Given the significant increase in the amount of contact in FE races this season, a move aimed at decreasing it was understandable. The idea was explained to the FE team managers and then the drivers in separate briefings on the day before the race.

But some in the paddock were still unsure how it would work ahead of the action starting. With the Evans and Lotterer warnings, the limits are (hopefully) now defined.

"The racing was fair with Mitch," Lotterer said afterwards. "Obviously we had contact but in FE you can't avoid contact. It's quite tight out there and we did defend and try.

"I tried to hold on and he had the nose in so we came into the corner together and it's inevitable that there is contact. But he left my space afterwards so I didn't hit the left corner in the chicane. So, fair enough about the warnings, we can engage a little bit in what we can and cannot do. It's part of Formula E, a bit of rubbing."

But what if the contact had been replicated? Would they both have received identical penalties? Which, we can assume, would have been a drive-through (worth 37 seconds in Rome). That would have dropped them out of the top 10 at the flag, with Stoffel Vandoorne taking a maiden FE win for HWA, moments before his Venturi powertrain suffered another driveshaft failure.

This is something the FIA will need to clarify ahead of the upcoming race in Paris. Its initial move to be stricter should be welcomed, but it has come with some grey areas. The reason the governing body felt it had to act - in addition to the driver and team boss complaints, and headlines and columns stemming from the contact-fests that had been most of the previous 2018/19 events - was because of the 'robust' nature of the Gen2 car.

Part of the consideration for the new machine involved making it stronger overall. The Gen1 car it replaced had pod-like pieces of bodywork behind its rear wheels. When struck, these tended to come loose or fall off, which would mean a driver was forced to pit to get them fully removed or made safe, even if they were the innocent party in a clash.

"In general, season five was a year where we knew that we would discover things along with the races with a new car," says Bertrand. "One of the things we discovered is that the car is very strong, it's very robust. The standards we had during the last four years were all satisfying. We realised that the new car allows too much contact without having any self-punishment for the drivers.

"So we have to interfere and to act. In the first races, we discovered that problem and then the agreement is that we have to bring back our standards to something which corresponds to that new standard of car."

In Rome, this new approach contributed to a thoroughly brilliant race. There was close racing for the race lead and in the pack behind, with noticeably fewer clumsy moves ending in disaster.

It's worth pointing out that the race was much more of an energy efficiency test than in recent races this season. That in itself contributes towards lower levels of contact - ideally, not because passes are rendered simple, but because the driver defending can't react by overdriving.

This is what the drivers want, and they still want the FIA and FE to take steps to ensure efficiency becomes key at every race. Part of that is now in place, with the teams agreeing to an FIA proposal to stop the race clock under red flag conditions.

This is also to simplify things for watching fans, as the race director was previously adding time back on once the racing got back under way. Whether the governing body will go further and add freezing the clock under full course yellows and safety cars isn't clear at this stage.

"That's not something that we've had a detailed discussion about at this point," says Jaguar team boss James Barclay, who is also the chairman of the Formula E Teams and Manufacturers Association (FETAMA).

"The decision to do it under red makes sense. Let's see the next steps. There's talk that we have a race plan that works really well now, so it's not about massive change, it's maybe about small tweaks and changes. Stopping the clock under red is a good example of a small change, Let's see how that's played out - and I think it has played out effectively, fundamentally.

"So for next steps, careful consideration before we make anything kneejerk, but I think Formula E has shown it's not beyond putting exciting race formats together and so let's see if there's an improvement again we can make there."

Despite the FIA getting tough on ham-fisted contact between drivers, some problems remain. There appeared to be a massive amount of contact on the opening lap in Rome.

Even before Jose Maria Lopez and Sam Bird had clashed at the track's first chicane, and the Dragon driver had then crashed by himself at the second, triggering the race's lengthy red flag, Daniel Abt had hit Gary Paffett three times in the first two corners.

This is another example of a lack of consistency that the FIA needs to address. But the red flag pile-up chaos wasn't caused by poor racing standards and was merely a result of the track's narrowness at that particular point.

Ultimately, the FIA deserves credit for stepping in and taking a proactive approach to something that had become a major negative note in FE races. But it must remain consistent when it comes to the penalties that will inevitably be dished out in the future.

Overall, the high quality of the Rome race suggests that the governing body's move has had a positive effect. Now the upcoming events need to provide more evidence to prove that theory is correct.