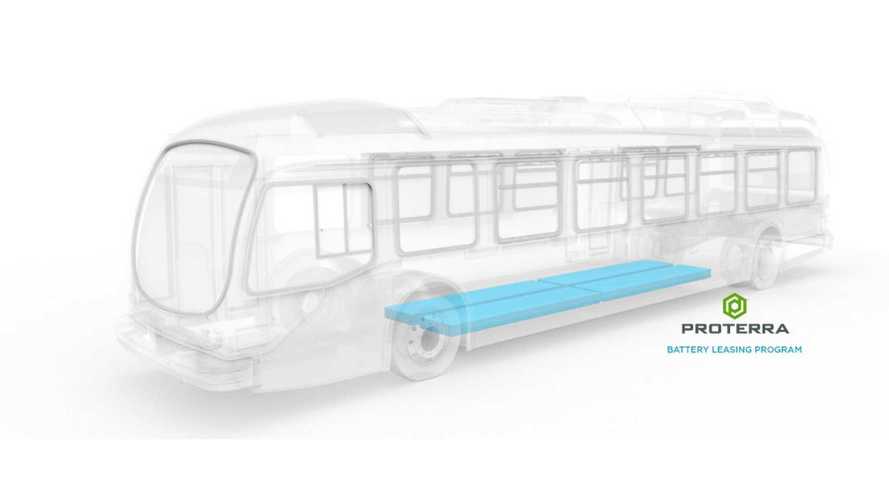 Upfront costs to be lowered to the level of diesel buses

Proterra announced a new partnership with Mitsui & Co., a Japanese investment and trading company, to create a $200 million credit facility in support of a battery lease program.

The idea of the battery lease program (separate to the rest of the vehicle) is already known (in the case of cars it was mostly pursued by Renault), and it's set up to lower upfront costs of the buses to the level of comparable diesel buses, which allows transit agencies to purchase EVs easier. For Proterra, on the other hand, higher sales would enable a scaled up business.

Separate battery leasing probably will be much easier to use in the case of fleet customers than in the case of private electric cars, because fleets look at the total cost of ownership over a longer period of time.

Proterra offers a deal for 12-years of use of the battery, with a guarantee on the performance of the batteries through the life of the bus.

"The battery leasing credit facility, the first of its kind in the North American public transit industry, is expected to lower the upfront costs of zero-emission buses and put Proterra electric buses at roughly the same price as a diesel bus.

Proterra's approach to batteries already envisions second-life use of the batteries after the end of their useful life in a vehicle. The packs are technically ready for simple removal and integration in energy storage systems.

"In addition to the battery leasing initiative, Proterra and Mitsui have established a program to use batteries from the leasing program in secondary applications after the end of their useful life in a vehicle. Proterra’s E2 battery packs are designed with secondary usage in mind, with simplified integration for easy removal and a form factor that enables repurposing."

“We’re seeing innovation both in technology and in businesses around the mobility sector. We are pleased to take an initiative to support the transit industry alongside Proterra, as the company expands its battery lease program to enable the rapid adoption and a broader commercialization of its electric buses. There is a unique opportunity for markets to provide the necessary capital to accelerate the imminent transition to 100 percent battery-electric bus fleets and reduce carbon emissions.”

“This first-of-its-kind credit facility for public transportation marks a significant development in our evolution to make innovative heavy-duty electric vehicle technology accessible through innovative financing models. Mitsui’s continued support as a trusted partner for this facility will serve as a foundation for the Proterra battery lease program to expand and allow transit agencies across North America to bring clean, quiet transportation to their communities.”

"In 2015, the Fixing America’s Surface Transportation (FAST) Act specifically authorized the ability to lease batteries separate from a vehicle. Since then, more than a dozen Proterra customers, including Park City, UT and Moline, IL, are already using or have agreed to use the battery lease program. Park City, UT was the first customer to enter into a battery service agreement with Proterra for a fleet of six Catalyst buses that were funded as part of the 2016 Low or No-Emission Bus Program. Park City plans to lease batteries for its next set of seven Catalyst vehicles in pursuit of its long-term goal of going 100 percent electric.

“We’re thrilled to have been the first to take advantage of Proterra’s innovative battery service agreement in an effort to bring more electric buses to Park City,” said Park City Mayor Andy Beerman. “There is no reason for us to buy bus batteries from this point on.”

Proterra has long been a leader in offering flexible financing options to lower upfront costs of an electric bus to be competitively priced against diesel buses. In addition to battery leasing, Proterra established a bus leasing program, which allows customers to pay for the use of a bus over time, with the option to permanently transition the bus into a fleet at the end of the lease term. Currently four customers are taking advantage of leasing buses, including Jones Lang LaSalle in Chicago and Metropolitan Transportation Authority in New York."