Preparing for electrification in Europe, Ford is developing a smart algorithm that would help to identify the most beneficial places to install charging stations.

Ford is using driving data from more than 1 million kilometers in the UK. The company fitted 160 connected vans with devices to record journey data and collected more than 500 million data points, from more than 15,000 days of vehicle use.

"Data scientists at the company have developed an algorithm, based on more than 1 million kilometres of driving data and including where vehicles actually stopped, to pinpoint the places that could help drivers integrate charging within their operating patterns, rather than making special journeys to out-of-the way locations.Following in-depth analysis in Greater London, the team concluded that it would be possible to significantly improve access to on-the-go charging through deploying a relatively small number of strategically positioned rapid-charging stations."

“Being able to harness, analyse and leverage the huge amounts of data that is available through existing vehicle use can make a real difference to how easy we find it to get about in the cities of the future,” said. “We at Ford are committed to delivering smart vehicles for a smart world – including electric vehicles that will contribute to cleaner, quieter towns and cities. But we also want to try to use data to help improve investment efficiency into the necessary infrastructure to support that approach.” 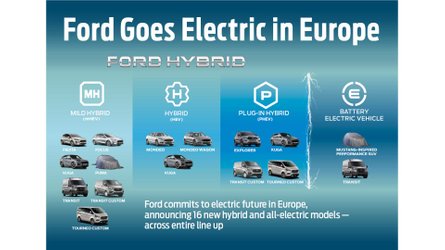 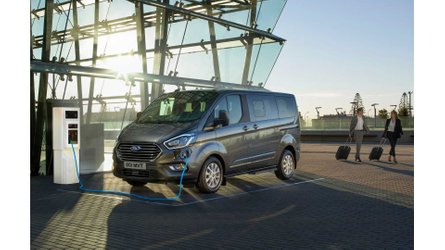 The fleet of 20 Transit Custom Plug-in Hybrid tested in London also brings interesting results as the series-hybrid on average operated in all-electric mode for 35% of the time (45% in Greater London and 68% in central London).

Over 80,000 km (4,000 km per vehicle on average), "no use of public charging facilities was observed", which sounds reasonable as there was no requirement to recharge the series-hybrid, and it's not equipped for DC fast charging. The public charging is more important for all-electric cars.

However, the other result of low average state-of-charge when starting the day - of just 45% - seems worrying to us. It seems that closer to 100% after overnight charging would significantly increase the all-electric mode operation during the day from the current 35% to maybe 70%?

"During their trial – based on 80,000 kilometres of PHEV fleet mileage – no use of public charging facilities was observed. Vehicles were instead charged either at depots or at home. Furthermore, on average, vehicles started the day with only 45 per cent charge, underlining the value that charging points en route could add. It was also found that operators became more adept at effectively charging vehicles, predominately at their depots, as time went on."

As part of its far-reaching Ford City Data Solutions Report, published in December 2018, Ford fitted 160 connected vans with a simple plug-in device to record journey data. * With the consent of participants, this generated more than 500 million data points, from more than 15,000 days of vehicle use, that was sent to the cloud for analysis.

It was from this data, captured over an eight-month period, that Ford’s Global Data Insight and Analytics team were able to identify where charging points would be most useful to a fleet. Although the vehicles in the trial were not electric, it was possible to understand their operation and forecast their ability to access charge points as if they were.

By seeing where vehicles travelled, where they parked and for how long, they could identify ways in which charging could be integrated within regular journeys, especially for businesses whose drivers might make multiple stops, for example, to make deliveries. It is an approach that Ford envisages could be extended to further cities, the data coming from connected vehicles, and enabling those cities to more effectively plan how to spend their infrastructure budget.

From a separate London fleet trial involving 20 Transit Custom plug-in hybrid electric vehicle (PHEV) vans, Ford also found that fleets operated in pure electric mode for 35 per cent of their time on the road, increasing to 45 per cent in Greater London, and to 68 per cent in central London.

The Transit Custom on sale this year will be the only hybrid in the one-tonne van class, to be joined by the plug-in Tourneo Custom eight-seat people carrier.

During their trial – based on 80,000 kilometres of PHEV fleet mileage – no use of public charging facilities was observed. Vehicles were instead charged either at depots or at home. Furthermore, on average, vehicles started the day with only 45 per cent charge, underlining the value that charging points en route could add. It was also found that operators became more adept at effectively charging vehicles, predominately at their depots, as time went on.

Rapid-charging stations can provide up to 80 per cent battery charge in 30 to 40 minutes. There are now more than a million electric cars in Europe and it is expected that worldwide, electric vehicles will account for the majority of all new car sales and a third of all fleets by 2040. But there are already concerns around a shortfall in the provision of charging points.

Previously, Ford announced how big data could help make cities safer – by highlighting where future traffic incidents might happen. And the company last week revealed an extensive range of new vehicles under a new Ford Hybrid banner. The comprehensive line-up of 16 electrified models announced in Amsterdam will cover everything from small family cars to SUVs and people movers – with a Mustang‑inspired performance SUV and fully electric Transit van on the way. Future all‑electric vehicles will be supported by the IONITY consortium that aims to build 400 stations in key European locations by 2020.

“Electrification changes the way we drive – and refuel – our vehicles. We realise that charging time and behaviour are fundamentally different for electric vehicles compared with traditional models, where refilling with petrol or diesel may take only five minutes,” said Scott. “In locating these additional charging points, we’ve attempted to take into account regular driving and stopping patterns so that topping up slots into drivers’ regular day-to-day activities.”

* Participants gave consent for their data to be collected and analysed and were invited to take part in the research through large fleet owners. Independent owner operators were recruited for the trial through a third-party service provider.