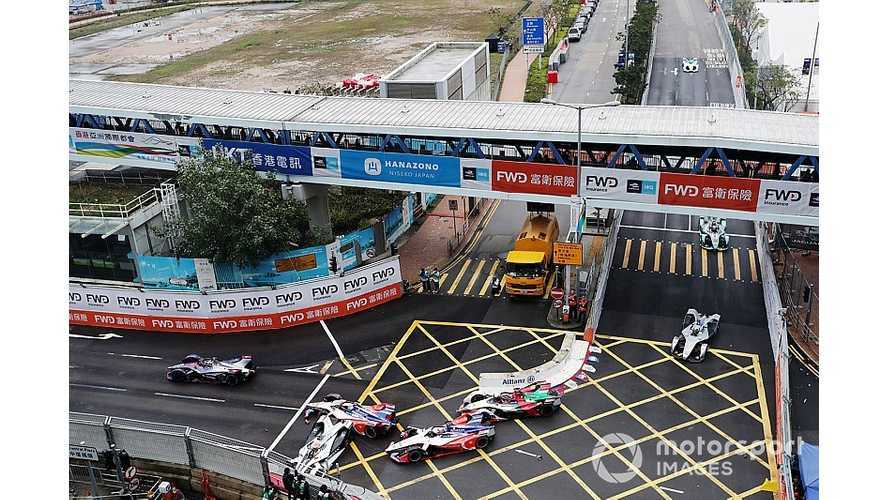 Formula E has had six races this season, and none have disappointed thanks to an ideal format that promotes close racing. But one factor threatens to sour the show unless the FIA clamps down on it.

There was a moment in last Saturday's Sanya E-Prix where there was a possibility that the driver running in fourth, Andre Lotterer, would finish in that position and yet win the race.

This was because the drivers ahead of him - his DS Techeetah team-mate Jean-Eric Vergne, Oliver Rowland and Antonio Felix da Costa - were all being investigated for possible driving infractions.

There was a very real chance that, for the second race in a row, the on-the-road winner would lose the in victory in the aftermath. In the end, this didn't come to pass - and in the case of Rowland and da Costa, only one would surely have been penalised for their clash had the stewards decided that further action was necessary. But it serves to highlight a problem that has arisen in ABB FIA Formula E this season.

And it's one that actually stems from the championship's greatest strength. Competitive racing has always been a feature of the electric series. In the beginning, back in 2014/15, this could be explained by all the teams running an identical car, but even in the ensuing campaigns, the gaps between the powertrains have not been massive. Even when Renault and then Audi produced dominant packages, the racing didn't massively suffer.

The spec aerodynamic policy FE rigidly - and rightly - enforces also helps produce enthralling racing, as it allows the cars to run close together. This has become more intense in the current campaign thanks to the rule changes that have been working so successfully: the championship order qualifying groups, attack mode and the 45-minute-plus-one-lap race format.

It's the group qualifying change that has had the most influence in increasing the intensity of the racing, as the fastest cars and drivers are now regularly starting down the field. But what has served FE so well so far in its short history is now under threat.

There has been a noticeable increase in needless contact so far this season and that goes hand-in-hand with an increase in investigations and penalties. And with penalties come arguments about sanctions being consistently applied - particularly, and understandably, from the drivers.

The chances for result-changing penalties, which irk fans, increase too. The season opener in Saudi Arabia was largely free of on-track clashes - although DS Techeetah lost a certain one-two due to penalties for a complex technical infraction, an issue for another day.

But, starting in Marrakech, every race since then has featured some form of clumsy contact. Even before the BMW Andretti drivers collided at the front in Marrakech, Lucas di Grassi had punted Wehrlein into retirement at the first corner as the pack took avoiding action around the needlessly spinning Vergne.

In Santiago, Lotterer, da Costa and Vergne clashed, and the lightest of touches between Alexander Sims and Edoardo Mortara looped the Venturi driver around in the closing stages.

At Mexico City, Vergne was again in the wars, this time with Jaguar duo Nelson Piquet Jr and Mitch Evans, with NIO's Oliver Turvey and Dragon Racing driver Felipe Nasr also coming together.

Arguably the most controversial moment of the season so far came in Hong Kong, when Sam Bird nosed into the back of Lotterer's car as they ran one-two. Lotterer's right-rear tyre punctured and he fell from a possible first FE win to 14th, with Bird losing the on-the-road win he inherited due to a post-race five-second penalty for causing the collision.

Techeetah was so incensed by the incident and the penalty, as well as what it saw as "the amount of contact allowed in the current season of Formula E with the current car", that it protested the provisional results to argue that Bird's sanction did not go far enough.

At Sanya, last weekend, Rowland and da Costa clashed as the Nissan driver fought to stay in second place, and their scrap led to Sims ending up in the wall as the pack behind vied for the same asphalt.

At the end of the race, Sebastien Buemi's botched pass on Robin Frijns sent the Envision Virgin Racing car into di Grassi, which put the furious Audi driver out on the spot.

After the number of incidents he was involved in over the opening races of the season, Vergne had already voiced his concern, saying: "To me, this is not motorsport."

In the aftermath of the Sanya race, more drivers weighed in on the debate. "It depends how you look," says di Grassi. "You can say there is too much, too little, but that's a subjective point. I get it is good for entertainment, a lot of hard work for the stewards and for the guys because they try to make it fair.

"For us you know you are going to behave with the guy how the guy behaves with you. If the guy starts pushing you out, you are going to start pushing and it becomes too much contact in a sporting way. For entertainment, it's good, for sport maybe not so good."

When asked if there has been a noticeable increase in contact this season, Bird says: "Oh yeah, absolutely. These cars, the design of them sort of promotes it a little bit, which is a shame. When you go out on cold brakes, cold tyres, stuff like what happened to me today can happen.

"I think something needs to be done, I don't know what. But it's part and parcel of Formula E. It's exciting, but these things do happen. The races are crazy, I think that's why the public enjoy them. We just need consistent penalties. These contacts are going to happen. So long as we have consistent penalties and you know the risks, then it's OK. I'm not saying we need to go banger racing, but these things do happen."

Audi motorsport boss Dieter Gass also wrote on his Facebook page that he was: "Not happy with the outcome of the E-Prix in Sanya!" "Buemi's penalty was no penalty!" he continued, with liberal use of exclamation marks.

"It only moved him back to the position he was in before eliminating two Audis in front of him, so where is the penalty? Rather an invitation than a penalty! Very difficult to digest! Formula E must be careful not to diverge into a demolition derby - some dangerous precedents have been set now! I need to admit, I am worried!"

Di Grassi was so annoyed by the Buemi/Frijns clash taking him out of the race, and the penalty that was handed to the Nissan e.dams driver, that he took to Twitter to air his grievances. This attracted responses from Frijns and da Costa and blew up in the way that only internet arguments can (i.e. a lot of fuss over nothing).

But it did serve to highlight why the drivers feel so strongly about penalty consistency. Sims got a 30-second penalty for his clash with Mortara in Santiago, which he argued was the lightest of touches between the cars. Bird got just five seconds for his contact with Lotterer in Hong Kong, and yet, as Bird mentioned after the race, Lotterer got nothing for sliding into Vergne in a similar manner in Santiago last season.

There's also a problem here with non-contact penalties. In Mexico, Wehrlein was given a five-second penalty for cutting a chicane, even though the driver he was racing against - di Grassi - got by anyway when Wehrlein ran out of energy within sight of the line.

Full course yellow speeding penalties at Sanya for Buemi, Daniel Abt and Lotterer resulted in fines, and yet in Zurich last year, five drivers got in-race drivethrough penalties. Although it should be noted that the FCY infractions last weekend occurred after the chequered flag - with Abt telling his team he had released the limiter for just a moment.

The drivers themselves have put forward ways to reduce the amount of contact between the cars, and therefore the irritation of penalties. Lotterer suggests that one method to encourage cleaner racing would actually be to alter the front end of the Gen2 car to make it more fragile.

This would punish contact along the lines of Formula 1, where front wing damage can have a severe impact on car performance. In FE, the cars have so little downforce, any front wing or diffuser damage has minimal effect.

" reminded me of karting when we started to get plastic bumpers and we fixed them really strongly and we were able to just bump each off the track and it became a real serious problem because racing was not good anymore," he says.

"Then they banned the strong fixing and it resulted in losing a bumper immediately if you touched someone. If you lost a bumper you had to come in and get a new one and racing became a lot cleaner and we weren't touching anymore. It just reminded me a bit that it would be good to have some situation like that ."

It has been acknowledged that the step forward in technology with the Gen2 powertrains has increased the chances of races becoming flat-out efforts if there is even the slightest disruption. Many FE drivers feel this has a negative effect on the racing, and it is arguably also a factor in the increased amount of contact.

With the efficiency limitation factor removed, what would be simpler - but no less entertaining - overtaking moves are right on the limit. This makes them all the more breathtaking when they come off, but makes them appear clumsy when they don't.

Vergne, who has also expressed his displeasure at flat-out FE races this season, suggests limiting the amount of energy available to the drivers overall - varied on a race-by-race basis - could be a solution.

"We already talked to the FIA race director of Formula E ," he says. "And I think the quick fix and the only fix is to reduce the energy we have or to make it more difficult for energy saving. It's not normal that in Marrakech, which is the most demanding track to manage energy, we got 52kWh. And then in Hong Kong, or Paris or Monaco, which are extremely low in energy demand, that we have the same time of kWh for the same time of race. It's not normal."

Making fundamental changes to the strength and technical make-up of the cars is not the work of the moment. And deliberately making a car weaker is unlikely to appeal to the FIA, although a perfect opportunity to do what Lotterer suggests would be with the 2020/21 season body kit changes that FE CEO Alejandro Agag has already confirmed will take place.

But the governing body does have the power to solve the current contact problems in the here and now. For a start, it needs to get tough on the ham-fisted clashes that have been seen so far this season. And it needs to apply these penalties utterly consistently.

This would keep the 50/50 moves and entertainment that make FE such an engaging spectacle. But at the same time, improve driving standards. Overtaking attempts should never be discouraged, but it is the skilfully executed moves that live longest in the memory.

The FIA has the power to improve FE's show further still and at the same time, reduce the risk of it descending ever further into a needless destruction derby.