Porsche To Decide On Possible Electric Boxster This Year 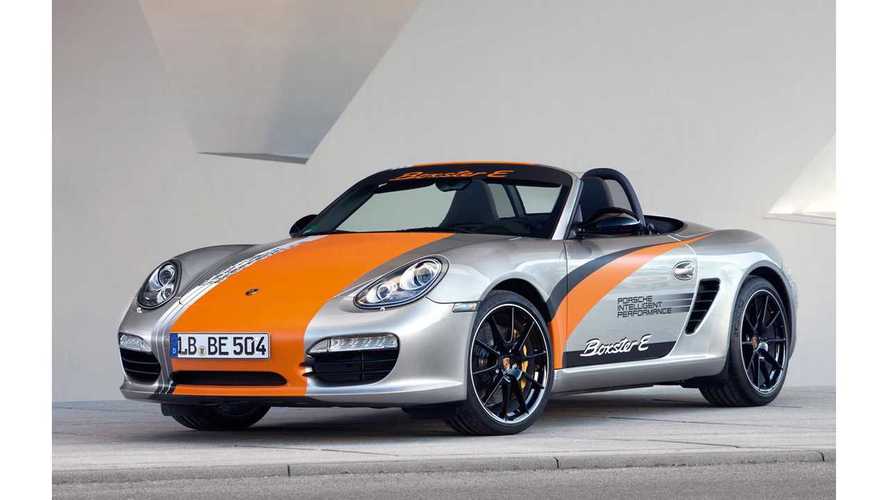 While the electric Macan might go by another name.

It was back in 2011 when Porsche toyed around with the idea of a fully electric Boxster by introducing a prototype that lacked an internal combustion engine. Aptly called the Boxster E, the zero-emissions, all-wheel-drive sports car had dual electric motors each developing 121 hp and an instant torque of 199 pound-feet (270 Newton-meters) for a combined output of 242 hp and 398 lb-ft (540 Nm).

The electric Boxster was 185 kilograms (408 pounds) heavier than the conventionally powered convertible and needed 5.5 seconds to reach 62 mph (100 kph) from a standstill. An electronic top speed limiter kicked in at 124 mph (200 kph) to protect the integrity of the battery. Speaking of which, the lithium-ion, liquid-cooled pack with a capacity of 29 kWh sat underneath the cargo area at the back and had enough juice for 106 miles (170 kilometers).

Porsche also engineered two prototypes with a rear-wheel-drive layout without the front-mounted electric motor, so half the power of the dual-motor Boxster E. The two tail-happy prototypes completed the sprint in 9.8 seconds and maxed out at a limited 93 mph (150 kph).

Far from delivering jaw-dropping specs, the Boxster E was a shy attempt towards electrification. Thankfully, EV technology has greatly evolved since 2011 and the Taycan coming later this year will demonstrate once and for all that electric vehicles don’t necessarily have to be boring. Porsche is confident that EVs are the way to go, with a Taycan Cross Turismo rugged wagon and a future Macan crossover already confirmed to come without an ICE.

As for the Boxster, it too might lose its gasoline-fed engines in the future. Porsche’s boss Oliver Blume told Which Car that thanks to its mid-engined nature, the convertible is suitable to receive the EV treatment. However, it all comes down to whether there would be enough demand to justify the efforts required to put an electric Boxster on sale. For this reason, the Stuttgart-based marque hasn’t made up its mind whether its entry-level sports car will go down the electric route in the foreseeable future, but says a decision will be made later this year.

If green-lighted for production, the electric Boxster will ride on a dedicated EV platform rather than on a modified version of the current architecture. Porsche argues the body of a conventionally powered model is not suitable for an electric car, which has to be designed from the ground up specifically for a sports car equipped with electric motors.

Blume reconfirmed Porsche’s plan to make an all-electric Macan, adding that a decision regarding the model’s name has not been taken. He also revealed the eco-friendly crossover – due at the beginning of the next decade – will look substantially different than the normal Macan, which will peacefully co-exist with its EV cousin for an unspecified amount of time.