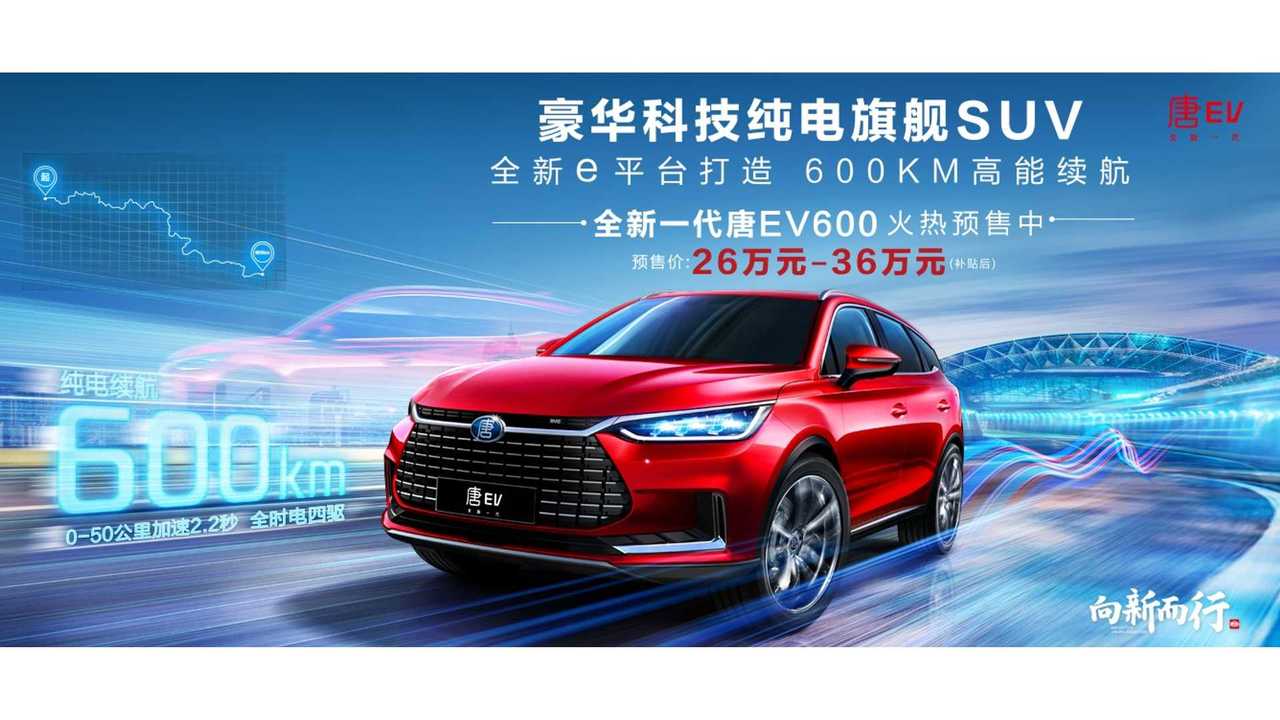 China-based automaker BYD Company Limited (BYD) sold a total of 520,687 vehicles in 2018, achieving a year-on-year jump of 25%, according to an official sales report released on January 7.

Gasgoo hereby summaries BYD's top stories that happened in 2018, helping you review how the automaker develop itself last year.

On Jan. 9, BYD's 300,000th EV rolled off the production line, not only signifying a milestone in NEV segment for BYD, but also reflecting the popularity of BYD's EVs.

BYD launched the SkyRail autonomous driving system for its monorail train in Yinchuan, capital of Ningxia Hui Autonomous Region on Jan. 10, the world's first straddle-type monorail empowered by self-driving system with China's wholly owned intellectual property rights. The autonomous system would be put into operation in the second quarter of 2018.

At the same time, Huawei Technologies Co., Ltd. provided its latest 4.5G eLTE service for the communication system for SkyRail.

BYD announced that it would manufacture pure electric and plug-in hybrid vehicles fitted with low-speed sound warning system from Jan. 1, 2018, aiming to alert pedestrians to avoid these moving vehicles on roads.

BYD and Maodou.com, a new car retail platform, had established a strategic partnership, local media reported in early February. BYD's models including the Song and Song Max would be available on Maodou.com. Customers could buy a new car valued RMB 99,900 with down payment of only RMB 9,900.

According to a concerned director from BYD, Maodou.com would provide a new financing and leasing service with low down payment and low interest rate for BYD customers. This new service mode would not only greatly improve customers' experience but also help BYD expand car-purchasing demands and upgrade brand service.

The new pure electric bus D9W, co-developed by the Chinese automaker BYD Auto and the Brazilian bodywork maker Marcopolo, was officially showcased at the 8th World Water Forum held in Brasilia, the Brazil's capital. Rodrigo Rollemberg, governor of the Federal District (Brazil) who attended the launching ceremony of the D9W, revealed that the local government will support the development of pure electric vehicle by means of tax incentives.

As early as July, 2014, BYD Auto had officially announced to build an electric bus plant in the city of Campinas, Brazil. In the next year, the automaker signed an agreement with the local biggest bodywork maker Marcopolo to start the localization of pure electric bus’ assembly. In July, 2015, BYD pure electric buses were officially handed over in Campinas. Additionally, BYD Auto's pure electric taxis are very popular there as well.

BYD teams up with Changan Automobile on new energy vehicles

On Apr. 17, BYD and Changan Automobile signed a cooperation framework agreement to deepen their cooperation in new energy vehicles (NEV) and work together to empower the development of Chinese NEVs.

BYD and Changan Automobile would jointly focus on the designing, matching, testing and manufacturing of NEV's electric drive products, which integrate electric control, electric motor and reducer into one. They target to finish the development of electric drive products and achieve mass production of the products. It was expected that some Changan-branded models would carry the new high-tech product next year.

At the launching ceremony for Apollo's one-year anniversary, Baidu announced that BYD had officially joined the Apollo platform and became its 100th partners.

BYD launched the DiLink intelligent ecological system and e Platform, along with a bunch of new models at Auto China 2018, including the latest concept E-SEED, the Song MAX DM and the Yuan EV 360. Besides, the presale price of the new BYD Tang was also revealed.

The DiLink intelligent system (hereinafter referred to as DiLink System) highlighted BYD's stand at Auto China 2018. With two striking features of openness and intelligence, BYD can transplant mobile ecology into the vehicle through DiLink system.

BYD announced on May 27 that the Yuan EV 360, a small-sized BEV (battery electric vehicle) model officially go on sale with four versions, priced from RMB 79,900 to RMB 99,900 after the subsidiaries. This is the second all-electric SUV model at lowest price ranging from RMB 70,000 to RMB 80,000, aside from BAIC BJEV's EX360.

The Yuan EV360 features ternary lithium battery with a combined range of 305km. When the vehicle keeps running at the speed of 60km/h, the battery will hold a range up to 360km. Besides, the new model is available with the fast-charging mode. An 80% of battery capacity can be finished within 30 minutes using a 40kW fast-charging pile.

On May 28, BYD Automotive Industry Co., Ltd., a holding subsidiary of BYD Co., and Daimler Greater China Ltd. would add a respective investment of RMB 400 million in Shenzhen Denza New Energy Automobile Co.,Ltd., the 50:50 joint venture of the two which manufactures and supplies supreme electric vehicles, to improve the joint venture's asset-liability ratio and expand the sales network.

Shenzhen Denza New Energy Automotive Co., Ltd., was founded in 2010 and is based in Shenzhen, with a registered capital of RMB 3.36 billion.

BYD, Baidu and Dadao, a sharing vehicle platform, announced on June 6 that they had signed an array of cooperation agreements in new energy vehicle, autonomous driving technology and car-sharing operation of vehicles.

It is reported that the three parties would capitalize on their advantages in new energy vehicle market, intelligent driving or autonomous driving technologies and car-sharing operation areas. Besides, they would mainly explore the development and application of autonomous driving technologies in new energy vehicle area. In particular, they would conduct deep exploration and cooperation on the issue that how intelligent vehicles can be quickly put into operation through a car-sharing platform.

BYD announced on June 25 that it planned to offer loans to its subsidiaries with raised funds, in order to carry out a R&D project of new-energy vehicles (NEV). By virtue of the NEV R&D project, BYD expected to release model products that better meet market demands, as well as customers' diversified demands.

Nanchuan plant would engage in manufacturing ternary lithium batteries. BYD would not use all of the batteries in its models, but would take a flexible approach in accordance with the changing market demands. After BYD started to supply batteries to other companies, it had provided batteries for NEVs and buses of a number of automakers, such as Dongfeng Motor, Shudu Bus, Shandong Tai Kai Automobile, and etc.

BYD and Changan Automobile signed a strategic cooperation agreement on July 5 in Shenzhen, aiming to establish a joint venture, which specializes in the manufacturing and marketing of new-energy vehicle (NEV) batteries. By virtue of both parties' advantageous resources in such areas as traditional fuel-powered vehicles, NEVs, intelligent internet, sharing mobility and overseas market, BYD and Changan would deepen their cooperation comprehensively with focuses on electrified and intelligent vehicles as well as sharing mobility.

Under their cooperation, Changan and BYD showed their willingness of capital cooperation in both the upstream and downstream of new energy industrial chain. They would jointly develop battery business for NEVs and plan to set up an independent vehicle-battery JV.

BYD and Faurecia, a world-leading auto parts supplier, jointly held an opening ceremony for their auto seat joint venture in Shenzhen on July 5.

Founded with a registered capital of RMB 200 million, the auto seat JV was 30% controlled by BYD, while Faurecia holds a 70% stake in the JV. The JV specializes in R&D, manufacturing, assembling, marketing and delivery, covering product R&D and seat products, which include complete car seats, seat framework, seat foaming and seat trims.

BYD and local government of Chongqing Bishan District signed an investment cooperation agreement on August 23, planning to invest RMB 10 billion in building a power battery program with an annual capacity of 20GWh, which is designed to manufacture such core products as power battery cell, module and develop other supporting industries.

Wang Chuanfu, chairman of BYD, revealed that the company had been facing the shortage in battery production capacity. BYD's annual battery capacity reached 16GWh by the end of 2017. As its planning goes, the automaker will see its battery capacity increase to 34GWh and 39GWh in 2019 and 2020 respectively.

BYD and Baidu cemented their partnership at BYD's Worldwide Developer Conference on August 9, working together to achieve the volume production of autonomous vehicles over the next three years.

Under the step-up cooperation, the automobile version of Baidu Map would be utilized in BYD-developed cars across the entire lineup. In addition, Baidu would provide complete intelligent driving solutions for BYD to output L3 autonomous vehicles. Both parties are gunning for the mass production of autonomous vehicles within three years.

BYD forged a strategic partnership on September 5 with 360 Security Technology Inc.(hereinafter referred to as 360), a Chinese Internet security company, to jointly create an intelligent car ecosystem by integrating resources of IoV (Internet of Vehicles), cybersecurity solution and IoT (Internet of Things), etc. Besides, both parties agreed to jointly build an IoV cybersecurity lab.

First vehicle rolls off the line at BYD Ningxia NEV base

BYD's new energy bus manufacturing base located at Wangyuan Industrial Park in Yinchuan City saw its first complete vehicle officially roll off the assembly line on September 18, according to local media. This is also the first all-electric bus that was independently made in Ningxia.

BYD signed an agreement with Yinchuan municipal government on April last year to build an electric bus base in Yongning County, which reportedly started construction on June 7, 2017. Less than 16 months later, such main facilities as the bus car factory, the all-electric bus manufacturing factory, the painting workshop, the testing workshop as well as the administration building have been completed. Moreover, 500 units of all-electric buses bought by Yinchuan Public Transport Co.,Ltd have been deployed across the city.

The BYD Qin Pro, a compact sedan model under BYD, hit the market on September 20. Based on the MEA platform, the new model boasts a brand new design language, containing the fuel-burning version, the DM (dual mode) version and the EV version with prices ranging from RMB 100,000 to RMB 190,000.

The 5-seat BYD Tang formally hit the market on the first day of the Auto Guangzhou 2018. Adopting a 2-3 seat layout, the new model still has a wheelbase of 2,820mm.

The all-new BYD Tang EV, which was unveiled in June this year, had already rolled off the production line, local media reported in early December. The new model's presale started at the Auto Guangzhou 2018 with price ranging from RMB260,000 to RMB360,000.

The new EV model was said to provide three variants based on battery range—the Tang EV500, the EV550 and the EV600. The version rolling off the production line was the Tang EV600. Powering the vehicle would be a permanent magnet synchronous generator that churns out a maximum power of 180kW, which provides the vehicle with a range up to 600km.

On December 10, BYD unveiled its car-level IGBT4.0 technology in Ningbo. BYD claimed that it is the only Chinese automaker that can mass produce car-level IGBT with complete industrial chain.

The automaker said that its IGBT4.0 outperforms many other similar products in various key technical indicators. According to the company, its IGBT4.0 can output 15% more current than other competitors so that the vehicle can achieve greater acceleration and higher power output.