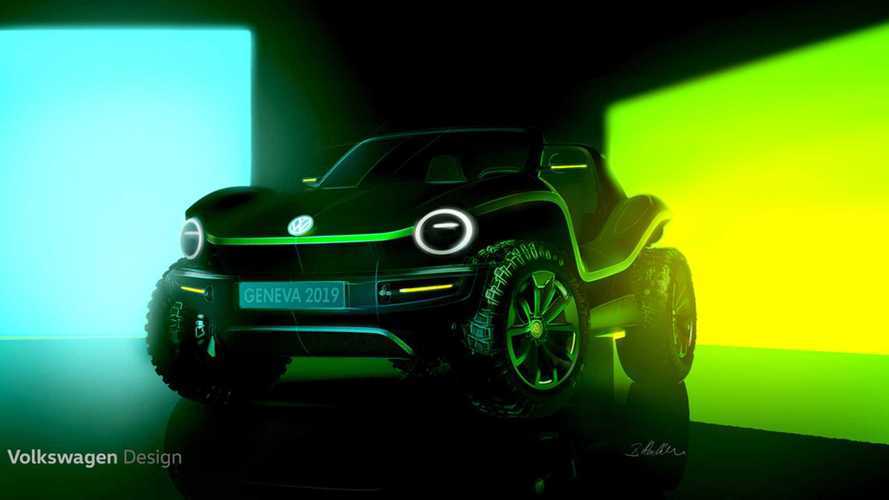 It will be unveiled next month at the Geneva Motor Show.

In the late 1960’s something curious happened in America. Actually, lots of curious things were taking place back then, but in the car world, people were yanking the exterior bits off Volkswagen Beetles and replacing them with open-air, barebones bodies. The result became the iconic VW beach buggy, and now, the automaker is reviving the concept with an electric twist.

Volkswagen just dropped a pair of teaser photos for a new dune buggy concept, based not on the outgoing Beetle but the company’s Modular Electric Drive Matrix (MEB) platform. Yes, the classic rear-engined beach buggy is now reimagined as an all-electric dune hopper, and though the teaser photos don’t reveal all the details, we can see that the core elements appear to be present. The body is all curvy and swoopy, the roof is open, and there are no doors. The only thing missing is a properly vintage coat of crazy metallic paint, though the teasers suggest the concept will wear a garish shade of green. That works for us.

“A buggy is more than a car,” said Klaus Bischoff, VW’s head designer. “It is vibrancy and energy on four wheels. These attributes are embodied by the new e-buggy, which demonstrates how a modern, non-retro interpretation of a classic can look and, more than anything else, the emotional bond that electric mobility can create.”

As this is just a teaser, we don’t have details to offer just yet. We do know that Volkswagen’s primary mission with this retro reboot isn’t so much about tapping into a nostalgic vibe, but showcasing the versatility of its MEB chassis. There’s certainly something to be said for the compact nature of an electric system – there’s no need to route exhaust systems, fuel lines, or make room for bulky driveline components that could change from vehicle to vehicle. We’re not sure aftermarket body-swapping will become a new fad for electric vehicles, but from a practicality standpoint, it’s easy to see how an automaker could easily adapt the platform to accommodate everything from sports cars to SUVs.

VW will officially reveal its dune buggy concept in just over a month at the 2019 Geneva Motor Show.