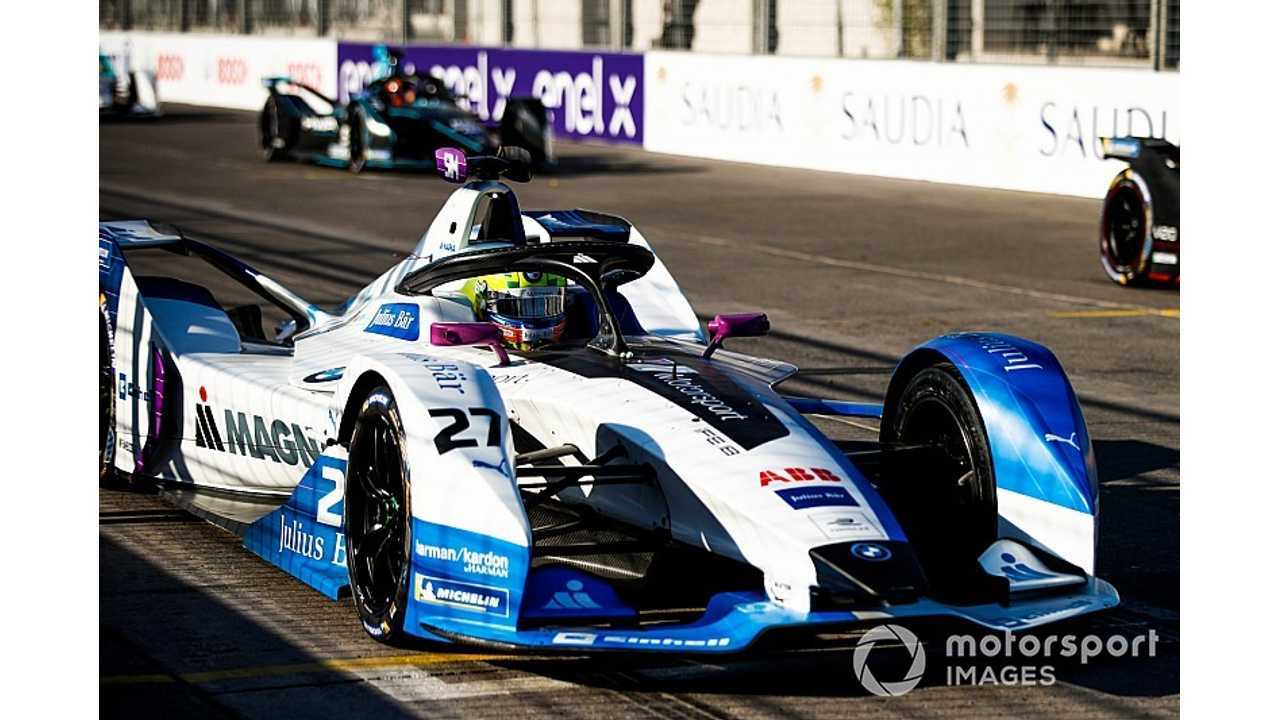 Alexander Sims is adamant he did not hit Edoardo Mortara into a spin during last weekend's ABB FIA Formula E Santiago E-Prix, but accepts the penalty he received for the incident.

Sims was challenging Mortara for fourth place during the closing stages of the race when they came together at the tight Turns 8/9/10 chicane, with Mortara spinning around and falling behind the BMW Andretti driver as a result.

After a brief battle with Audi's Daniel Abt, Sims secured third on the road, but was given a post-race time penalty for the Mortara clash.

Speaking before the results of a protest lodged by BMW was announced, Sims told Motorsport.com that: "Honestly, I didn't feel a single thing – I didn't feel contact. Perhaps it was the lightest of touches and that's what spun him around.

"I went to the stewards immediately, not to try and weedle my way out of the situation, but just to give my honest view that I genuinely didn't feel any contact there.

"We were very close, but I didn't feel there was a touch. We're looking at different camera angles because if I did touch him, fair enough, the penalty is what the penalty is. But that's how I saw it."

BMW presented additional video and photo evidence on Sims's behalf, but the protest was rejected.

Sims maintained he did not feel any contact when approached by Motorsport.com after the protest outcome was revealed, but he accepted the decision.

When asked for his view of the incident, Mortara, who ended up fourth in the final classification, said: "What happened, happened.

"I don't think it is that smart what he did but anyway, I think it was a bit a mistake from inside and he also paid the price, so in the end I'm happy with the fourth place and I'm not really thinking about what happened with Alexander."

Sims progressed from eighth on the grid to reach third in the extreme heat of the race, which was just his third FE start.

"I really enjoyed it out there – it was challenging, we were obviously trying to manage the temperatures," he said.

"With the two FCYs it made it slightly less stressful but nevertheless, it was hot.

"It was great fun to be honest – I had quite a few laps towards the end of the race on my own so we were just trying to manage the pace.

"I've got to give full credit to the BMW engineers for doing a great job with all the work they did before the weekend anticipating the hot temperatures and in the race as well, giving me loads of information to let me do my job."

Sims has been in podium contention for the last two races, but although he has not achieved the high-profile result said he "put the frustration behind me very quickly".

"I keep pinching myself and saying it's a lovely situation to be in, three races into Formula E and I should have had two podiums and potentially one win," he continued.