Hyundai And H2 Energy To Launch 1,000 Hydrogen Trucks in Switzerland 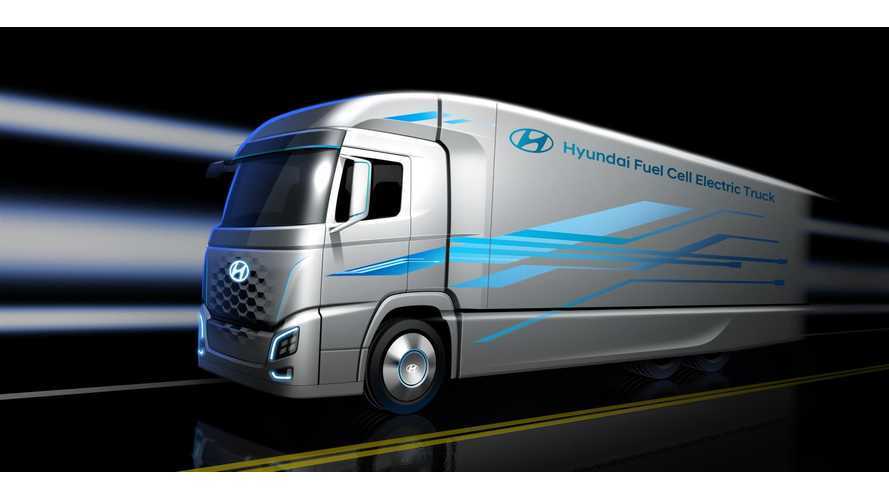 Hyundai announced the world’s first fleet of fuel cell trucks in partnership with Swiss company H2 Energy. In total, 1,000 vehicles are to be deployed in Switzerland between 2019 and 2023, which on average is 200 annually (in the beginning the numbers are expected to be lower though). The two companies have entered into a Memorandum of Understanding (MOU).

The South Korean semi-trailer truck, hinted at ahead of IAA, will be able to drive up to 400 km (250 miles) in real-world conditions using 32.86 kg of hydrogen stored in eight tanks.

According to Reuters, Hyundai sold so far around 1,140 hydrogen fuel cell cars, which shows how big is the deal for 1,000 trucks is in comparison with the current achievement.

More in the press release:

The MOU signing ceremony took place in the IAA Commercial Vehicles 2018 exhibition’s convention center and was attended by key individuals from each company, including Hyundai Motor’s Executive Vice President and Head of Commercial Vehicle Division, In Cheol Lee, as well as Chairman of H2E, Rolf Huber.

We are yet again advancing the field of fuel cell technology in the automotive industry with today’s announcement of our ambition to commercialize the fuel cell electric truck for the first time in the world” said Executive Vice President In Cheol Lee. “We will continue to seek opportunities for expanding into other markets by carefully monitoring multiple factors such as fueling infrastructure and governmental policies.

The fuel cell electric truck is being developed according to European regulations. It features a new 190kW hydrogen fuel cell system with two fuel cell systems connected in parallel, also a feature of NEXO. It is expected to deliver a single-fueling travel range of approximately 400km, and in order to secure sufficient range, eight large hydrogen tanks are being compactly installed, utilizing areas such as between the cabin and the rigid body.

The fuel cell electric truck boasts a distinctive design. It is presented in a simple and clean design which is also aerodynamically efficient, and features a spoiler and side protector.

The front grille symbolizes hydrogen through geometric shapes, giving the vehicle a unique and powerful look. The vehicle emanates an eco-friendly look with a blue color application and a bold side body graphic on the container, which also visualizes its dynamic character.

H2 Energy is a company specialized in the production and supply of renewable hydrogen in Switzerland, with business subsidiaries in Germany, Norway and Austria. The company is experienced in the roll out of an optimized hydrogen ecosystem, which focuses on commercial viability for all stakeholders.

A sustainable hydrogen economy needs a designated ecosystem for hydrogen. This is why our collaboration between Hyundai Motor, H2 Energy, the Swiss H2 Association, and Key electricity producers in Switzerland is strategic and makes a lot of sense.

The global demand for eco-friendly commercial vehicles is expected to increase as eco-friendly government policies are enforced around the world.

To cater to growing opportunities in the sector, Hyundai plans to diversify its fuel cell electric commercial vehicle line-up. Currently under development is the medium sized fuel cell electric truck (Payload: 4~5ton) which can be used in the public services domain such as vehicles used for cleaning.