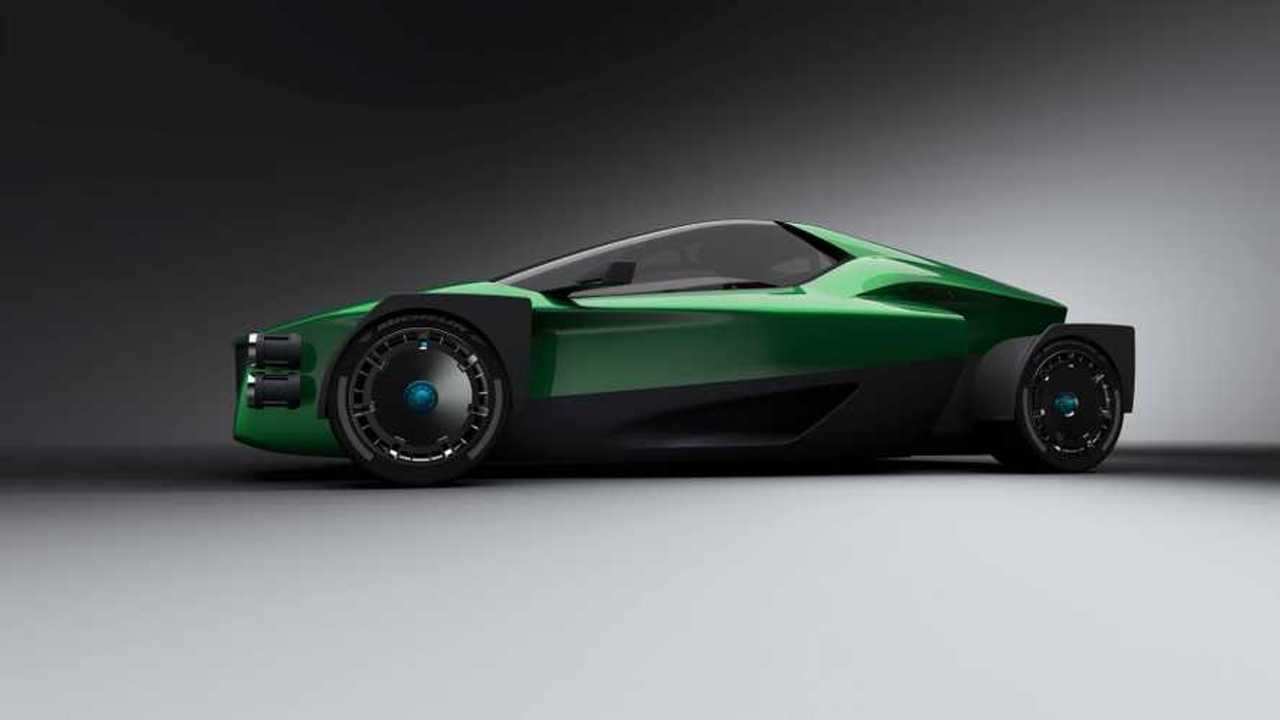 Aims to be the "world’s first electric supercar with on-road and off-road capabilities." Price? $1 million.

With a 0 to 60 mph (96 kph) sprint in an almost unbelievable 1.9 seconds, the new Tesla Roadster is set to become the world’s quickest production car, but not if XING Mobility has something to say about that. Based in Taipei, the electric powertrain startup has taken the wraps off an interesting rally-inspired supercar producing an astounding one megawatt (1,341 hp) of power to match the One:1 and the record-breaking Agera RS. But while those two hypercars from Koenigsegg have combustion engines, the “Miss R” is entirely electric.

The immense power comes from four independent electric motors providing the interesting machine with four-wheel torque vectoring and some amazing performance numbers: 0-62 mph (0-100 kph) in 1.8 seconds, 0-124 mph (0-200 kph) in 5.1 seconds, and a top speed in excess of 168 mph (270 kph) – considerably slower than the Roadster’s 250+ mph claimed velocity. While the Taiwanese company doesn’t say anything about the maximum range, it does mention the Miss R has been engineered to accommodate battery swapping – a procedure set to take less than five minutes.

The in-house developed modular battery system has a LEGO-like configuration and features 98 stackable modules, each containing 42 lithium-ion cells, thus holding a total of 4,116 cells. XING Mobility is already in talks with various companies interested in acquiring the battery system and putting it to good use in anything from buses to boats.

Much like the aforementioned second-generation Tesla Roadster, the Miss R won’t be out in the near future as XING Mobility aims to unveil a fully working prototype towards the end of 2018. Production will be limited to just 20 units and these are going to be available beginning 2019 with a starting price of $1 million.

As a final note, the new Roadster might still come out on top in terms of acceleration as Tesla’s head honcho Elon Musk has already hinted a special option package will take the car to “the next level.”

The press release, attached below, references Tesla and the new Roadster several times:

- XING Mobility is an electric powertrain systems provider to the world’s commercial and industrial vehicle manufacturers.

Taipei, 22 November 2017 - Taipei-based electric powertrain startup XING Mobility have announced a 1,341hp rally-inspired supercar. The world’s first electric supercar with on-road and off-road capabilities, ‘Miss R’ is described by the company as a vehicle truly designed for performance driving, boasting four-wheel torque vectoring and capable of staggering speeds. Powered by 4 independent 350V motors, XING’s prototype supercar has projected performance of 0-100km/h in 1.8 seconds, 0-200km/h in 5.1 seconds and a max speed of over 270km/h.

The reveal comes shortly after Tesla announced their second-generation 2020 Roadster, the specs of which on the surface are very similar to that of Miss R. However, while the Tesla Roadster aims to achieve an experience based on existing sportscar ideals on the road, XING Mobility designed Miss R with an entirely different aspiration: reaching unthinkable performance capabilities on-road, on-track and off-road, and achieving the kind of versatile driving experience that has never been available to drivers before. XING Mobility’s Co-founder and CEO, Royce YC Hong, explains, “Miss R is the embodiment of the paradigm shift of EVs surpassing traditional combustion-engine cars in both performance and capability. The core idea behind the prototype is to achieve game-changing performance levels and driving experiences that are otherwise impossible to achieve in a gasoline-powered vehicle.”

Most significantly, while Tesla has ambitions of becoming world-class car makers, XING Mobility is positioned as a provider of powertrain systems to commercial and industrial vehicle manufacturers. Using supercar as proof of concept, the company have begun to serve this extremely under-served market by deploying Miss R's powertrain technology in industry vehicles worldwide.

At present, the difficulty that electric vehicle makers face with achieving maximum performance is that battery cells, such as the commonly used 18650 lithium-ion cells produced by most major battery suppliers, are at risk to overheat when rapidly charged and discharged. Although vehicles can be equipped with powerful motors, effective and safe methods of maximizing power density of these drivetrains is extremely difficult with the current cooling and enclosure options on the market.

Today, the company disclosed the “secret sauce” behind the prototype’s surprising power: their patented immersion cooling technology. The ‘XING Battery System’ consists of stackable, LEGO-like battery modules which house 42 lithium-ion cells, all of which sit directly in a mystery liquid which was revealed to be 3M™ Novec™ 7200 Engineered Fluid.

Novec Engineered Fluids are a family of non-conductive fluids that have long been used for solvent cleaning, heat transfer applications, fire suppression and supercomputer cooling. 3M describes the brand of products as smart, safe and sustainable solutions intended to clean, cool, coat and protect with a high level of performance, a large margin of safety, and with environmentally sustainable properties to help protect the world we live in. XING Mobility is the first company globally to officially announce the use of Novec fluids for modularized battery cooling in electric vehicles, which XING says has unlocked the ability to achieve continuous high-discharge power output, increased stability and a high level of predictability due to the exceptional heat transfer, non-flammable and non-toxic properties of Novec fluids.

“The use of Novec Engineered Fluids to immersion cool EV batteries is a breakthrough application, addressing the critical performance needs of the market in a new and disruptive way. 3M is delighted to work with cutting-edge companies like XING Mobility to leverage the unique properties of Novec Engineered Fluids, in their innovative designs, to deliver such extraordinary performance gains to the industry”, said Michael Garceau, who leads 3M’s market development effort for EV battery immersion cooling.

The effectiveness of the ‘XING Battery System’, paired with the qualities of 3M™ Novec™ Engineered Fluids, has enabled the startup to achieve market-leading performance with far fewer cells. Specifically, Miss R’s battery pack can produce 1 Megawatt of power with 98 modules holding 4,116 cells. between 30-50% less than that of other electric supercars currently being produced. Additionally, while car manufacturers race to tackle the challenge of range and charging restraints with Tesla announcing a new 1000km range in their Roadster last week, XING Mobility have taken an alternative approach by adopting a highly efficient and lightweight battery swap system that allows the entire battery enclosure to be exchanged within 5 minutes.

So when will we see the technology in action? Miss R has undergone a series of initial tests, including one with the full drive-train exposed, the footage of which the startup has released in a teaser video today. The next step will be high-speed testing the vehicle at full power, with a view of revealing the completed prototype in late 2018. The company will build just 20 of the limited-production cars, which they intend to make available for purchase in 2019 with a price starting at $1million USD.

Alongside their aims to put an incredibly capable supercar into production, XING Mobility is already working with commercial and industrial vehicle makers from around the world to apply the ‘XING Battery System’ in their respective city buses, ride-sharing scooters, construction vehicles and special-purpose boats. According to XING Mobility Co-founder and CTO, Azizi Tucker, “the industrial vehicle market is primed for a conversion to electric drivetrains due to functional needs, increasing emissions requirements and public noise reduction. However, this market is currently extremely fragmented and revolutionizing much slower than what we’re seeing in the passenger car market. The first modularized design of its kind, the ‘XING Battery System” is an opportune solution for small to medium volume vehicle makers, catering to a huge variety of shapes, sizes and power requirements and enabling fast deployment with minimum R&D effort and cost.”

The company describe their unusual base of Taiwan as their greatest competitive edge, with more than 70% of Miss R’s components sourced within 300km of XING Mobility’s workshop. Starting with the mass production of their battery systems and moving onto the supply of other technology born out of Miss R, the company aspires to become the driving force in making Taiwan a major player in the world’s EV initiative.