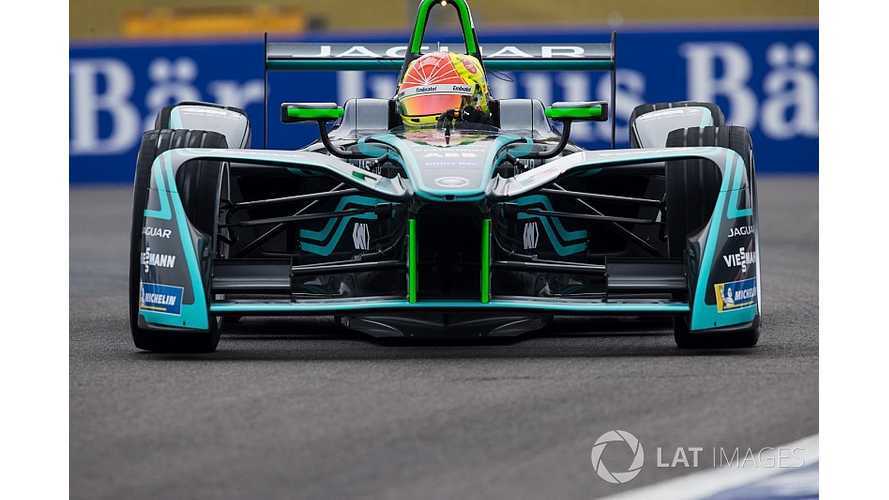 Motorsport.com columnist Pietro Fittipaldi reflects on his first run in a Formula E car, as he finished runner-up in the category's official rookie test at Marrakesh.

This past Sunday I was given the great opportunity to try out Jaguar Racing's Formula E car in the Marrakesh rookie test.

It was a really busy test day for the whole paddock, with teams doing all sorts of development work and having to adjust their schedules because of rain in the morning session.

At Jaguar, I was partnered up with Paul di Resta, who was extremely nice and great to work with, as a driver with a lot of experience and somebody I could learn and get advice from.

My great friend Nelson Piquet was there too as the team's regular driver, and I can't thank him enough – he guided me through the test and helped me get up to speed as quickly as possible.

I was happy to have completed a lot of running and development work for the team, but it was also great to put together a solid lap and end the day in second place.

As it was such a competitive field for the test – with a lot of experienced drivers, a lot of very talented drivers – it was crucial to produce a strong performance, and I hope this can open some more doors for me in Formula E down the line.

Of course, Audi's Nico Muller was a bit ahead in first place. I don't know where he found that lap record time, but I do know he's turned a few heads in the paddock, especially as track conditions weren't all that great after the rain.

It was my first time driving a battery-powered car and I was really amazed. It really had a good amount of power – I was expecting less – and the sensation of speed was very much there.

As the series races on these very tight street circuits, everything happens so quickly in the car, the corners come fast and you're always close to the wall, so it sort of compensates for for the top speed difference.

The most enjoyable part though was that the car felt very compliant with bumps and kerbs, to the point where it almost felt like a normal, smooth circuit. You can really drive aggressively, and that's what makes it so much fun.

Hearing no engine noise felt a bit strange at first, but you get used to it and it starts to feel like something from the future.

It also allows you to hear other things. For instance, there was a hairpin in Turn 10, really tight hairpin - usually in corners like that, if you have the normal engine-powered car, you go through the corner, you can't really hear what the tyres are doing or anything.

With this car, every corner you go through, it's like you have a sixth sense, you can hear the tyres sliding before you actually feel the oversteer, so you know, in a way, when you're exceeding the limit.

The treaded Michelin tyres are a big difference. Usually on slicks, if you don't have tyre warmers, you have to go out of the pits, you have to warm up the tyres, warm up the brakes at the same time, usually takes one or two laps, then you start pushing.

It's different if on a race run, yes, for sure the tyre changes and you have to adapt your driving a lot. But it doesn't degrade the way, say, a slick tyre at Jerez does, and when you do a race run in a Formula E car, you have bigger worries – namely energy consumption and the battery regen.

You not only have to focus on driving fast, you don't just have to focus on traffic, but on energy consumption, even the tyre wear a bit, the regeneration of the battery, it's all really sophisticated.

Having two cars was something I found to be unusual, but quite cool. In single-seaters, you often get drivers saying a particular chassis is bad – and sometimes it is, cracked or delaminated, and you might only find out after a couple of races of poor performance.

In junior racing, when something was wrong, we'd send the chassis to the manufacturer, they would fix it, they'd send it back, and we go again.

Here it was nice to be able to, for the first time, do a back-to-back comparison between two chassis. Although in this case I really didn't find much of a difference.

The Formula E test experience felt very comparable to my run in the Porsche LMP1 car, and I was left impressed with the extremely high level of the series, its drivers and its teams.

A lot of the teams are investing a lot, a lot of people are working behind the scenes trying to develop as much as they can, in every way, be it mechanical set-up of the car, aero, the drivetrain, the motor for the battery.

And it's growing as a series, there will be many manufacturers for season five, so the level is just going to keep getting higher and higher.

In the future, if there is an opportunity to do Formula E, I'd of course be very open to doing it - especially given how well the test went and everything that I learned.

I like the championship, I think my driving style suited the car well, everything went very well in the test. Of course, at the same time, I still have my sights on Formula 1 as well.