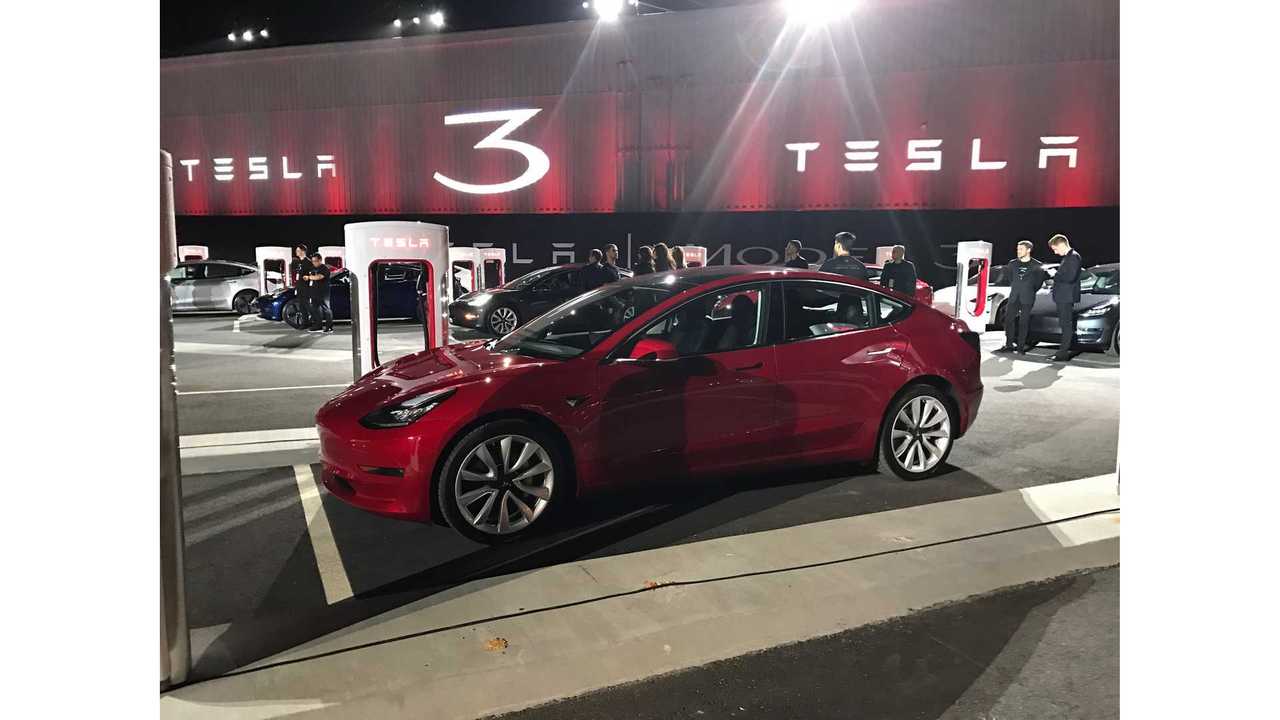 Now that much more information is available about the Tesla Model 3, a seemingly accurate and easy-to-use cost estimator is available online, and it's the first to include a data-driven U.S. federal rebate estimate.

Many have tried to estimate the precise cost of the Tesla Model 3 through early guesses, leaked information, and now via some more concrete details. We have also found (and shared) some user-produced online configurators. The authentic configurator is available now on Tesla's website, but unfortunately, only employees have access.

All along we were told that the base Tesla Model 3 would have at least 215 miles of range and cost $35,000 before the U.S. federal tax credit. Tesla stood true to its estimates, with a 220-mile Standard version starting at the promised dollar figure (full Model 3 details here).

However, you can't get it yet.

Instead, only the Long Range model is being manufactured initially. The good news is it's only $9,000 more than the Standard version (from $44,000) and gets you a whopping 310 miles. For those who were planning to buy the base, and may or may not get the federal rebate, the math for the long range Model 3 with rebate is therefore pretty close.

Keep in mind, however, that if you check all the boxes (Autopilot, Premium Upgrades, Sport wheels, Paint aside from black, Self-Driving capability) you're still looking at a $60,000+ car. Comparatively, a loaded Model S or X 100D will cost you about double that (at $114,500 and $119,500 respectively). This also brings to light the Tesla Model 3 dual-motor all-wheel drive performance variant, which Elon Musk assured will be offered by the middle of next year. While we don't yet have a price for the performance Model 3, a loaded Model S or X P100D will set you back $152,000 and $159,000 respectively.

Ben Sullins of Teslanomics has now created a nifty Model 3 cost estimator that factors options and delivery date - check it out here.

Sullins used InsideEVs' historic Model S and X sales data and all the information we have learned to date on the Model 3 roll-out in an attempt to forecast when the federal tax rebate will expire.

So, if your delivery date falls beyond Ben's data-driven target date, the estimator will take that into account. It factors in when the rebate will begin its downward spiral, and applies the estimated remaining discount against the car's price with options.

I built a tool to let you calculate the cost of your model, including the federal tax credit.

The way this came about was when I had this idea to try and estimate when Tesla will deliver their 200,000th car in the US. To figure this out, I partnered with the team at https://insideevs.com/ have some excellent data going all the way back to when the Model S was first released back in 2012.

Since then they’ve been meticulously tracking how many EVs Tesla, and others, have sold in the US. If you have any doubt about this data, I suggest you check out their monthly sales scorecard which they regularly update as new information comes out. These guys do their homework, so I feel good about where the data is coming from here

From there it was pretty easy to generate a forecast model that would predict S and X sales for the next 12mo. Because both of these models have been in production for a while, this estimate should be pretty reliable, especially since we have data by month for almost five years now.

On the most recent earnings call Tesla also stated that "Orders for Model S and Model X have also been increasing, both leading up to and following the Model 3 handover event. In July, our weekly net order rate for these vehicles was about 15% higher than our Q2 average weekly order rate. In addition, although too early to draw strong conclusions, we are seeing an even further increase in net Model S orders since the July 28th event. This growing demand gives us even more reason to expect increased deliveries of Model S and Model X in the second half of this year."

The next piece of the puzzle was to figure out the Model 3 sales for the next six months or so. And, on that same earnings call Tesla had some interesting things to say about this…they said "In addition to the increased orders for Model S and Model X, customer response to Model 3 has been overwhelming. Since the handover event last week, we are averaging over 1,800 net Model 3 reservations per day. We opened the Model 3 configurator to the thousands of our employees with reservations so they could begin ordering their vehicles. Soon, non-employee customers will begin receiving invitations to order their cars in small groups based on when they placed their reservations, with existing Tesla owners receiving first priority. Deliveries to non-employees will begin in Q4."

Now you can see this as good or bad news…depending on when Tesla is estimating you’ll get your Model 3.

Taking into account those statements and also their estimate that they " are confident we can produce just over 1,500 vehicles in Q3, and achieve a run rate of 5,000 vehicles per week by the end of 2017” my original delivery ramp is looking pretty good

So when you add up the S and X projections from before with these Model 3 predictions, I have them hitting that 200K mark in late Q4 of this year, which could be a disaster.

The way the tax credit works is once a manufacturer in the US hits the 200K mark the “phase out” begins. All cars produced that quarter and the following receive the full credit, people that take delivery in the next two-quarters get 50% of that, then for the last two quarters of the phase out individuals who take delivery just get 25% of the 7500 credit.

So my guess is that Tesla will push out that 200,000th delivery until early Jan 2018 so they can maximize the tax benefit to us model 3 reservation holders. Elon even tweeted about this when asked and he said "We always try to maximize customer happiness even if that means a revenue shortfall in a quarter. Loyalty begets loyalty." So that’s why I’m estimating Tesla will deliver their 200,000th car in the US next January of 2018. This was the inspiration for the calculator.

On the calculator, I wanted to make it more than just some boring numbers so I ended up building a visual version which will let you pick your color, wheels, and upgrades. From there you click “Show Me, ” and a new page opens with the result…On this page, you’ll have a beautiful printable invoice, yet something I hope you still find pleasure in viewing and maybe even printing out to hang on your wall or cube or wherever you spend most of your time.