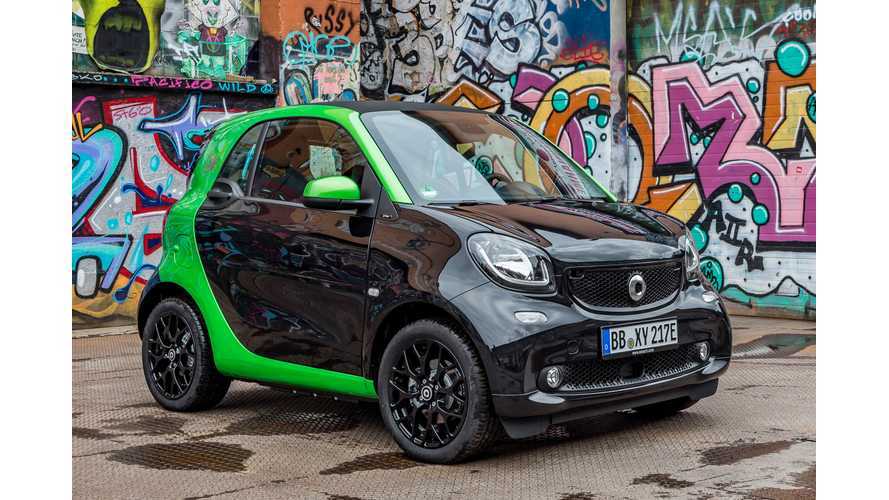 Remember the whole 68 miles of electric range that the last generation Smart Fortwo ED got, according to the EPA? Well, say goodbye to ten of those miles, because the 2017 Smart Fortwo ED was just rated at 58 miles.

Unsurprisingly, Smart did not put out a press release about this decrease and the official Twitter feed is silent on the matter, and we learned about it from a reader comment on yesterday's post about two-thirds of the Smart dealers in the U.S. closing or becoming service-only in the wake of the brand's shift away from gas models and focusing on electric models only.

The EPA's Fuel Economy website was updated recently and, despite the same stock photo used for the different model years (the 2017 version is indeed the updated electric Fortwo you see in the picture above), the newer electric vehicle does in fact lose about 15 percent of its range compared to the older version.

A quick look at Smart's US website today also reflects the change to 58 miles.

The lithium-ion battery capacity has remained the same between the two versions, at 17.6-kWh, so it is likely weight and/or aero related. We've asked Daimler representatives about the reasons for this drop, but have not yet heard back. A year ago, there was talk that the new Smart Fortwo ED would get up to 85 miles of range and company materials even said 80 miles was expected, so something either changed or Daimler severely underestimated the impact of the "updates" it was making to the style and powertrain.

The last piece of the puzzle is a glimpse into the expanded fuel economy figures from the EPA website. There, we can see that the 2017 Smart Fortwo ED will have a city range of 63 miles and a highway rating of 51 miles. The interesting bit is the line below, where is says that the "combined range voluntarily lowered from 69 miles." What this means, exactly, is something we hope the company will address when it responds to our questions.

And as for a mildly ironic Tweet from the company, we offer this:

Going into the city or getting out, the smart fortwo Electric Drive is the perfect ride. pic.twitter.com/Nvz2dHX9jW