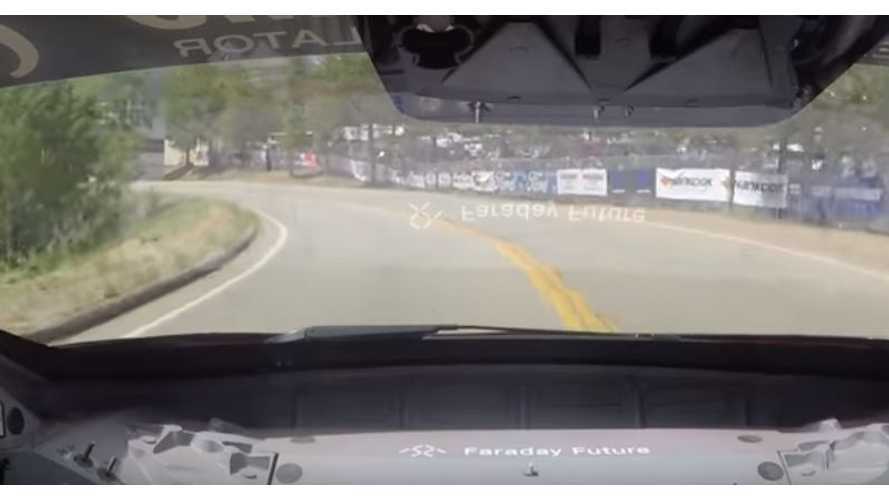 We reported on Faraday Future's "production" electric vehicle record at Pikes Peak when it happened last weekend, but now there's some nifty in-car footage of the entire run for your viewing pleasure.

"The FF 91, driven by FF Principal Engineer Robin Shute, finished with a time of 11:25:083, faster than the standing production-designed EV record by more than 20 seconds."

The time would certainly have been a bit quicker (~30 seconds) were it not more a little hiccup along the route that forced the driver to reboot the entire car. Watch for it in the video at the 10-minute, 45-second mark.

Overall race winner at Pike Peak this year was Romain Dumas with a time of 9:05.332 in a revised version of the Norma MXX RD Limited.

Editor's Note:  We should mention that the "production" class record seemingly has a fairly wide definition, as obviously the FF 91 is not yet in production, and the previous mark was set by a modified Tesla Model S (800 lbs was removed, and was "ice" cooled) - watch the Tesla's run from last year here.  The mark before the Tesla was set by a Honda Fit EV in 12 minutes 55.591 second

Los Angeles, 26 June 2017 – Faraday Future successfully tested the limits of FF 91 (“nine one”) in its first attempt to challenge the 4,720-foot ascent of the Pikes Peak International Hill Climb. The FF 91, driven by FF Principal Engineer Robin Shute, finished with a time of 11:25:083, faster than the standing production-designed EV record by more than 20 seconds.

The public engineering endeavor is dedicated to the development of FF 91’s propulsion system and high speed handling, with the powertrain and battery packs stressed to their limits.

“Our real-world testing program is designed to find problems that we would never find in a controlled environment.,” said Pete Savagian, Vice President of Powertrain & Battery Systems. “We’re proud of our time, but this is about the quality of our propulsion system more than just a one-time race. Our focus was on repeatability -- to reach the peak without overheating the vehicle, and to be able to do so again and again.”

“My goal was to push the FF 91 beyond what we thought she could do,” said Shute. “We were able to identify key battery pack relay and system seal issues that will directly result in improvements in the production process. That’s what makes this a successful event for Faraday Future.”

The testing effort at Pikes Peak plays part in Faraday Future’s “Testing the FF 91” video series which will chronicle the detailed testing efforts made by Faraday Future’s engineers to bring a new species of electric mobility to the market and push the limits of FF’s technology in a variety of demanding environments. A full Pikes Peak account will be produced in the coming weeks.