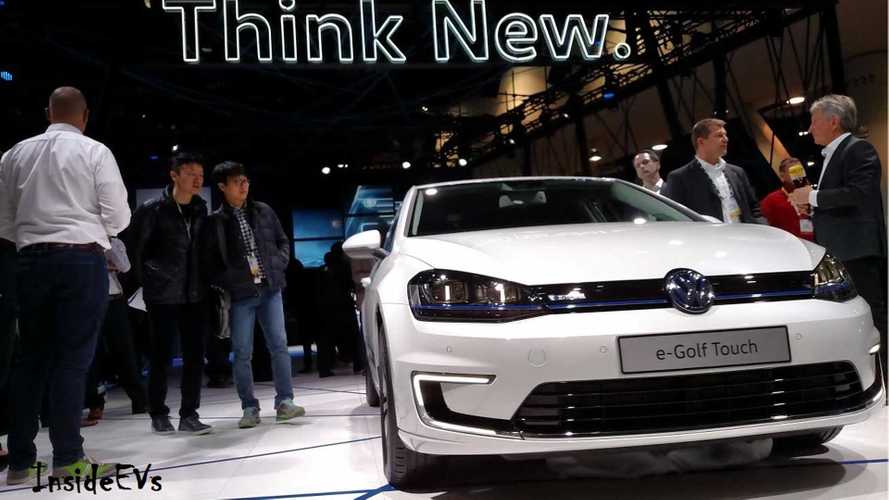 Recently, we heard confirmation that the Volkswagen e-Golf would be a getting a significant range upgrade by the end of this year, to better keep pace with domestic rival BMW, and its recently improved i3 (now with 114 miles of range via a 33.2 kWh battery).

VW e-Golf Touch from CES in Las Vegas In January

“...a heavily revamped VW e-Golf will go on sale at the end of this year or early next year",  with a claimed electric range of 186 miles, up from the current model’s 118 miles/190 kms.

For comparison to "real world" EPA terms, the current e-Golf is rated at 83 miles/134 km.

Mr. Welsch added at the time, "cell technology is moving forward quickly, and will move even faster in future."

Now we have some specifics on exactly what the upgrades will entail, as Electrive.net (German) reports that Dr. Volkmar Tanneberger, VW's Head of Electrical Development, spilled the beans on the 2017 e-Golf at a meeting with journalists from a Formula E race in Berlin this weekend.

"We now go to the new generation (cells)," Mr. Tanneberger stated, saying that the previous 25 Ah cells are on the outs, and the new 37 Ah are in.

The VW exec says this result stays on course with the company's predicted 186 mile/300 km NEDC estimates from earlier this month, but also adds that the "real world" mileage will be about 200 km/124 miles.

Using a "apples-to-applies comparison" on the current US EPA range to the new battery size, would net a range of 123 miles/198 km, so the VW exec is refreshing bang-on-the-money with his mileage estimate it would seem.

Unlike Nissan and BMW who are continuing to offer their "old technology" batteries in their cheaper base trim levels on the LEAF and i3, VW says the current 24.2 kWh battery will be discontinued.  Pricing on the new model was not mentioned during the meeting.

Update: The original source (Electrive) stated that the updated e-Golf's electric motor would move from 85 kW to 120 kW, which was in error. As Motor Talk reports, the actual output of the 2017 e-Golf is 100 kW.

The new longer range e-Golf is expected to arrive by the end of this year. A full generational upgrade for the e-Golf is now not likely to appear until model year 2020.