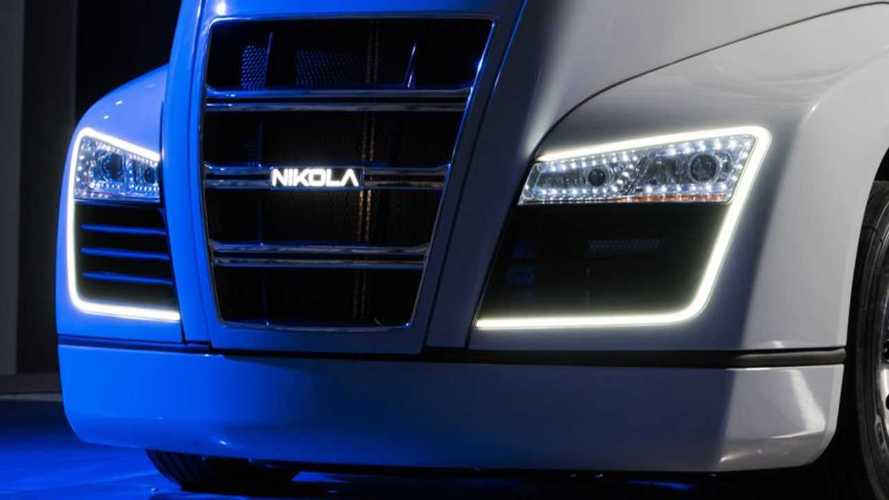 Yesterday afternoon, Nikola Motors released the teaser image (above) of its One semi truck, a hydrogen fuel cell/battery powered heavy hauler. Then, last evening, in Salt Lake City, Utah, Nikola Motors hosted an unveiling event for its truck. Before diving into the details, here's a look at the One in the flesh:

The major takeaways points discussed at the unveiling are as follows:

Unfortunately, no buy price was announced, so we're not sure how costly Nikola One is as compared to a conventional diesel rig.

Nikola Motors made all sorts of other related announcements too. The automaker stated that it will begin constructing its $1 billion factory sometime next year and that production of the One is set to begin in 2020 or so with an outside company, Fitzgerald, handling initial production. Production capacity could be up to 50,000 units per years, claims Nikola. Additionally, Nikola announced the Nikola Two, a non-sleeper cab version of the One. Nikola even announced that it signed Ryder up to be its nationwide sales, service and warranty provider.

And get this...$4 billion in pre-orders for the Nikola One have already been received.

Here's a 42-minute video from the event. It describes in detail some of the various other announcements/claims, such as how Nikola Motors will forever revolutionize trucking and so on.

SALT LAKE CITY. December 1, 2016 -- Nikola (pronounced Neek-oh-la) Motor Company will unveil its highly anticipated Nikola One electric semi-truck tonight at an invite-only event in its Salt Lake City headquarters. The event will be attended by more than 600 members of the media, industry partners, customers and government leaders. For those not in attendance, the event will be live streamed on Nikola’s website: www.nikolamotor.com, beginning at 6:45 p.m. Mountain Time.

The Nikola One utilizes a fully electric drivetrain powered by high-density lithium batteries. Energy will be supplied on-the-go by a hydrogen fuel cell giving the Nikola One a range of 800 - 1,200 miles while delivering over 1,000 horsepower and 2,000 ft. lbs. of torque – nearly double that of any semi-truck on the road. Never has a production model class 8 truck achieved best in-class fuel efficiency while also dramatically improving performance over its diesel competition – all with zero-emissions.

“Nikola will build a world-class advanced manufacturing facility which will create thousands of new jobs,” said Nikola Founder and CEO Trevor Milton. Nikola is currently in discussions with several states to decide who to partner with in its effort to reduce America’s dependence on fossil fuels, advance green energy and revolutionize the trucking industry. The location of the Nikola Motor manufacturing facility will be determined in the first half of 2017.

At this evening’s event, Nikola Motor Company will announce Ryder System, Inc. as its exclusive nationwide distribution and maintenance provider. Ryder has a network of over 800 service locations in North America today.

“We are extremely excited to finally show off the Nikola One to the public for the first time,” said Milton. “There are many out there that wondered if we would deliver, but today we proudly show off the most advanced semi-truck ever built. We couldn’t be more thrilled to have one of the best brands in America, Ryder, as our trusted partner providing nationwide sales, service and warranty for Nikola Motor Company.”

Commenting on the new strategic partnership, Ryder’s President of Global Fleet Management Solutions, Dennis Cooke said, “We commend Nikola for its leadership in zero emission vehicles, and for its decision to partner with Ryder as their exclusive nationwide distribution and maintenance provider. This relationship is key to expanding our advanced vehicle technology portfolio of innovative solutions. Ryder continually monitors emerging fleet technologies and seeks to establish relationships with companies that are leading innovation within the commercial transportation industry.”

In addition to Ryder System’s national coverage, Thompson Machinery, a Caterpillar dealer and an early investor in Nikola Motor Company, will also offer sales and service in Tennessee and Mississippi.

Nikola Motor Company also unveiled it plans for a 1,000 lb., 107 kWh battery pack for its electric UTV, the Nikola Zero. “Our battery engineers have made major advances in storage and cooling,” said Milton. “We believe our lithium battery packs are more energy dense and weigh less than any available vehicle production pack per kWh. This new battery pack should give our UTV over 300 miles of range on a single charge,” added Milton. Nikola plans to offer its patent pending battery packs to OEMs for purchase beginning in 2017.