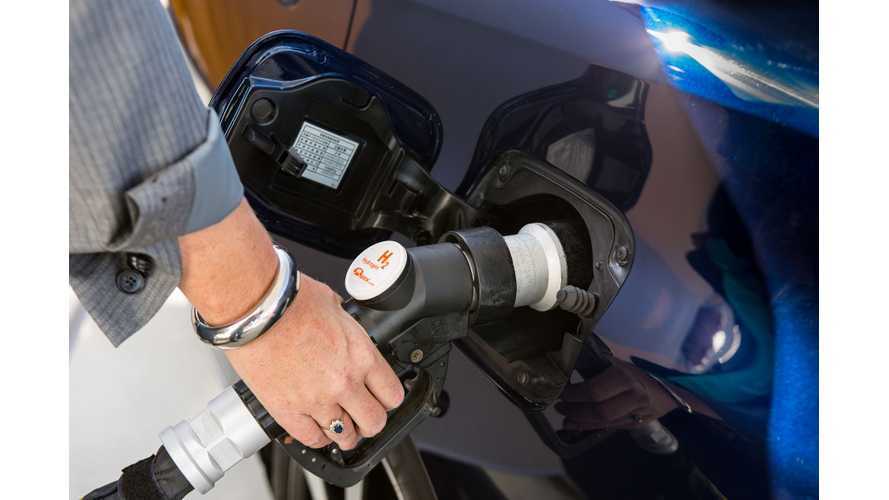 Does The Toyota Mirai Have A Built In Expiry Date?

Now that the 2016 Mirai has arrived in the United States, we have been seeing a lot of reviews on the fuel cell car from Toyota,  such as this one entitled "The first fuel-cell car you, or people richer than you, can buy" by Car and Driver.

And it's a good test drive by the outfit overall, who were also accompanied by Toyota engineer Jackie Birdsall.

The reviewed covered all the basics; the fairly thin fuel cell infrastructure in California, the car's nice driving dynamics, the actual cost to refuel the Mirai, and specifically how to refuel it.

However, what caught our eye (well, actually it caught InsideEVs' community member sven's eye first), is the back of the filling door while it was being refueled.

And while we have heard about this warning label before in passing, we have never actually seen it, as earlier cars and promo shots were of the original Japanese concept cars, not US retail ones.

We assume this has something to do with the lifespan of the hydrogen containment system inside the car.

The question is whether or not the car can be re-certified, or tanks/systems replaced, in order to continue driving the Mirai past this date  - and more importantly for how much?   Especially given the vehicle is now 14+ years old, or if the Toyota Mirai effectively has an expiry date of 14-odd years?

Editor's note:  We assume the Mirai tanks have a 15 year certification rating before the car is manufactured, so the consumer receives that maximum amount of useful life - minus the time it takes to ship and then sell the Mirai.

As a point of interest: The average car on US roads lasts about 11.5 years, with the higher priced/more exclusive cars lasting proportionally longer.