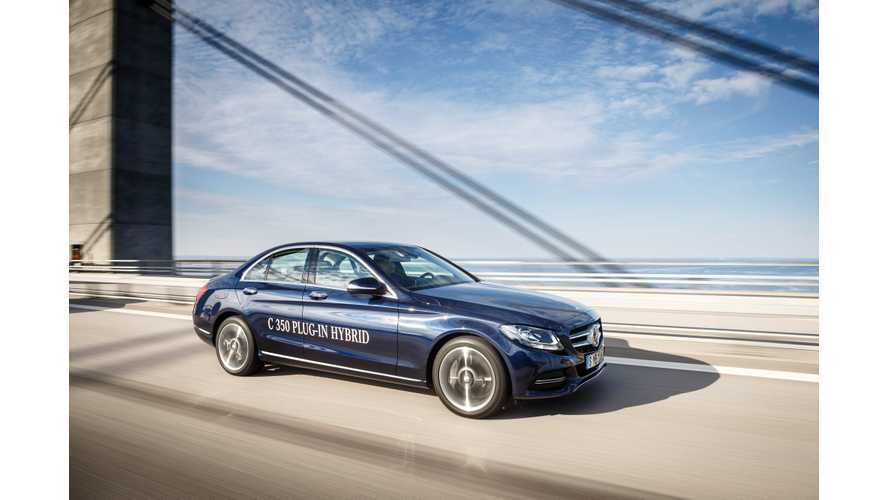 C350 Plug-In Hybrid, officially renamed to C350e, is the second in a line of 10 new plug-in hybrid models announced by Mercedes-Benz.

With NEDC range of 19 miles (31 km) on the 6.2 kWh lithium-ion battery, we don't expect too much on the electric side, but Daimler seems okay with low-range plug-ins.

Autocar begins its review with the overwhelming number of driving modes - four Economy, Comfort, Sport, Sport+ and Individual for performances combined with another four Hybrid, E-Mode, E-save and Charge.

"Driving the C350e can be as simple or as complex a process as you wish. There is a dazzling array of driving modes – Economy, Comfort, Sport, Sport+ and Individual – and on top of that there are four operating modes for the hybrid system: Hybrid, E-Mode, E-save and Charge.

In truth, there’s too much choice; this almost seems a car made for engineers and road testers. As an everyday ownership proposition you’re never realistically going to be flicking through the driving modes to best suit the next few hundred metres of road in front of you. So it's best to remember you’ve bought this car because it’s a hybrid, so stick it in Economy and make the most of the hybrid system's four modes.

I say four, but you’re really only going to use one of them: Hybrid mode. Here, you get to drive the car on electric power alone should you wish, making use of one of the car’s cleverest features. There is a haptic throttle pedal, which only allows you use of the electric power to a certain point of resistance. But push beyond it and the four-cylinder engine kicks in for greater boost."

Then, when you finally figure out which mode to use, you will quickly learn that plug-in hybrids are most suited for driving around town on battery power alone.

In the case of the C350e, the driving experience is much better in EV mode than hybrid mode on the highway. Because C-Class models typically cover serious motorway mileage, Autocar struggles to find reason why to buy C350e - "At town speeds it is simply as smooth and refined as cars in this segment come, but on the motorway it never reaches the same heights."

"The real highlight of the C350e is when you drive it through town on electric power. It's quiet, smooth and nippy, and really is a very premium and thoroughly modern driving experience, so much so that it feels like something from a class or two above - a baby S-Class, even.

That premium halo slips when the four-cylinder engine kicks, be it because the battery has run out of juice or you need extra grunt up a hill. It is far too gruff and vocal, and feels tuned to the benefit of economy and the detriment of refinement. Shame.

The C350e is only available in Sport trim, which means plenty of equipment inside and out including leather, parking assistance systems and navigation. The trim also includes Mercedes’ Airmatic air suspension as standard, which makes for decent ride quality, particularly around town, and lessens the impact of that extra quarter of a tonne of weight the hybrid system adds over a standard four-cylinder petrol model."