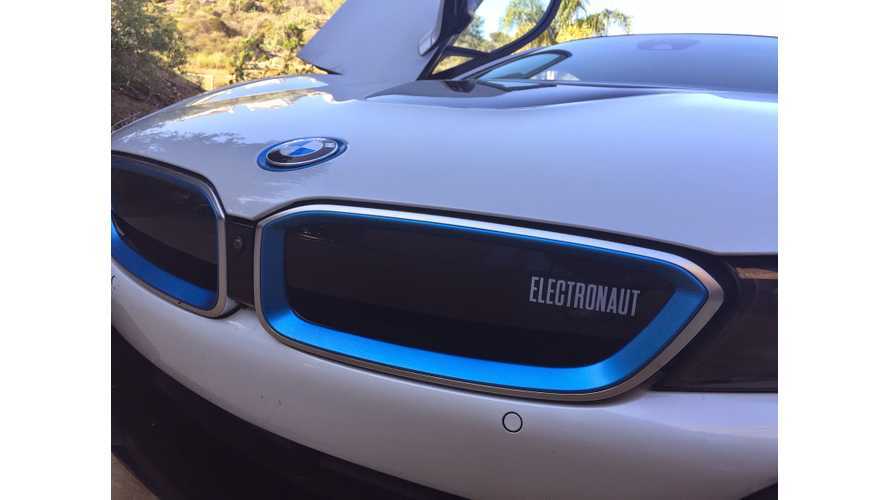 It’s a very, very special car for Julie and me.

We have spent the past six years of our life exploring the electrification of cars and powering those cars and our home by solar energy. While I never considered owning such a car, it became possible as our careers benefited by our efforts and our cost of powering a home and cars was greatly reduced.

It’s our life and our experience… our walk as it were… that we celebrate with the 2014 Electronaut Edition of the BMW i8.

Subtle and beautiful on the door

When the doors are open, everyone can see the Electronaut Edition

It's like a jewel case for the Electronaut badge that you can see when walking around the car.

There were several hundred drivers across the globe that field tested the BMW Mini-E and the BMW ActiveE, contributing to the development of the BMWi brand, the BMW i3, the BMW i8 and all the BMW's with plugs that will follow these first two cars. At the release of the BMW i3, a Special Edition was made that was only available to these few drivers. A few hundred of these drivers including Julie and I transitioned to the BMW i3 Electronaut Edition.

Naturally through the years, many events and activities, we formed a warm relationship with the leadership of the BMWi division in the USA. As we contemplated getting the BMW i8, I asked if we could do an Electronaut Edition to memorialize our journey. Julie and I wanted a 2014 first year Electronaut Edition of both the BMW i3 and the BMW i8.

We are grateful and thankful for the assistance of BMWi in helping us bring this special car to our home. The BMW Electronaut accessories (available only to Electronauts) look simply stunning on the BMW i8 with the blue stitching, blue seatbelts and frozen blue trim elements of the car.

Here’s the long version of the story.

The year was 2008, a couple of years prior, Julie and I had built our home in Carlsbad California, as a net zero energy home powered by solar energy.

In 2008, BMW announced that they were going to be entering the electric car world with a hand built prototype and were seeking a few hundred private individuals to become Pioneers, to become divers of the BMW Mini-E.

Our minds raced with the possibility of partnering our home and existing Solar PV system on our roof, with an electric car such as the BMW Mini-E, being charged by sunshine in the garage. Can it work for us? Can it work for others? I wanted to push the envelope of this new frontier, to explore what was possible in sunshine powered transportation.

Today, just 6 years later, the progress has been nothing short of amazing, from a few hundred cars and just two models by two companies (Tesla Roadster and BMW Mini-E) in 2009, to nearly 300,000 cars with plugs representing most of the major automotive brands. Today BMWi , not yet conceived in 2009, is a worldwide recognizable brand. Today our home with two BMW i3s is powered 100% by sunshine.

My advocacy remains largely the same as 6 years ago. The vast majority of Americans only know of Solar PV as a way to offset and save on home utility cost. I know that Solar PV has its greatest value both environmentally and economically, when used as a transportation fuel.

Kind of weird that we both dressed in the colors of our car. We did not plan that!

BMW should most justifiably, be very proud of their efforts and risk taking (who else has asked several hundred everyday drivers to help drive their hand built prototypes?) culminating in their first two retail offerings, the 2014 BMW i3 and the 2014 BMW i8. The marketplace is greatly rewarding BMWi with wonderful reviews and robust sales. It’s a historic pivot point towards electric mobility for this 100 year old company.

It has also been a very personal journey for the drivers, the Pioneers and Electronaut’s that preceded the launching of the BMWi retail offerings.

It’s easy to be dismissive or derisive of BMW for putting these few hundred drivers, who paid via a lease payment, to be in the driver’s seat of the prototypes. Some called it a PR stunt, a marketing effort or a CARB compliance ploy. Some called the drivers fanboys, cheerleaders, dupes, shills, or worse. History now records that it wasn’t a CARB compliance ploy, but rather, it was BMW charting a logical path towards its global future and the future of transportation.

What we drivers were was pioneers and pilots, we played a crucial central role in the development of electric mobility for BMW. I have no doubt that it was our collective positive experience as drivers that helped convince BMW to push the green button on billions of dollars of investments launching BMWi, and that we helped shape the trajectory of the company.

I have no doubt that if we as drivers had a poor experience in the Field Trial, if we had come to the realization that these cars did not work for us in our daily lives, that BMW would have ended the experiment right there and “parked it on the shelf” for another decade or so, thus a tragic repeat of the GM EV1 program.

We weren’t cannon fodder, unknowing helpless lab rats… we were pilots. We Pioneer’s and Electronaut’s drove these incredible machines, the BMW Mini-E and the BMW ActiveE. We lived with them 7/24 for almost 5 years and out of all the individuals working in various ways to bring these cars to the marketplace, it was the pilots of these cars who had the most intimate and knowledgeable understanding of electric mobility. We were poked, prodded, researched and studied to see how these cars integrated into our households and daily life.

We followed the rules, we broke the rules, we made new rules, we went fast, slow, far, short, high and long, we stuffed our cars, we pampered, we abused, we used them in both intended and unintended ways, we broke them, they broke, we competed East Coast against West Coast, we put millions of miles on these machines collectively. We suffered, we celebrated and we bonded in this common experience that we undertook. We partied and we met up….a lot, still do.

Like any real and healthy relationship, It was not all peaches and cream. We had fan, PCU, Darth Maul, neutral, spline, KLE, CEL, and software failures. We even had a magical locked box with a padlock, a golden box that was to remain unopened. If opened and the genie escaped, the driver was barred from the program and teleported to a life in exile on Gilligan’s Island.

Don't even think about it!

For many of the drivers, myself included, the experienced altered our own trajectory through life. We knew of something great and we wanted to bring it forward. We became involved in legislation, politics, we demonstrated, we advocated, we held rallies and meet ups. We EVangelized.

So our individual history as pilots of these great cars that preceded BMWi, is equally as important to us as BMW’s corporate history.

It’s not the time to fly the “Mission Accomplished” banner across the flat top of our Interstate Highways. It is time to say “Mission Started” We’re just at the beginning, peering out the front windshield towards an electric future. Sunny days ahead.

Thank you to all who drive with a plug.  Respect and admiration to those that came before.