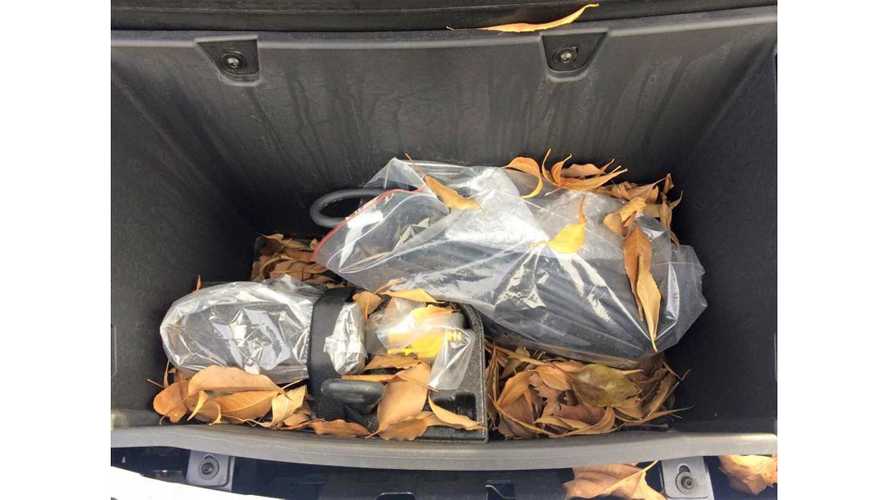 The front storage compartment (Frunk) of my i3 after driving a few weeks on the salt-covered winter roads of New Jersey - yuck!

First, let me begin by saying I was one of the people who really didn't mind the fact that the i3's front storage compartment (affectionately called the "frunk" by many since Tesla initially coined the term for the area under the hood of the Model S) wasn't waterproof. I never envisioned keeping anything up there that I would need to access frequently and since my Electronaut Edition i3 came with a nice storage bag that would keep whatever I put in there nice and dry, it was really a non-issue as far as I was concerned.

It looked a little better when I first got the car. Of course everything looks better new, but being exposed to all the elements means you really can't store anything up there that isn't waterproof & durable

It was so inconsequential to me at the time I didn't even list it as a minor annoyance when I did my initial likes & dislikes posts back in June. Well after living with the car for nine months now, I have some different perspectives and I think I'll soon go back and do an update on what I like and don't like about the i3. One of the things I'll add to the dislike list is the fact that the frunk area is easily penetrated by moisture, dirt, leaves and anything else that would find its way under the hood of a traditional ICE car.

So why didn't BMW make this area waterproof? I have never gotten an official answer but my guess is because it would add weight and cost. Plus, since it is such a small compartment, they figured the vast majority of people would only use it for things like extension cords, a tool kit and the occasional use EVSE, all of which are OK to get wet once in a while. They probably also figured most people would get a bag to put those items in, and they even sell one such as the one that I have. Because I have an Electronaut Edition i3, mine was free and embroidered "Electronaut Edition." It keeps the items in the bag clean and dry, but the bag itself gets very dirty and isn't really pleasant to handle when it's covered in dust and now road salt.

Which one would you prefer to handle?

The i3 has a lot of mechanical components up in the frunk area; they are just hidden by the removable screens on both sides of the frunk. Once you remove these snap on screens, you can see that area looks basically like a traditional ICE engine compartment, minus the engine of course. The storage compartment only occupies a small section of that area as opposed to the Model S. Since the Model S is so much larger than the i3, Tesla was able to utilize a huge portion of the area under the hood for storage, creating a large front trunk which they called the frunk and still have enough room to fit whatever mechanical parts they located up there. The i3 didn't have much space to spare since the front area of the car is so small, so the storage compartment seems like more of an afterthought than something that was a well planned design feature.

After removing the plastic frunk, and the snap-on shields on both sides of it, what you see looks very similar to a conventional gasoline or diesel powered car (minus the engine!) Photo credit: Tim Hood

If waterproofing the entire area up there just wasn't cost effective, or if it was going to add too much weight, then I do understand the reasoning, but what they should have done was provide a nice frunk cover that could snap on and provide - at the very least - a water-resistant seal. Perhaps some ingenious entrepreneur will manufacture and sell such a cover...

* If you want to use my car as the mold you know where to find me, and I'll be your first customer ;)